The first day of the WSK Final Cup unfolded this Friday on the Adria International Raceway with the Qualifying practice and the opening Qualifying Heats taking place between the 220 drivers entered in the four categories being 60 Mini, OK-Junior, OK and KZ2. 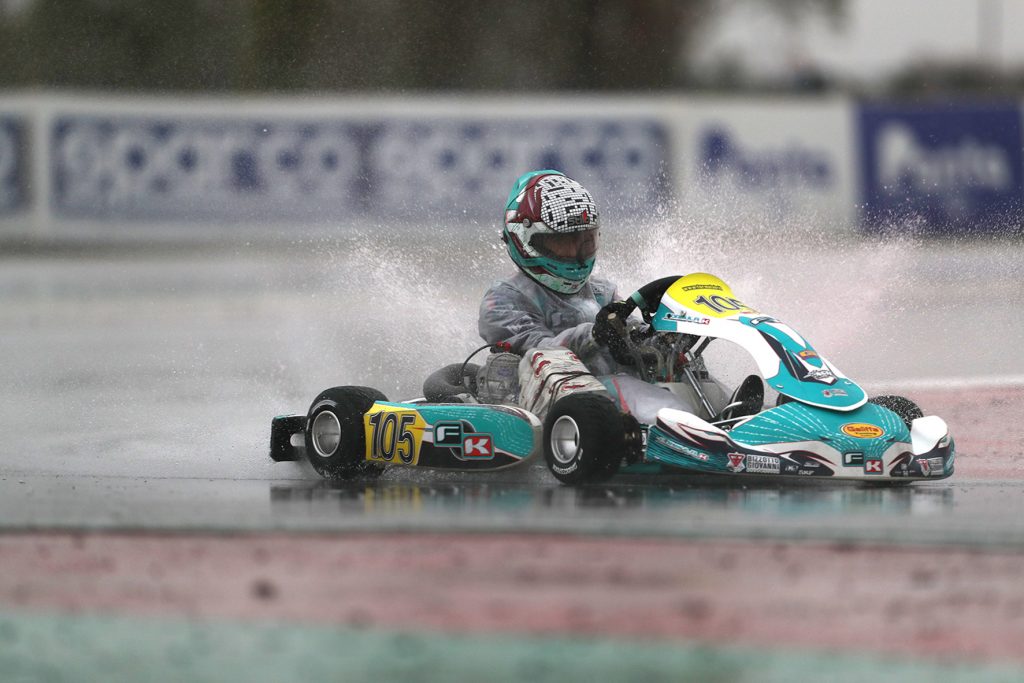 The WSK Final Cup proved again how challenging the WSK competitions are with more than 220 entrants coming from 40 countries from all around the world battling on the wet asphalt of the track. The qualifying stage and the first series of heat races took place in rainy conditions.

KZ2: Leonardo Bizzotto is the polesitter

The KZ2 class opened with the outstanding performance of the Italian Leonardo Bizzotto (Formula K/TM), the fastest in Qualifying thanks to his 1:04.903 lap performance. Behind him, another Italian, Matteo Zanchi (GP/TM) came second, followed by the Swede Jesper Sjoberg (CRG/TM). The result of the first heat was completely different with the victory going to Zanchi, followed by Lorenzo Giannoni (Sodikart/TM) and the French Jean Nomblot (Sodikart/TM).

Lorenzo Travisanutto was the best in OK with a fastest lap in 1:05.079 ahead of the Brit Joseph Turney (Tony Kart/Vortex) and the Spaniard Josep Marti Sobrepera (Tony Kart/Vortex). In the afternoon, Turney proved his race pace by winning the first heat of the weekend with Travisanutto finishing second. In the following race, the winner was the German Hugo Sasse (Parolin.TM).

The Russian Nikita Bedrin (Tony Kart/Vortex) had a great start in OK-Junior with the best time with 1:06.276. The Russian will have to deal with Christian Ho (KR/IAME), second ahead of the Dutch Robert De Haan (Energy/TM). Other drivers joined the list of the frontrunners with the Italian Andrea Kimi Antonelli (KR/IAME) while in the second race, the winner was the Australian James Wharton (Parolin.TM).

In 60 Mini, the pole position went to Rashid Al Dhaheri (Parolin/TM). He locked up the best lap in 1:15.089 in front of Kirill Kutskov (Energy/TM) and Luis Iglesias (IPK/TK). The first heat went to Kutskov who beat Al Dhaheri,. The second race was won by another Russian, Dmitry Matveev (Energy/TM) ahead of Iglesias. The last scheduled race went to the Chinese Yuampu Cui (Tony Kart/TM) who won the third heat ahead of the French Jules Caranta (Tony Kart/TM).