The Qualifying Heats of the WSK Final Cup took place this Saturday on the Adria International Raceway where Jean Luyet (KZ2), Lorenzo Travisanutto (OK), Andrea Kimi Antonelli (OKJ) and Dmitry Matveev (60 Mini) topped the provisional classifications ahead of the Prefinals and Finals scheduled tomorrow to name the final winners of the 2019 season by WSK Promotion. 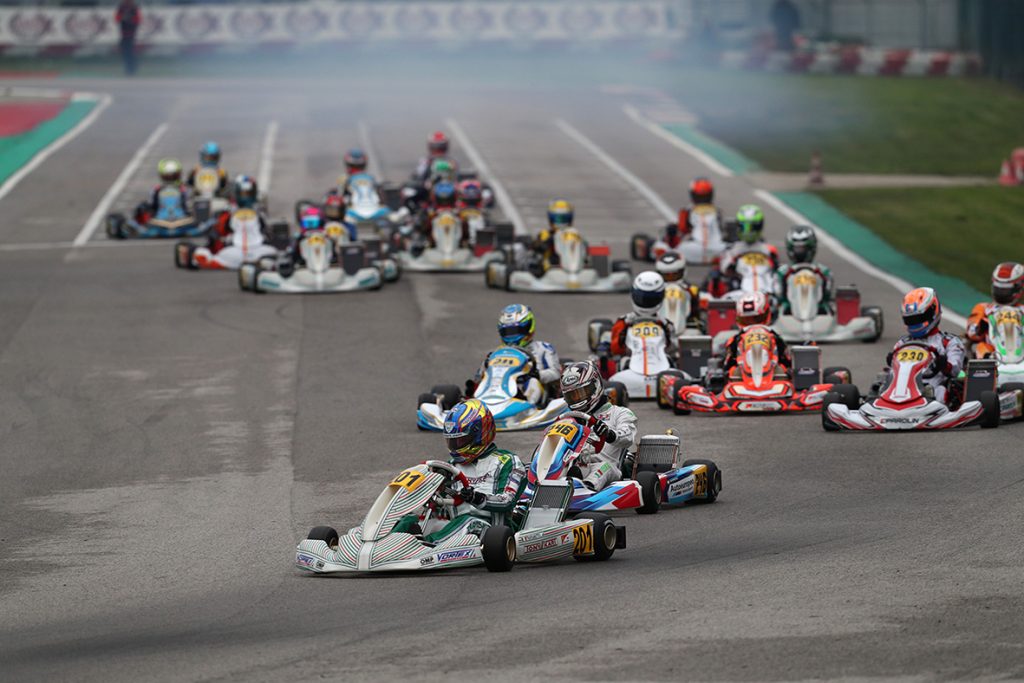 This Sunday, the Adria Karting Raceway will celebrate the winners of the WSK Final Cup, concluding the WSK Promotion international karting calendar. With over 220 drivers on track, the qualifying phase has been completed with 26 heats unfolding after the initial six races of yesterday.

Lorenzo Travisanutto (Tony Kart/Vortex) showed how serious his victory intentions are in the WSK Final Cup, winning two OK races following his pole position and the second place gained in the initial heat. The British driver Joseph Turney (Tony Kart/Vortex) reached the second rank in the provisional standings and will start on pole in the Prefinal B, like Travisanutto in the Prefinal A.

The Russian Kirill Smal (Tony Kart/Vortex) will start alongside the Italian thanks to two seconds and a fourth place, like Taylor Barnard (KR/IAME) who will try to give Turney a hard time. Despite a victory each at the end of the day, difficulties along the way slowed down the German Hugo Sasse (Parolin/TM) and the Dutchman Dilano Van’t Hoff (Exprit/TM) who will start further back on the grid tomorrow.

With four victories in four races, Andrea Kimi Antonelli (KR/ IAME) gave an adequate response to the Russian Nikita Bedrin (Tony Kart/Vortex), polesitter and winner of one race today. Both will be on the front row of tomorrow’s Prefinal A with the Italian on pole. Good performance by the Dutchman Rober De Haan (Energy/TM) who claimed the pole in the Prefinal B thanks to two successes with the Brit Arvid Lindblad (KR/IAME) joining him on the front row. The Australian James Wharton (Parolin/TM), the Polish Tymoteusz Kucharczyck (Parolin/TM) and the Norwegian Martinius Stenshorne (KR/IAME) concluded their day with a win.

The fight in 60 Mini is on, as shown by the performance of the Russian Dmitry Matveev (Energy/TM) who ended with the pole position for the Prefinal A with four heat victories. His fellow countryman Kirill Kutskov (Energy/TM) scored two wins and three second places to take pole in the Prefinal B. The Chinese driver Yuampu Cui (Tony Kart/TM) joins Matveev on the front row while Rashid Al Dhaheri (Parolin/TM), yesterday the fastest in Qualifying, remains on the front row in the Prefinal B, having won two races. Alternate fortunes for the other winners, the Russian Maksimilian Popov, the Danish August Therbo, the Polish Jan Przyrowski, the Thai Enzo Tarnvanichkul (all on Parolin/TM) and the Russian Gerasim Skulanov (IPK/TM).

Jean Luyet (CRG/TM) emerged as the surprise of the day in KZ2. The Swiss took the victory in the two heats after Leonardo Bizzotto (Formula K/TM) had set the fastest time in Qualifying and Matteo Zanchi (GP-TM) won the opening race. The Frenchman Jean Nomblot (Sodikart/TM) completes the front row on the Prefinal’s starting grid as he finished today’s races in close range from the Swiss. Behind the two, the second row will be composed of Zanchi and the Swedish Benjamin Tornqvist (CRG/TM).