The more than 180 drivers entered in the opening round of the WSK Euro Series went through their respective Qualifying Heats, this Saturday on the Circuito Internazionale di Napoli. Sunny and very hot weather made the scene for some thrilling racing on track where Oliver Gray (OK), Brando Badoer (Junior), Kean Nakamura Berta (Mini 60) and Simo Puhakka (KZ2) emerged as provisional leaders before Sunday’s Prefinals and Finals. 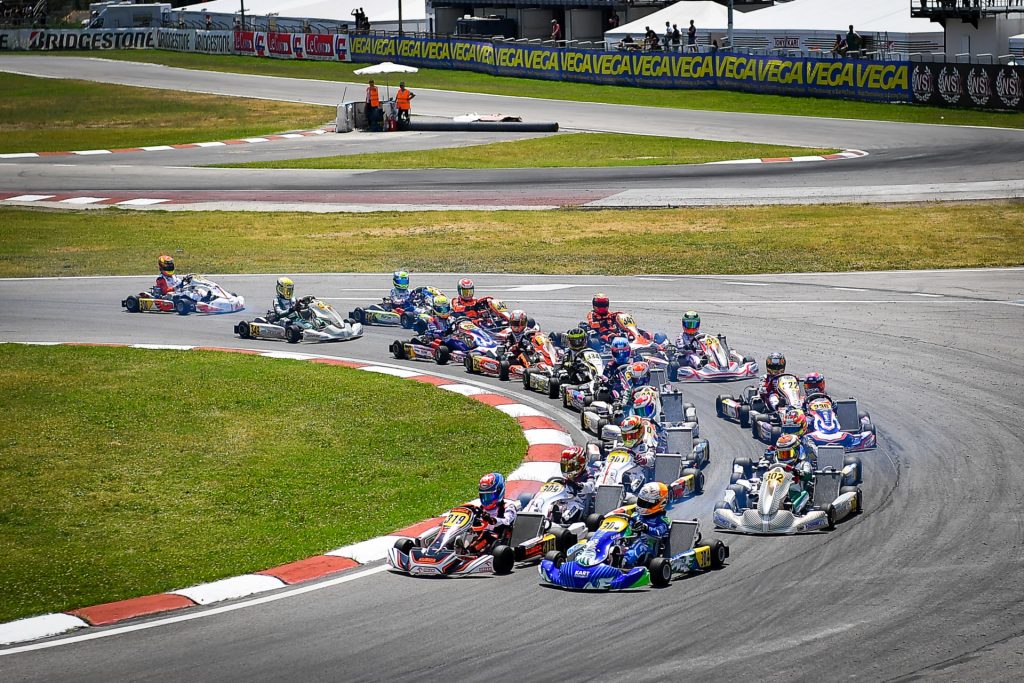 The Brit Oliver Gray (Birel ART/TM) confirmed his speed of yesterday, adding two more wins as well as a second place to his tally, securing the pole position for Prefinal A. The Finn Juho Valtanen (KR/IAME) took two victories with a pair of second positions and will start the Prefinal B ahead of the field.

Taylor Barnard (KR/IAME) classified in third place, followed by Joe Turney (Tony Kart/Vortex) and Andrea Kimi Antonelli (KR/IAME) who put in a crescendo of results, especially towards the end of the races when claiming two wins and a second place. The Brazilian Rafael Camara (Exprit/TM) took one win as much as the Brits Joe Turney (Tony Kart/Vortex) and Taylor Barnard (KR/IAME).

After claiming both the overall pole position and his first win yesterday, Brando Badoer (KR/IAME) was challenged by Tuukka Taponen (Tony Kart/Vortex) who took three wins. Still, the Italian confirmed his speed placing himself behind the Finn in all the heats. Badoer will start Prefinal A from pole while Taponen will do likewise in Prefinal B.

Kean Nakamura Berta (KR/IAME) showed some great pace throughout the heats, finishing on top of the class with one more race won along with a second place behind the Spaniard Christian Cotoya Sanabria (CRG/TM), who classified fourth. Jan Przyrowsky (Parolin/TM Racing) ended up in second place, inheriting pole position for the Prefinal B.

Dmitry Matveev (Energy/TM), the WSK Super Master Series winner, went through some tough time since the start of the weekend. After failing to set a lap time in Qualifying, he had to recover from the back of the grid in all of his heats, nevertheless securing one win, as much as James Egozi (Tony Kart/Vortex), Tiziano Monza (KR/TM), Maciej Gladysz (Parolin/TM), third, and René Lammers (Parolin/TM), fifth overall.

In KZ2, Matteo Viganò (Birel ART/TM) came to the fore by dominating the first two heats. The Italian could have well ended as class leader before having to retire halfway through the last heat, which opened the way for Simo Puhakka (Tony Kart/Vortex).

Riccardo Longhi (Birel ART/TM) put in regular performances and classified in second overall ahead of his Birel ART team-mate Giuseppe Palomba (Birel ART/TM). The fastest in Qualifying on Friday, Adrien Renaudin (Sodikart/TM) tried to slide in the battle but finished sixth on three occasions. Alex Irlando (Birel ART/TM) rounded up the Top 5 with a pair of fifth places as best results.