Oliver Gray (OK), Brando Badoer (Junior), James Egozi (Mini 60) and Adrien Renaudin (KZ2) lapped the fastest in their respective qualifying sessions, this Friday, July 10th, for the kick-off of the WSK Euro Series on the International Circuit of Sarno. The opening Qualifying Heats saw other contenders getting their weekend off to a strong start as well. 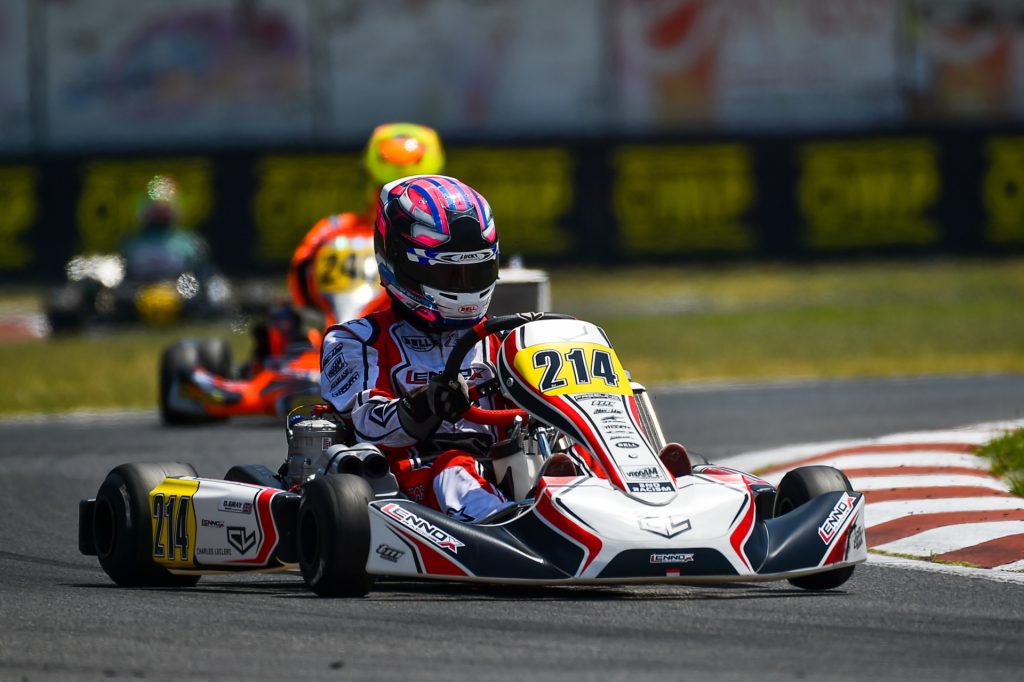 Out of the 48 drivers on track in the OK class, Oliver Gray (Birel ART/TM) was the fastest in this morning’s Qualifying session, achieving his maiden pole position for Leclerc by Lennox Racing in 56.520 seconds. Andrea Kimi Antonelli (KR/IAME) topped the second group but missed out on the overall pole for 0.073 seconds! Second in the opening series, Taylor Barnard (KR/IAME) inherited the third position ahead of Juho Valtanen (KR/IAME) and Clayton Ravenscroft (Birel ART/TM).

The Qualifying Heats opened with a win for Barnard who led from start to finish (C-E). Dilano Van’t Hoff (Exprit/TM) climbed up to second in front of Laurens Van Hoepen (KR/IAME). Joe Turney (Tony Kart/Vortex) took victory as well in the B-D race ahead of Valtanen and James Wharton (Parolin/TM) after Antonelli was penalized for front fairing.

The third race (A-E) led to a fight in the early stages between Ravenscroft and Gray before the latter built a bridge big enough to seal the win, while Enzo Trulli (KR/IAME) completed the Top Three. Barnard took his second win in the C-D race but was penalized with three seconds for not respecting the starting procedure, which offered the first place to Valtanen, ahead of the Brit and Luigi Coluccio (Kosmic/Vortex).

First on track in Qualifying, the 51 entrants of the OK-Junior class were once again led by Brando Badoer (KR/IAME) who set the fastest time in the opening series in 57.765 seconds. Igor Cepil (KR/IAME) took the best lap in the following group but felt half a second short to claim pole position. Tymoteusz Kucharczyk (RK/TM) was classified in third, followed by Alex Powell (KR/IAME) and Alfio Spina (KR/IAME). Seventh-fastest of the first group, the WSK Super Master Series victor Arvid Lindblad (KR/IAME) ended up with the 13th-best performance.

Spina claimed the first heat of the weekend (C-E) by dominating the opposition led by Kucharczyk while Lindblad made two positions up to third. Coskun Irfan (Kosmic/Vortex) climbed an impressive 12 places up to sixth. In the second race (B-D), Ugo Ugochukwu (KR/IAME) got the upper hand on Cepil and Freddie Slater (Kosmic/Vortex).

In the A vs. E confrontation, Badoer secured an easy win in front of a recovering Maxwell Dodds (Parolin/TM) with Karol Pasiewicz (Tony Kart/Vortex) in third. The last heat of the day (C-D) went to Slater, pulling off a strong recovery from eight on the grid, ahead of Kucharczyk and Powell.

In a very disputed Qualifying, James Egozi (Tony Kart/Vortex) set the best performance, 1:05.751, in his last attempt again the clock. The young American was followed by Maciej Gladysz (Parolin/TM), fastest in the Series 1, Lenn Nijs (KR/TM) and Revolution Motorsport team-mates Francesco Amendola and Marcus Saeter (both on Energy/TM). Dmitry Matveev (Energy/TM), winner of the WSK Super Master Series, concluded the session with no laps completed.

Kean Nakamura Berta (KR/IAME) produced his effort in the following race (B-D) against Clément Outran (KR/IAME) who went from ninth to second with the fastest lap, and Gladysz. Rene Lammers (Parolin/TM) defeated Guillaume Bouzar (Parolin/TM) and the polesitter Saeter in the A vs. E race, before Nakamura Berta made it a double win in the C-D heat against Przyrowsky and Christian Costoya Sanabria (CRG/TM).

Adrien Renaudin made his return on top of the KZ2 timesheet with the fastest Qualifying performance in 55.389 seconds, just 0.034 ahead of Matteo Vigano (Birel ART/TM). Birel ART team-mates Giuseppe Palomba and Riccardo Longhi (both Birel ART/TM) followed in third and fourth, with Viktor Gustafsson (Birel ART/TM) and last week’s double-winner in Adria Simoh Pukakka (Tony Kart/Vortex) taking the fifth and sixth lap times within the same tenth of a second!

At lights out in Heat 1, Vigano got past Renaudin and pulled away in the lead until the finish line, crossed in front of Longhi and Palomba, with Puhakka in fourth followed by Gustafsson and Renaudin.

You may also be interested in: More than 180 drivers on track for the WSK Euro Series opener at Sarno