The fight for the 2020 IAME Euro Series titles was turned upside down in another exciting race meeting from September 18th to 20th on the 7 Laghi Circuit of Castelletto di Branduzzo. In Senior, Edoardo Villa achieved a dominant win on home soil, Aaron Walker emerged victorious in a tight Junior Final, while Cathal Clark was awarded his second consecutive success in Mini! 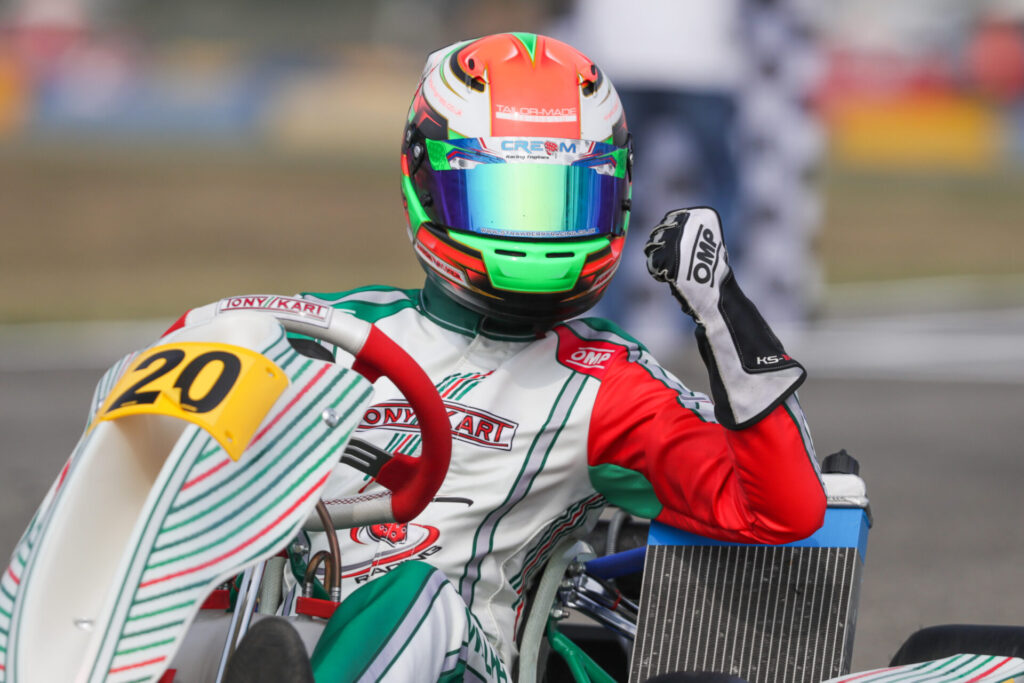 After France’s Aunay-Les-Bois, the 7 Laghi Circuit of Castelletto di Branduzzo, in northern Italy, provided another exciting layout for the competitors in the Senior, Junior and Mini class to show their skills and speed in the second round of the 2020 IAME Euro Series.

The Italian Edoardo Villa took over from Essay’s winner Callum Bradshaw, absent in Italy, by dominating a strong Senior field of more than 40 entries. Aaron Walker clinched his first series win of the year in Junior, while Cathal Clark inherited another success in Mini following a post-race penalty for Fionn McLaughlin! Esteban Masson, Bart Harrison and Luna Fluxa were named “Drivers of the Day”.

Once again, the event had high definition video stream coverage throughout the entire duration of the weekend and additional behind the scenes video footage, like drivers and officials’ interviews, showing the continuous commitment of RGMMC to the good promotion of its races.

Villa kept his winning momentum coming to Sunday. Winner of the morning’s Prefinal, he dominated the 20-lap Final from pole position to chequered flag. Shields made his way from fifth to second, in front of his teammate Butcher who pulled off a six-place recovery! Platten crossed the line in fourth position but was classified outside the top 10 following a penalty. Caden Mcqueen (Croc Promotion) inherited the top 4 ahead of Esteban Masson (Privateer). The Frenchman recovered seven positions, earning him a well-deserved “Driver of the Day” trophy.

Friday’s Qualifying had not yet started that drama struck in the Junior class. Oliver Greenall and Bart Harrison, both fastest in Free Practice, missed the pre-grid and were forced to start their heats from the back of the grid. The Dutchman Senna Van Soelen (Privateer) took the overall pole position ahead of Yani Stevenheydens (Privateer), Freddie Spindlow (KR Sport), Riccardo Cirelli (ASD Autoeuropeo Motorsport) and Pol Chaos Rivero (FA Racing Spain), while the provisional standings leader Santiago Vallve (Kart Republic Spain) posted the seventh-best time.

The Qualifying Heats turned out at the advantage of Aaron Walker (Strawberry Racing). Qualified a distant 10th, the young Brit scored a win, a second and a fifth place to end up ahead of the class ranking. Greenall also strongly overcame his early troubles with two third places and climbed the field up to second. Spindlow was classified third, thanks to two fourth places, ahead of Bart Ploeg (Privateer), winner of the opening heat race, and Harrison whose best result was second. Van Soelen and Stevenheydens, who both started on the grid’s front row, were ranked in seventh and eighth position. Walker, having secured the Final’s pole thanks to his win in Prefinal, led Sunday’s main race from lights to flag despite Ploeg’s determination. The Dutchman kept pressuring his rival during 20 laps but could not find a way through and had to settle for second place. Greenall, third, came close to the win after achieving one of the weekend’s recoveries from 14th. Chaos Rivero completed the Final in fourth place ahead of Harrison, named “Driver of the Day”.

Filippo Sala (Team Driver Racing Kart) grabbed the pole position on Friday, 0.006 seconds faster than Fionn MacLaughlin (Fusion Motorsport) and Tiziano Kuzhnini (Spirit-Racing.CH). Since both the Brit and the Swiss driver set the exact same lap time, they were separated by their second-best performance, at the advantage of MacLaughlin. Edu Robinson and Round 1 winner Cathal Clark (both on Fusion Motorsport) completed the qualifying top 5. The heats led to the second chapter in the battle between MacLaughlin and Clark. The former had the upper hand with two wins while his British countryman always finished within the top 3. Sacha Van’t Pad Bosch (Fusion Motorsport) climbed to provisional third, followed by Kuzhnini and Lewis Wherrell (Fusion Motorsport). The polesitter Sala ended up in seventh.

The final fight of the weekend went down to the wire between the youngest of the IAME drivers. MacLaughlin, on pole thanks to an easy win in Prefinal, led the field with Leo Robinson (Fusion Motorsport) on his tail. The British driver made the leader’s life difficult by taking and even holding the lead until the last lap, where Clark, having recovered from fifth, joined in for one last showdown. McLaughlin regained the first place while Clark made a late move on Robinson. The three crossed the finish line in that order before the winner had his result canceled by a front fairing penalty. The decision handed a second consecutive victory to Clark ahead of Robinson with Van’t Pad Bosch completing the podium. Luna Fluxa, fourth in front of Kuzhnini, completed Fusion Motorsport’s domination in Mini and was elected “Driver of the Day” for her best-ever result!

With the emergence of new contenders at Castelletto, the battle for this year’s titles is far from over. Harry Platten is the new leader of the Senior field, just three points ahead of Guy Cunnington and six to Ayrton Fontecha. Enzo Lévêque, who was leading after Essay, fell down to fourth place on equal points (151) with Caden McQueen.

In Junior, Aaron Walker built himself a 14-point gap over Bart Harrison who is leading a close field of protagonists including Freddie Spindlow, Santiago Vallve and Oliver Greenall, all split by just four points.

In the Mini category, Cathal Clark has now a small four-point mattress on his closest rival Tiziano Kuzhnini, while Leo Robinson, Adrian Ferrer Benito and Thomas Strauven can all have one last say in the series’s closing round.

As always, there was live video stream and commentary coverage during all official sessions, which was available to stream worldwide, provided by RGMMC Productions’ professional video crew.

The class titles of the 2020 IAME Euro Series will be awarded in the third and final round of the competition, taking place on the Karting des Fagnes International Raceway of Mariembourg, in Belgium, on October 8-11.