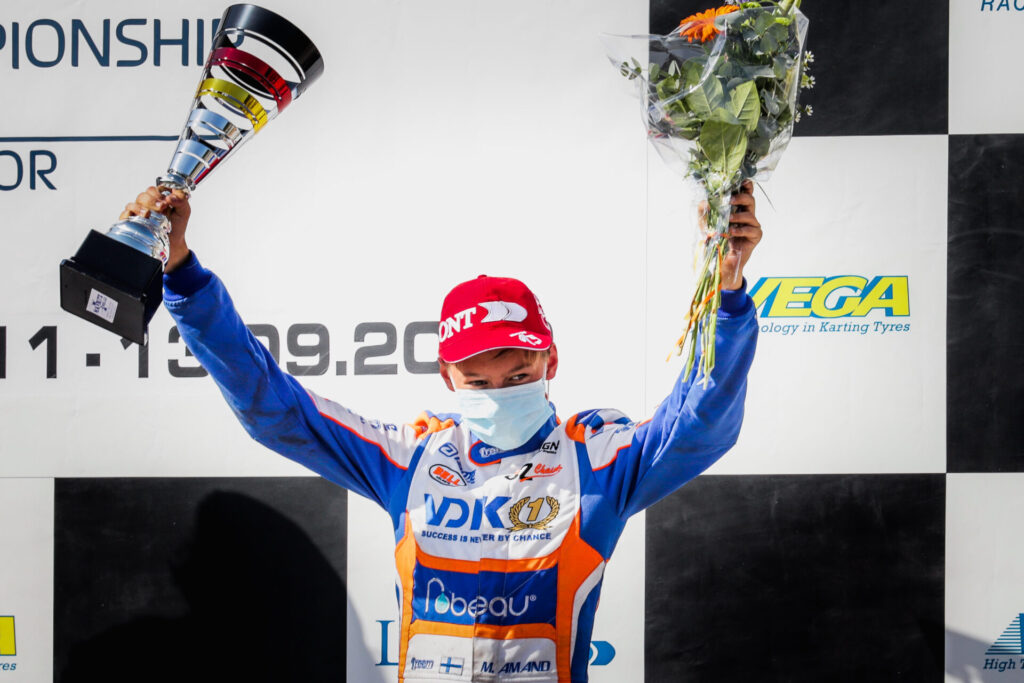 Trophy and flowers for Marcus Amand (KR / IAME / LeCont), on the podium and fastest of the OK Final at Wackersdorf! (Wackersdorf, 13 September 2020. FIA Karting European Championship, © 2020, Alexandros Vernardis / The RaceBox.)

Marcus Amand delivered one of the most eye-catching performances of the closing round of the FIA Karting European Championship, last weekend in Germany! At ease on the Bavarian track, the young French-Finn was again amongst the fastest senior drivers and fought hard for victory in Sunday’s Final, where he was rewarded with his first podium in the OK class! “It’s fully deserved,” VDK Racing’s Team Manager Eric Verdaasdonk comments. “Marcus was among the best in all the heats and was, undoubtedly, the most consistent in the Final with such an impressive speed and the best lap. After some bad luck in Zuera and Sarno, he nailed it this weekend!”

The fastest in his second free practice, Amand posted the third-best lap of his qualifying group and collected three Top 3-finishes out of four heats. Qualified on the outside of the grid’s second row for the Final, he fell down to eighth in the opening lap but quickly bounced back. Driving faster than the leaders with impressive consistency, he kept pressuring his rivals until the finish line, crossed in fourth position. He was then promoted to third and could spread the champagne of his first podium in OK class! His performance not only confirmed the top-quality of the KR/IAME material prepared by VDK Racing but also reinforced his status of favorite ahead of the World Championship!

For his second Junior weekend with the team, Ariel Elkin confirmed his progress of Sarno, consistently competing within the Top Five in Qualifying and the heats. Despite a good start in the Final, he lost a few positions in the opening laps but kept his head down and started recovering places up to 14th, his best result at this level! Alessandro Giusti did not disappoint either for his comeback with VDK. Relegated to the grid’s back end due to a problem in practice, he put his determination to good use, recovering 46 places in five heats! However, his pace was not rewarded by a place in the Final.

Wackersdorf’s results are more mixed for Antonio Leite and Augustin Bernier whose weekend has been far from easy. Both still never gave up and pulled off some good results in their last heats. “Beyond the numbers, we are very satisfied with our Juniors,” Eric Verdaasdonk explains. “We managed to find some good performances in each of them and they all worked very well. Ariel proved that a successful weekend often depends on a good qualifying lap. Alessandro came back on his feet, and could have reached the Final if it was not for his early issue, while both Antonio and Augustin ticked some good boxes this weekend. They just missed a bit of success in some circumstances, but the overall feedback is positive.”

Sam Balota was making his debut as an OK driver in Germany. While raw result was not the primary factor, the Belgian hopeful showed good progress on track, working tirelessly to improve his performance. “The future looks very good for Sam,” Eric Verdaasdonk confirms. “He made a lot of progress throughout the weekend. In the heats, his pace was around two tenths from the leaders’. He always wanted more but I am very satisfied with his progress, especially since nothing is easy at this level of competition.”

VDK Racing is already looking forward to its next objective: the FIA Karting World Championship – OK/Junior at the Kartódromo Internacional do Algarve in Portimao, from November 6th to 8th. The team will keep preparing for this event in the second round of Champions of the Future, held on the same track from October 29th to November 1st.