The second half of the Superkarts! USA Pro Tour is underway with the fourth round of the championship program contested on Sunday. The 10th edition of the SKUSA SpringNationals completed at the Utah Motorsports Campus in Erda, Utah, closing out the weekend with an exciting finish. Wind was a factor throughout the day and a threat of rain held off until the final checkered flag, with the heavy conditions passing south of the Salt Lake City area. A handful of drivers were able to repeat their victories on Saturday, solidifying their foothold in the title chase as the program looks toward the SummerNationals later this year. 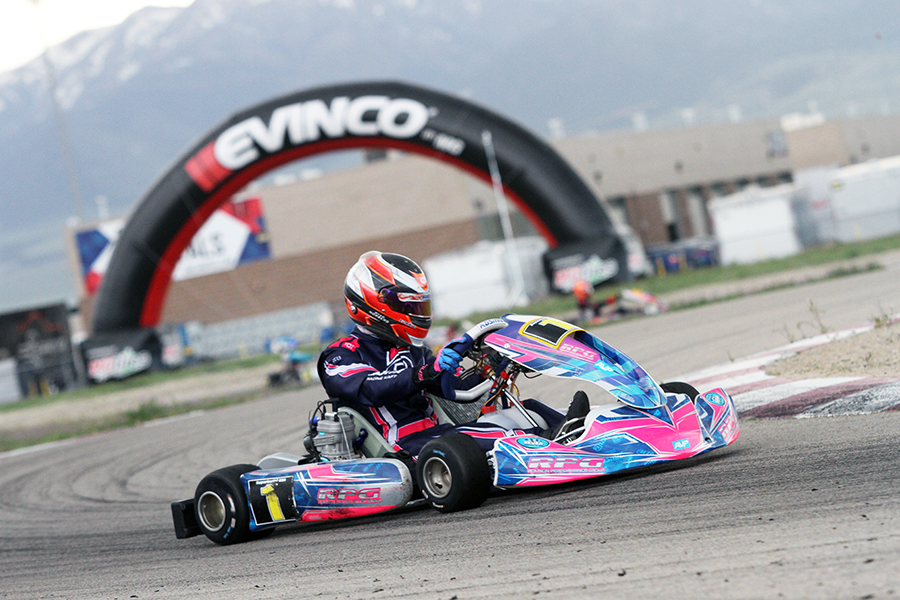 Among the repeat winners was three-time defending X30 Senior champion Ryan Norberg. The Rolison Performance Group / Kosmic driver swept the action once again to put himself back into the championship hunt. Norberg was challenged in the Prefinal by Canadian Thomas Nepveu (PSL / Birel ART), but came out with the win. It was a wire-to-wire performance in the 25-lap Final, as he stretched out to a 2.2-second advantage. Nepveu followed in second until he would be shuffled back to fifth by the end of the race. RPG driver Hannah Greenemeier put herself into second but would lose the position to 2014 SKUSA Pro Tour champion Jake Craig (RPM / Tony Kart). It was his first podium of the 2019 season, while Greenemeier earned her first career SKUSA podium. Brandon Jarsocrak (MDR / Tony Kart) started second and was shuffled down outside the top-10. With one of the quickest karts on the track, Jarsocrak drove his way back up to fourth.

The first three rounds of the Pro Shifter division saw three different winners. Round Four welcomed back Andrew Bujdoso to the top of the podium. The Mad Old Nut Racing / Croc Promotion driver earned his second victory of the season. Starting third, Bujdoso grabbed the holeshot but lost the lead two laps into Saturday winner Mathias Ramirez (PSL / Birel ART). Bujdoso fell down to fourth but marched his way back to the point. From there, he drove away to a 1.7-second advantage for his second victory of 2019. Ramirez earned his second podium of the season with the runner-up spot. The fight for third went down to the wire. Prefinal winner Kyle Wick (CRG Nordam) bogged again at the start but put himself into third much of the race. After fighting off teammate and defending S1 champion AJ Myers, it was a charging Joey Wimsett that became the late challenger. Wimsett suffered a rib injury in qualifying and sat out the Prefinal, starting 18th in the combined grid. As one of the quickest karts on the track, Wimsett took advantage of the fighting for position to close in late. Receiving the white flag, Wimsett moved inside Wick at turn one. Wick tried the over-under on the exit but spun as Wimsett shut the door. His engine stalled and ended on the sideline, recording a DNF. Wimsett scored the podium finish with Jake French (MONR / Croc Promotion) posting the fast lap of the race in fourth and Myers dropping to fifth.

The Pro Shifter 2 category ended nearly similar to that of Sunday from CalSpeed. Saturday winner Race Liberante (J3 / CompKart) was leading the main event, trailing the Pro 1 drivers. With five laps remaining, the throttle system failed on Liberante’s engine, forcing him to pull in. This handed the lead and the victory over to Mark Snyder (Formula K) with brother Liam Snyder (Formula K) crossing behind in second. Liam, however, was penalized 10 seconds for passing under yellow. That promoted Max Hewitt (CRG Nordam) to second with Anthony Freese moving to third.

The perfect season for G1 Gladiator driver Jordon Musser (PSL / Birel ART) was ended at the start of Sunday. Utah driver Ryan Pool (MSquared / Kosmic) set fast time in qualifying, marking the first session Musser had not finished P1 for the 2019 season – including the SKUSA Winter Series. Musser returned to the front, winning the Prefinal and leading all 20 laps of the Final. The three-time SKUSA champion was pressured by Pool early before John Crow (MRC / Aluminos) made a late charge with fast laps of the race. Crow attempted a move for the lead on the final lap heading into turn 11. The two made slight contact, enough to send Crow offline and allowing Pool to slip past. Musser continued on for the victory, keeping that streak going at eight main events in eight races for 2019. Pool and Crow completed the podium with Justin Peck (RPG / Kosmic) and Dan Monteiro (RPG / Tony Kart) completing the top-five. Brett Harrelson (Nash / CRG) scored the victory in S4 over Ken Schilling (Aluminos) and Miguel Garcia (SodiKart).

Matt Johnson (Nash / FA Kart) landed a perfect score on the weekend, sweeping Round Four. Johnson went wire-to-wire on the entire day, never giving up the top spot. It was highlighted by an eight-second advantage in the Final. Jess Peterson (PGR / Ricciardo) put on a show, coming from the tail off the field in the Prefinal to end up third. He improved one more spot in the Final for the runner-up finish. Round One winner Vatche Tatikian (PGR / Ricciardo) made a late charge and nearly took the spot away from Peterson on the final lap. He dropped Derek Wang (Crosslink / Exprit) off the podium for the first time in 2019 with Tim Meyer (RPG / Kosmic) in fifth. Jon Persing (Nash / FA Kart) added another victory, holding off Steve Martin (2Wild / Tony Kart) in the end with Utah driver John Ruess (Kosmic) completing the podium.

The X30 Junior main event was cut short due to a red flag, called after 14 laps were completed. At the time, Saturday winner Freddie Slater (Supertune / Tony Kart) was at the lead, and named winner. Jason Leung (RPG / Kosmic) was second, suffering a pushback bumper penalty to drop him down to 11th in the order. Josh Pierson (RPG / Kosmic) led early but was classified in second with Ignacio Montenegro (Nash / FA Kart) up 14 spots to complete the podium. Round One winner Dale Curran (Nash / Kosmic) was fourth with Round Two winner Branyon Tiner (RPG / Kosmic) fifth.

Utah drivers won both main events in the KA100 Senior division. Sunday was Walker Hess’ turn. The Tony Kart driver grabbed the Prefinal win and led all 20 laps of the Final to record his first SKUSA Pro Tour victory, making it four different drivers in the four rounds. Blake Hunt (KSNA / Tony Kart) posted the fast lap of the race, placing second for two podium finishes on the weekend. Saturday winner Joshua Fine (Kosmic) completed the podium with Christopher Martin (Crosslink / Exprit) up five spots to fourth and Nick Ramirez (PGR / Ricciardo) in fifth. Top qualifier Austin Osborne (IRM / Kosmic) was fighting for the podium until a flat tire took him out of competition.

Brent Crews (KSNA / Kart Republic) was one of the double winners on the weekend, charging his way forward Sunday in KA100 Junior. Crews started sixth after contact while fighting for the lead in the Prefinal put him down. It took him just six laps to reclaim the top spot and then drove away to a 2.3-second advantage for his second victory of the weekend. Connor Zilisch (LAK / Tony Kart) won the battle for second with Diego LaRoque (Ruthless / Tony Kart) placing third. Prefinal winner Kyffin Simpson (SCR / Tony Kart) ended up fourth with WinterNationals double winner Ethan Ho (APM / Tony Kart) in fifth.

Trouble struck for those running up front in the Mini Swift on Sunday. Kai Sorensen (Supertune / Tony Kart) set fast time in qualifying but his engine died on the pace lap of the Prefinal due to electrical issues. Caleb Gafrarar (PSL / Birel ART) stepped up and grabbed the Prefinal win over Christian Miles (KSNA / Kart Republic). Gafrarar led the opening lap but engine issues dropped him off the pace and well out of contention. That left Miles to battle with Enzo Deligny (Supertune / Tony Kart). On the final circuit, the two swapped the lead a few times with Deligny working inside of Miles in the final corner, winning the drag race to the checkered flag for his first SKUSA Pro Tour victory. Miles settled for second with Parker DeLong (Nitro Kart) winning the fight for third over teammate and WinterNationals double winner Sebastian Ng. Michael Costello (Benik) completed the top-five.

Jack Iliffe (Tony Kart) went unchallenged in the Final to grab his second victory of the weekend. Logan Chambers (Ricciardo) and James Moss (Tony Kart) were on his bumper early, until they both spun in the ‘box’ section of the track. That allowed Iliffe to drive away to a 1.9-second advantage. Graham Trammell (Kosmic), who recorded a DNF in the Prefinal, climbed 10 spots to steal second from Alfie Slater (Tony Kart), grabbing his first SKUSA Pro Tour podium. Ethan Thomason (Exprit) placed fourth with Truly Adams (Benik) in fifth.