The third round of the 2019 Superkarts! USA Pro Tour took place Saturday at the Utah Motorsports Campus facility in Erda, Utah with the first day of competition at the 10th edition of the SpringNationals. Clear skies all day roughly 30 minutes west of downtown Salt Lake City after a cold and windy start. The wind died down and the temperatures reached the 70-degree mark, providing perfect racing conditions. Three was the magic number with a majority of the categories welcoming a third different winner on the season. 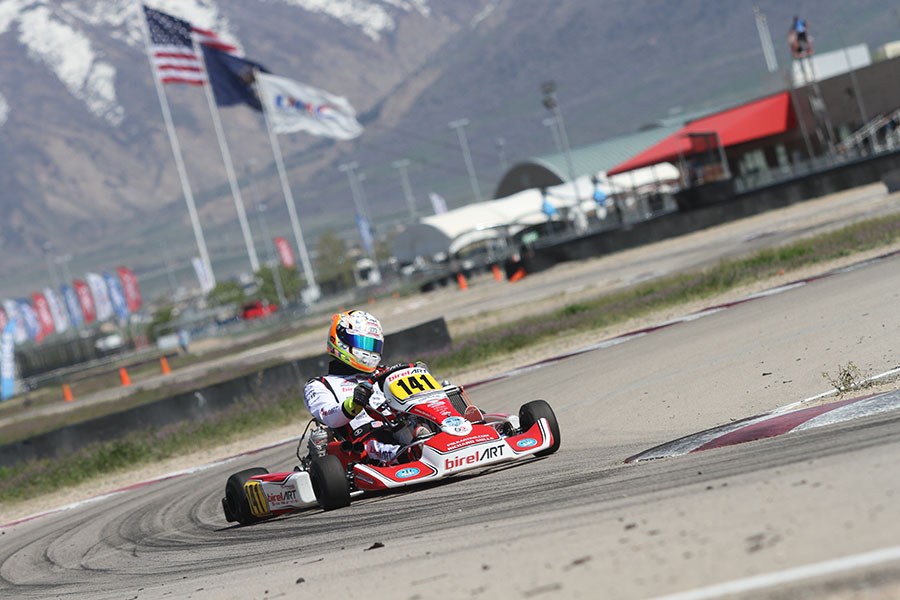 Mathias Ramirez (PSL / Birel ART) became the third different winner on the year in the Pro Shifter division. Ramirez began the day third in qualifying and finished second in the Prefinal, both sessions behind CRG Nordam driver Kyle Wick. The SKUSA #2 plate-holder set fast time (55.341) and drove to the win in the Prefinal. A bog off the line in the Final dropped him down to 10th after the opening lap with three-time SuperNationals winner Billy Musgrave (MRC / Aluminos) jumping out into the lead. Musgrave had an issue on lap seven in turn one, driving off the track and dropping back to eighth. This handed the lead and the essentially the victory to Ramirez. Consistent laps by the Florida driver gave him a 6.6-second advantage, earning his first SKUSA victory since the 2016 SuperNationals when he won S2. 2018 SKUSA Pro Tour champion AJ Myers grabbed a podium finish in his CRG Nordam debut, placing second. He held off a charging Wick, who recovered to finish on the podium. Round One winner Andrew Bujdoso (MONR / Croc Promotion) was fourth with new teammate Jake French coming up from the tail of the race group to fifth after contact in the Prefinal took him out on the final lap. French stole the 10 points for the fast lap of the race.

Three-time defending X30 Senior champion Ryan Norberg (RPG / Kosmic) grabbed maximum points on the day with a sweep of the action. Norberg set fast time in qualifying, won the Prefinal and led wire-to-wire in the Final for his first victory of the season, becoming the third different winner on the year. Brandon Jarsocrak (MDR / Tony Kart) started second, but fell to fourth at the start. He worked up to second quickly, however, Norberg had established a solid lead and was unable to run down the champion. The fight behind him was for third with Trey Brown (Nash / FA Kart) holding off a charging Colin Neal (RPG / Kosmic) for the podium spot. For Neal, it was his best SKUSA Pro Tour finish of his career. Canadian Thomas Nepveu (PSL / Birel ART) completed the top-five after starting third.

Race Liberante (J3 / CompKart) doubled up his win total on the year in Pro Shifter 2, sweeping the day. After setting fast time for the class in qualifying, Liberante became the winner in the Prefinal after Max Hewitt (CRG) made contact with Pro 1 driver on the final circuit. Liberante took advantage in the Final, leading all 25 laps in class while racing among the top-10 in Pro 1. Connor Robles (MRC / Aluminos) scored his first Pro Tour podium, as the S5 graduate earned the second spot ahead of Calvin Ming (MRC / Aluminos). Hewitt drove to fourth with Graig Alvarez Jr. (CRG) in fifth.

The perfect score for 2019 continued for Jordon Musser in the G1 Gladiator division. Musser swept the action on the day in Utah, however, it was no easy task. The pressure was kept on by local driver and 2012 SKUSA Pro Tour winner Ryan Pool (MSquared / Kosmic) and last year’s S4 Super Master champion John Crow (MRC / Aluminos). Both kept pace with Musser in the Prefinal and much of the Final before Musser pulled away to secure a seventh victory on the season, including SKUSA Winter Series. Crow worked past Pool for the second spot late in the race to complete the podium. Justin Peck (RPG / Kosmic) was fourth with Dan Monteiro (RPG / Tony Kart) fifth. Ken Schilling (Aluminos) took advantage of issues for Brett Harrelson (Nash / CRG) on the final lap to grab the S4 Master Stock Moto victory. Miguel Garcia (SodiKart) complete the podium.

British driver Freddie Slater (Supertune / Tony Kart) became the third different winner in the X30 Junior division. Slater swept the action on the day, however, challenged every lap. Slater was able to get away with Kyffin Simpson (SCR / Tony Kart) and Dale Curran (Nash / Kosmic). Slater led the final three circuits, holding off Curran and Simpson at the line. Simpson was penalized five seconds for contact, dropping him to sixth in the order and putting John Burke (Supertune / Tony Kart) on the podium in third. Rolison Performance Group / Kosmic teammates Jason Leung and Josh Pierson completed the top-five.

A last lap pass secured the first SKUSA Pro Tour victory for Utah driver Joshua Fine (Kosmic). After some hard racing early on in the Final, Blake Hunt (KSNA / Tony Kart) and Fine were able to break away from Austin Osborne (IRM / Kosmic). Hunt led as the white flag waved, and went on the defensive. Coming out of turn 11, they two were side by side with Fine pulling off the over under in the double apex turn 12. Hunt drifted out wide enough for Fine to slip inside and grab the top spot, reaching the checkered flag first to become the third different winner on the season. Hunt settled for second with Osborne third, recovering from no time in qualifying after a mechanical issue. Christopher Martin (Crosslink / Exprit) moved up three spots to fourth with Nick Ramirez (PGR / Ricciardo) up seven spots to fifth, recovering from a spin in the Prefinal.

Brent Crews (KSNA / Kart Republic) did not contest the KA100 Junior class at the WinterNationals. He made up for it, recording a sweep on the day for his first SKUSA Pro Tour victory at the Junior level. Crews set fast time in qualifying, won the Prefinal, and was able to secure the victory on the final circuit. He and Cole Morgan (TF / Tony Kart) pulled away in the second half of the race. Morgan led on the final lap, until Crews pulled the trigger heading into turn one. Morgan tried a switch on the exit, coming up short and losing momentum. That allowed Crews to run to the checkered flag unchallenged for the victory. Caleb Shrader (RPG / Kosmic) won the battle for third over Kyffin Simpson (SCR / Tony Kart) with Maximilian Opalski (RPM / Tony Kart) in fifth.

The Mini Swift Final was cut short to 13 laps after a red flag for John Antonino (Tony Kart). The race was restarted and Kai Sorensen (Tony Kart) took advantage. He was able to get away and score his first victory of the season at the SKUSA Pro Tour. Anderson Leonard (Tony Kart) was a close second. The fight was for third as Christian Miles (Kart Republic) won the spot over Jack Jeffers (Tony Kart) and Cooper Shipman (Tony Kart).