After stops in Adria and Kristianstad, the Rotax MAX Challenge Euro Trophy traveled to Wackersdorf, Germany, for its Final Round from September 6th to 8th where the Rotax elite was challenged by changeable weather conditions throughout the weekend in the modern facility of the Prokart Raceland. 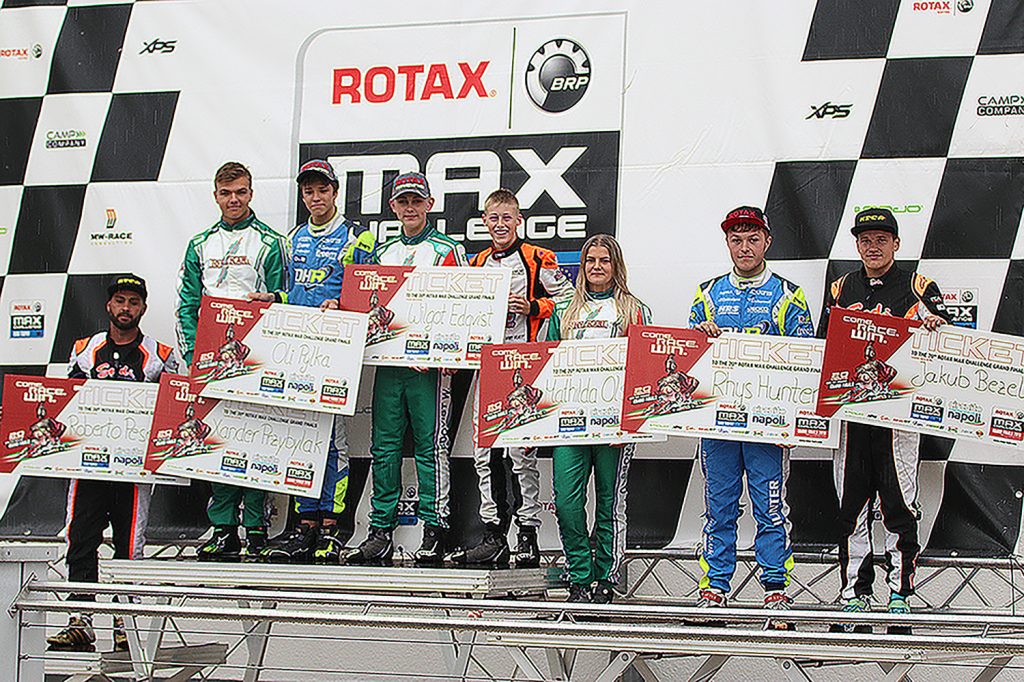 Yet the 1,190-metre long circuit in Bavaria kept dry most of the time and once again proved to be the perfect soil for exciting and action-packed racing, which in the end did not only ascertain some new winners but four worthy title claimers and seven delegates for the RMC Grand Finals in Sarno!

Oli Pylka (Dan Holland Racing, see below) was the driver of the weekend in the field of the juniors. On a wet track in qualifying, the pole was more than one second faster than his opponents. This dominance continued in the heats, which the youngster won both, thus conquering the pole position for the final day. And even then the FA pilot was unbeatable: Although the races were no walkover for him, the talent from Poland ultimately took both wins and the day’s victory, which even boosted him onto the second place of the championship.

Championship leader Mike van Vugt (JJ Racing) meanwhile showed tactical strength in Wackersdorf. The Dutchman did not risk too much and finished second in both finals, successfully defending the championship title. Local hero Moritz Schmeiss (JJ Racing) had reason to cheer, too. On home soil, the German drove finished third in both finals and took this position on the podium of the day’s classification.

Seniors: Mathilda Olsson celebrates her third win of the season

In the Seniors category, the biggest grid of the Rotax MAX Challenge Euro Trophy, the overall victory had been settled during the half-time race in Sweden. Mathilda Olsson (Strawberry Racing, below) had already secured the necessary points at her home game. Accordingly, the fast Swede was without pressure at Wackersdorf. But it was only on Saturday when she did not play a leading role. At this early stage of the event, the Brits Jason Lockwood (KR Sport) as the fastest man in qualifying and Rhys Hunter (Dan Holland Racing) as leader after the heats, set the pace.

On Sunday, Mathilda Olsson struck back. In an extremely thrilling first race, in which up to twelve pilots fought for the victory, the Scandinavian prevailed with excellent performance and crossed the finish line in front of Rhys Hunter and Lewis Gilbert (Persistence Motorsport). In the second race the decision was close, too: But this time Lewis Gilbert made the race. By just two-tenths of a second, he pushed Mathilda Olsson and Rhys Hunter into the chasing positions. Yet, Mathilda Olsson scored the most points for the day’s classification, which is why the champion celebrated her third win in 2019. Lewis Gilbert finished second to Rhys Hunter, who eventually secured the runner-up title.

The DD2 started with a dramatic decision at the very beginning of the weekend: after the Qualifying session, a technical non-conformity was found on the kart of championship leader Petr Bezel (KSCA Sodi Austria Team, which lead to disqualification. As this was not the first time that the Czech stood out in this regard, he was excluded from the event, which made him he lose all chances for the title. His brother Jakub Bezel (KSCA Sodi Austria Team), who belonged to the circle of the title favourites, too, had a similar experience, being disqualified due to a technical violation, but contrary to his brother, he was allowed to participate in the event. Thus Xander Przybylak (Bouvin Power) was in the spotlight. The Belgian suddenly had the best opportunity to win the championship title. And indeed he did not leave anything to chance. The Belgian drove the best time in qualifying and defended the first place after the heats. Starting from pole position in the first final, there was no stopping for the Tony Kart pilot.

He celebrated a start-finish victory ahead of Sweden’s David Rehme (Dan Holland Racing) and Austria’s Manuel Tenschert (KSB Racing). At that time Xander Przybylak’s title win was almost clear, but the second race should turn the tide. This time, Christian Sorensen (Dino) left his mark on the second final. The Dane took the final win and celebrated the victory in the day’s classification with a strong performance. However, his performance got a little bit lost due to the championship’s decision, which was settled behind him: Jakub Bezel fought bravely with strong nerves and secured the second place ahead of Manuel Tenschert. Since Xander Przybylak equally dropped back to fifth place, the championship was decided: With a leading gap of only four points, Jakub Bezel was crowned 2019 champion, while Xander Przybylak had to be satisfied with the runner-up title.

There were no surprises in the field of the DD2 Masters: Leader Robert Pesevski (KSCA Sodi Austria Team, below) won both races clearly and prevailed not only in the day’s classification but the 2019 championship. The day’s podium was completed by the Belgian Christophe Adams (Team La Putrel) and the Pole Slawomir Muranski (46 Team). In the overall standings, Christophe Adams also finished second ahead of the German Michael Becker (RS Competition).

“We are extremely happy with the 2019 season. We have seen another increase in the number of participants and experienced three exciting championship rounds. The very first RMC Euro Trophy Open held in Genk, in spring, was an absolute success, too. We are already working hard on the preparations for 2020, which will see some news – for example, the introduction of the Micro class, which will take part in three of our four events”, summarizes series organizer Mike Wagner (Camp Company GmbH).

The dates and locations for the third season of the Rotax MAX Challenge Euro Trophy are set: the season opener will take place from 10th to 12th April 2020 in Genk. For the second round, one will visit Adria from 29th to 31st May 2020, before the PF International Circuit in the UK will be the new venue from 10th to 12th July 2020. The Final will traditionally take place from 4th to 6th September 2020 in Wackersdorf.