The third and final round of the 2020 ROK Cup USA Florida Winter Tour gave its verdict, last Sunday on the temporary circuit located on the Tropicana Field of St. Petersburg, Florida. Drivers and teams enjoyed a dry track during the event’s final races for each of the 11 classes. 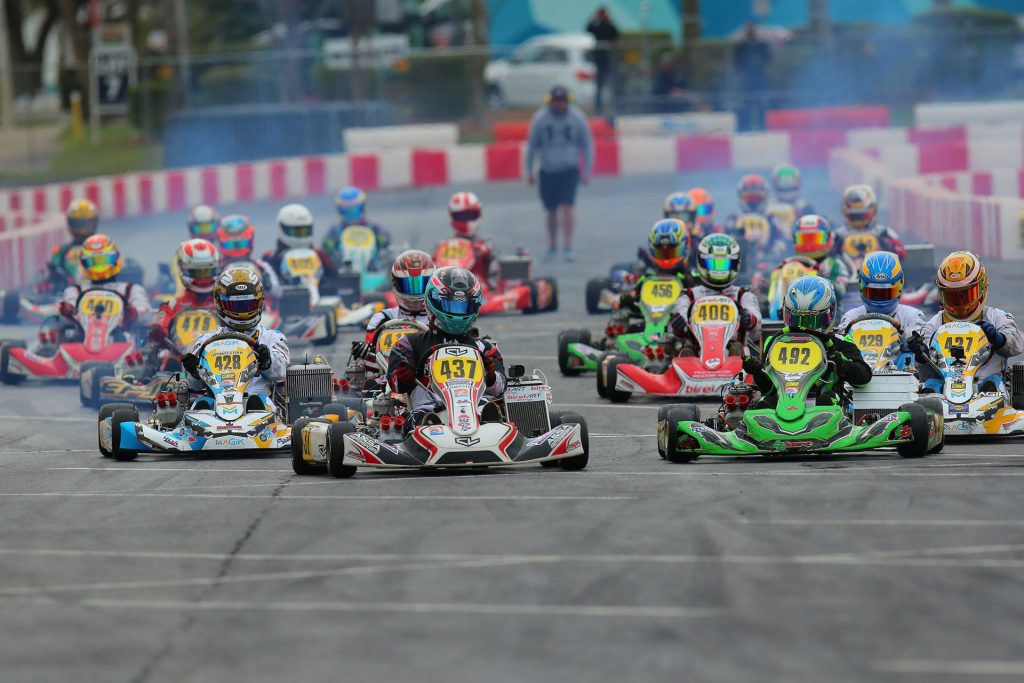 Granger Perra (Private) scored the round three victory in the 206 Junior class as he took the checkered flag in the 18-lap main event. Chased by a trio of Canadians, Mathieu Cousineau (Montreal Karting Club) would cross the line in P2 as he kept Perra true to himself over the course of the main event. Laurent Legault (PSL Karting) finished just over ten seconds in arrears of Perra to stand on the podium in P3 while Logan Ferguson (Prime Power Team) claimed the fourth position. Running in the top-five all weekend long, Julian DaCosta (Haase USA) claimed the fifth position.

It was Michael Auriemma (Orsolon Racing) who led from green to checkered in the Master ROK main event by a healthy margin of 6.231 over Canadian driver Sylvain Coulombe (Premier Karting). Glauber Granero (VMotorsports) secured the third and final step of the podium while Renato Jader-David, your 2020 Master ROK Champion, failed to finish but had enough points in the bag to secure the title.

Dylan Amundsen (DP Racing) was on a mission on Sunday morning as he took control of the 206 Senior -Final and never looked back. Scoring the second-fastest lap of the race, Amundsen drove his MGM Kart to the victory by .408 over the BirelART of Gerald Caseley (Gerald Caseley Racing). Caseley scored the fastest lap of the main as he held on to second ahead of Colin Warren (VLR/TS Racing). Owyn Thomas (Prime Power Team) gained two positions in the Final to garner a fourth-place finish while Alexander Searle (MGM) finished fifth to complete his 2020 Florida Winter Tour.

Taking the win by 5.9 seconds on track, Oliver Wheldon (JC Karting) was the victim of a start-line infraction penalty following the final checkered flag. Taking the win, but not the championship from his grasps, Wheldon was crowned the 2020 Micro ROK Florida Winter Tour Champion. Salvador Dellavecchia (AM Engines) was awarded the victory over Jordan DiLeo (Goodwood Kartways) who gained seven positions in the main event. Wheldon slotted into third with Kai Johnson (AKT) in fourth and Victor De-Alencar (U-Race), who also gained seven positions in the main event.

Rocketing from third place on the grid up to the front, Andrew Bujdoso (Checkered Motorsports) outpaced Daniel Formal (ANSA Motorsports) for the ROK Shifter main event win. Formal, despite battling hurt ribs, soldiered on to finish second ahead of AJ Myers (Checkered Motorsports), who claimed the championship. Jake French (PSL Karting) had a solid drive forward gaining three positions in the main event to finish fourth while Prefinal winner Austin Garrison (TB Kart USA) was shuffled from his front-row starting spot back to finish fifth.

Connor Zilisch (Late Apex Karting) made it three for three in 100cc Junior events as he once again topped the podium blocks in both round three and the championship. Putting up a hard-fought battle, Thomas Annunziata (Team Felon) finished a scant .302 behind Zilisch but 1.239 ahead of Chloe Chambers (Mike Doty Racing) as the trio were the class of the field all weekend long. Westin Workman (Timmy Tech) closed his 2020 Florida Winter Tour with a fourth-place effort with the top-four remaining unchanged between the Prefinal and main event. Beckham Jacir (JC Karting) rounded out the top-five after gaining two positions in the final on-track session.

Matching the results sheet of Zilisch in the 100cc Junior ranks, Julia Boos (Team Felon) went three for three in Senior 100cc to secure her first Florida Winter Tour championship. Justin White (Kartworkz) and Jenson Altzman (Ruthless Karting) made it a close battle with the top-three finishing within .598 of one another at the final checkered flag. Bill McBrayer (Energy Corse) and Andy Miller (Goodwood Kartways) managed to hang on for fourth and fifth on the day.

It was the Caleb Grafarar (PSL Karting) show in the Vortex Mini ROK main event as he stretched his lead early and maintained the gap for the entire 18 lap-Final. Taking the race win and the championship, the BirelART driver scored two victories at the 2020 Florida Winter Tour. Christian Quijano (Supertune) had one of his best events of the season with an impressive second-place finish while Parker Delong (Syntech) was able to garner the third and final step of the podium. Matias Orjuela (Parolin) was able to maintain his position in the top-five finishing fourth as Diego Ardiles (Supertune) finished fifth and closed his Florida Winter Tour with momentum towards the remainder of the 2020 season.

It was Diego Ramos who secured the ROK Senior round three win and accompanying championship trophy as he was able to hold off the advances of Luca Mars over the 26 lap-main event. Stretching a healthy gap on the rest of the field, Ramos led early while Mars took the top spot on lap three. Ramos was able to grab the lead back on lap thirteen and drive on to take the win by 1.107 as he laid down a flyer on the final circuit while Mars slipped through turns three and four. Colin Warren (TB Kart USA) was on the podium with an impressive drive to third while Cole Morgan (Supertune) did the same to fourth. Brandon Jarosocrak turned one of the fastest laps of the race to come home fifth.

Connor Zilisch (Late Apex Karting) was back on the top step of the podium for the second time during round three as he dominated the ROK Junior event. Alex Powell (AKT) was the best of the rest finishing in second while Chloe Chambers (Mike Doty Racing) added her first podium, but second top-five of the day. Jace Park (Speed Concepts Racing) and Jack Jeffers (Speed Concepts Racing) battled hard to finish in the top-five and close their Florida Winter Tour campaigns strong.

With two wins to his credit at the 2020 Florida Winter Tour, Jordan Musser (PSL Karting) could not hold back Josh Lane (DRT) in the third and final round. Lane would go on to score the win by 1.372 as Musser crossed the stripe in second to secure the Shifter Master ROK title. Rene Martinelli (TB Kart USA) scored his third podium result in as many races with Hernando Sanchez (Goodwood Kartways) coming home in fourth. Daniel Dibos (JC Karting) had a consistent weekend crossed the stripe in P5.