In a few days, the second foreign round of the German Kart Championship will take place on the international Karting track of Genk, in Belgium, for the eighth time. Decisions regarding the fights for the titles could be expected. 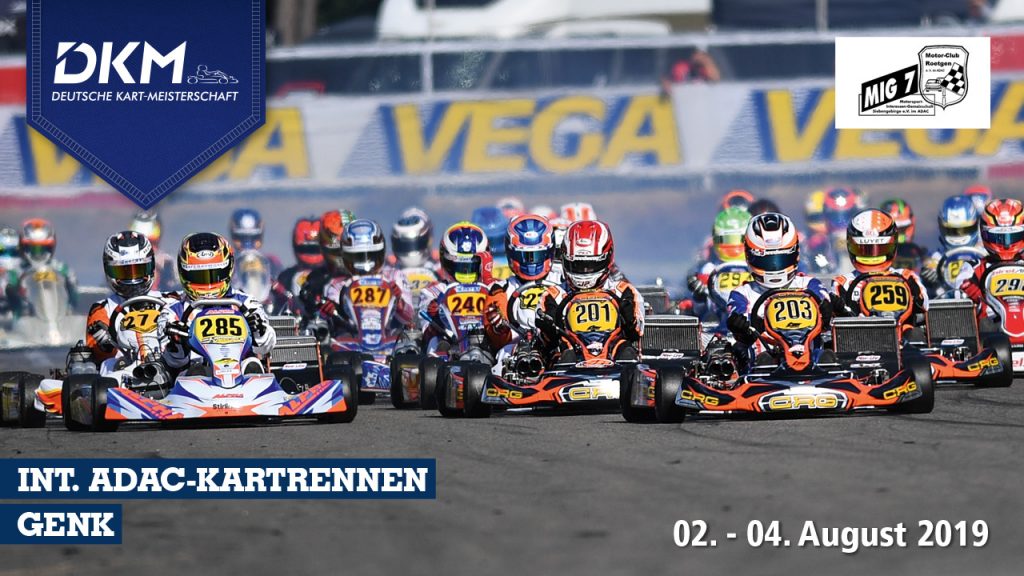 The 2019 season is progressing rapidly. After the kick-off in mid-April at Lonato, followed by competitions in Wackersdorf and Kerpen, the fourth event of the season is heading for Belgium’s Genk this weekend. After the debut in 2011, the DKM and its five grade series are going to travel to the 1.360m long track in the border region to the Netherlands and Germany for the eighth time. The fields are going to be brilliantly manned once again in the five classes – DKM, DJKM, DSKM, DSKC, and DEKM – with 163 drivers from all over the world represented.

While there were a few surprises at the half-time race, the first decision in a fight for the title could already be made in Genk. In the German Junior Championship (DJKM), the Dutchman Robert de Haan (Energy Corse) showed a dominant performance so far, achieving five out of six possible race victories. Therefore, he already has an advantage of 83 points on his main pursuer Jakob Bergmeister (Millennium Racing Team) from Germany. With further victories in Genk, De Haan would well lay his hands on the title.

In the other classes, things are as exciting as ever. Especially in the German Kart Championship (DKM), the drivers are really close together. Leading driver Hugo Sasse (TB Racing Team) and Harry Thompson (Ricky Flynn Motorsport) on fourth place are currently only 28 points apart. The new European Kart Champion Lorenzo Travisanutto (CV Performance Group) will also start in Genk after he couldn’t start in Kerpen due to an illness. Also among the four title favorites is Kas Haverkort (CRG Keijzer Racing) from the Netherlands, who is currently in second place.

There is going to be a duel in the German Shifterkart Championship (DSKM) where Stan Pex (SP Motorsport) is currently in the lead in front of reigning champion Fabian Federer (SRP Racing Team). The field of the DMSB Shifterkart Cup (DSKC) is quite balanced with Tim Tröger (Mach1 Motorsport), Senna Van Walstijn (SP Motorsport) and Davids Trefilovs (SRP Racing Team) having been three different winners in three races so far. The number of favorites is therefore quite high. In Genk, Van Walstijn is going to start as the leading driver in front of the German Valentino Fritsch (BirelART Racing KSW).

Luka Wlömer unstoppable in the DEKM?

It’s going to be the half-time event of the German Electric Kart Championship (DEKM) in Genk. The first two weekends were dominated by Berlin resident Luka Wlömer. He won three of the four races but the international field, with drivers from seven nations, presented itself as quite balanced with narrow decisions so far. Therefore, he can’t rest on his laurels.