Last weekend, the five DMSB grade series had their second foreign round in the International Karting Track of Genk in Belgium where 178 drivers created high tension regarding this year’s title fights. Right before the final event, all championship decisions are still to be made. 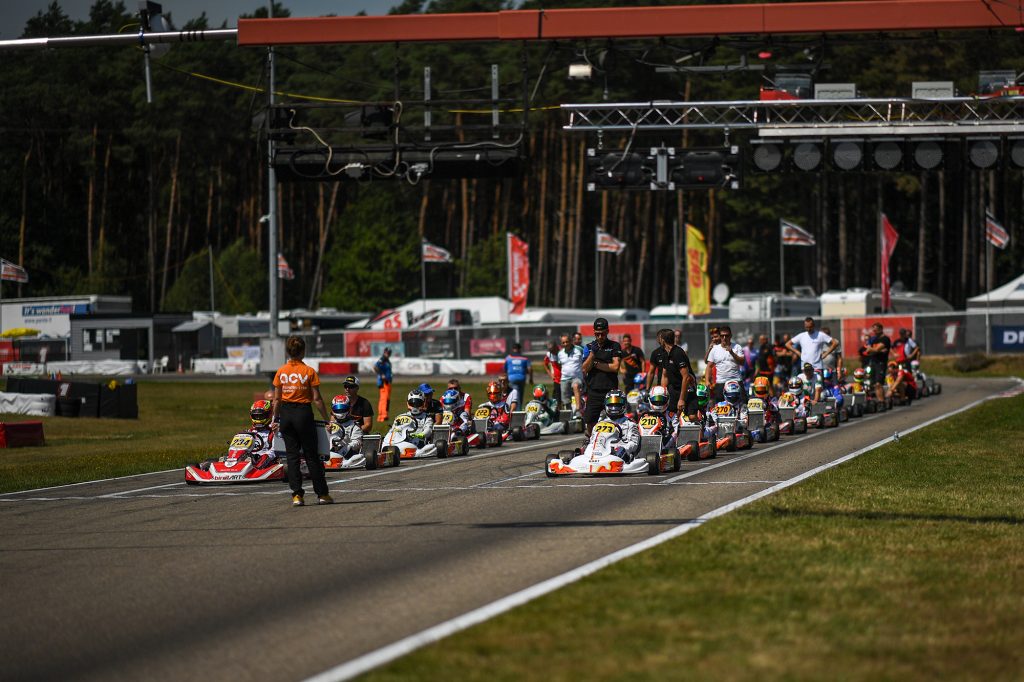 The German Kart Championship and its five grade series are entering the crucial phase of the season. In Belgian Genk, the first title decision at the juniors could have been made. There were a couple of surprises in the races in mostly great kart racing weather though. The winners of the final races were Hugo Sasse, Harry Thompson (both DKM), Christian Ho (DJKM), Riccardo Longhi, Stan Pex (DSKM) und David Trefilovs (DSKC). All championships are now still really exciting before the final event in Bavarian Ampfing.

New double winner in the DEKM

Jasin Ferati caused a changing of the guard in the German Electric Kart Championship. The Swiss showed an incredible performance on the 1.360m long track in Belgium and achieved victories in all DEKM races. Thereby he gained a lot of ground in the championship and is right behind overall leader Luka Wlömer.

The races of the German Kart Championship lived up to their high class. Saturday was dominated by Harry Thompson (Ricky Flynn Motorsport), but things already got exciting during the heats. Next to the Brit, German Ben Dörr (TB Racing Team) also drove at the forefront and made it to the first starting row.

Thompson and Dörr caught a difficult start at the first final race though and temporarily fell back to midfield. In the meantime, European Champion Lorenzo Travisanutto (CV Performance Group) took the lead and drove away from his pursuers. But overall leader Hugo Sasse (TB Racing Team) shortened the gap again and drove past Travisanutto shortly before the end of the race. At the finish line, the protégé of the ADAC Sports Foundation celebrated his second victory of the season. Behind the duo followed Felix Arnold (TB Racing Team), Alexander Tauscher (Junior Team75) and Luke Füngeling (Valier Motorsport).

Travisanutto was the best starting driver at the second final race as well and took the lead again. During the course of the race, the Italian had to fight against Sasse once more. The German found another gap and drove next to the reigning World Champion. He held his own though and they collided. While Sasse was able to continue driving after a 360-turn, Travisanutto had to drop out of the race. Thompson was the happy winner: He achieved his third racing victory and stayed in the race for the title. Sebastian Öggard (Ward Racing) and Kas Haverkoort (CRG Keijzer Racing) also ended up on the podium. Füngeling drove past Sasse during the last lap and came in fourth.

“The pace of the second race was great, I’ve gathered important points for the championship. Right now I’m not yet thinking about defending my title though. I’m going to give my best in Ampfing and then see where I’m at”, Thompson said cautiously. Sasse added a short while later: “It’s sad that I’ve missed the double victory. But my situation is still good and now I want to win the title in Ampfing.”

Championship ranking DKM after 8 of 10 races:

DJKM: Double victory brings Christian Ho back into the fight for the title

Singaporean Christian Ho (Ricky Flynn Motorsport) dominated the weekend at the juniors. He led the field during qualifying, both heats, and the final race. Thereby, he gained the maximum of points in Genk. He also got back into the fight for the title and is now looking forward excitedly to the final event: “This weekend couldn’t have gone any better. The team did a great job and we’re able to win races and are still in striking distance in the championship.”

Regarding the fight for the position of pursuer, things were a lot closer. Robert De Haan (Energy Corse) defended second place and thereby gathered further important points in the fight for the title – he is now going to start as the big title favorite in Ampfing. “I’ve lost too much time fighting with my opponents during the starting phases of both races and therefore wasn’t able to close the gap on Christian anymore”, the Dutchman summed up self-critically. On the further ranks followed Igor Cepil (CV Performance Group), Santiago Trisini (CV Performance Group) and German Jakob Bergmeister (Millennium Racing Team) in the first final race. The same drivers ended up among the top five in a changed order at the second race. Santiago came in third this time in front of Cepil and Bergmeister.

Championship ranking DJKM after 8 of 10 races:

Champion Fabian Federer (SRP Racing Team) started into the fourth race of the German Shifterkart Championship from pole position and thereby highlighted that he was still in it for the title. But an accident at the start during the last race forced him to take a break on Sunday. The South Tyrolean had to watch as Riccardo Longhi (BirelART Racing KSW) and Stan Pex (SP Motorsport) achieved the final victories.

Dutchman Jorrit Pex (SP Motorsport) won the start of the first final race. But Riccardo Longhi came closer from behind and already drove past the leading driver during the first half of the race. Even though the field stayed close together, there was no attack anymore and Longhi celebrated his second victory of the season. Behind him followed Martijn van Leeuwen (KR Motorsport) and Stan Pex (SP Motorsport). The latter received a spoiler penalty though and was only ranked fifth. His brother Jorrit inherited the last place on the podium in front of Emilien Denner (CPB Sport).

Kick-off winner Longhi wasn’t able to tie in with his performance during the second final race. He fell back early in the race and only came in seventh. Stan Pex dominated the fight for victory this time and thereby laid the foundation for winning the championship. “We had great speed and a good strategy during both races. It’s nice that Jorrit stood next to me on the podium in second place – this confirms our good work. I wish Fabian all the best, it was unfortunate that he wasn’t a part of today due to the accident”, the Dutchman summed up. Jorrit Pex caused a double success for the brothers in the end. Next to them, Denner, German Maximilian Paul (DR srl.) and van Leeuwen completed the cup ranks.

Championship ranking DSKM after 8 of 10 races:

Robert Kindervater (BirelART Racing KSW) was in top form during the heats and led the field. During the course of the pre-final, he fell back to ninth place though. The victories went to the two championship title favorites David Trefilovs (SRP Racing Team) and Senna van Walstijn (SP Motorsport). Both showed dominant performances in their races. The 17 respective best drivers of the two pre-finals then competed in the big final over 19 laps.

During this, the two fought for victory between them again. Five laps before the end of the race, Van Walstijn got ready to attack at the end of the start-finish straight. Instead of past Trefilovs, he slid off onto the meadow and had to get back into the field of pursuers. Valentino Fritsch (BirelART Racing KSW) profited from this and collected important points on second place and is now still leading the championship. Behind the driver from Upper Palatine followed Vyacheslav Putyatin (CPB Sports), Andre Walter (Kart Performance Racing) and Enrico Bernardotto (SRP Racing Team). Winner Trefilovs was happy about his victory at the finish line and is now looking forward excitedly to the final event: “It was a perfect weekend with two victories. A hard fight for the title now awaits us in Ampfing.”

Championship ranking DSKC after 8 of 10 races:

The German Kart Championship is now going to take another short break and is going to travel to Bavarian Ampfing from October 4th to 6th. The title decisions are then going to be made on the Schweppermannring.