This past weekend the CV Performance Group traveled to the Belgian Circuit of Genk for the German kart championship. With six drivers, the Kart Republic team rose to a challenge in the top-class race. Christian Voß’ fosterlings boasted in both OK categories. Despite bad luck for Lorenzo Travisanutto, the second Final is still about the title in the German kart championship. 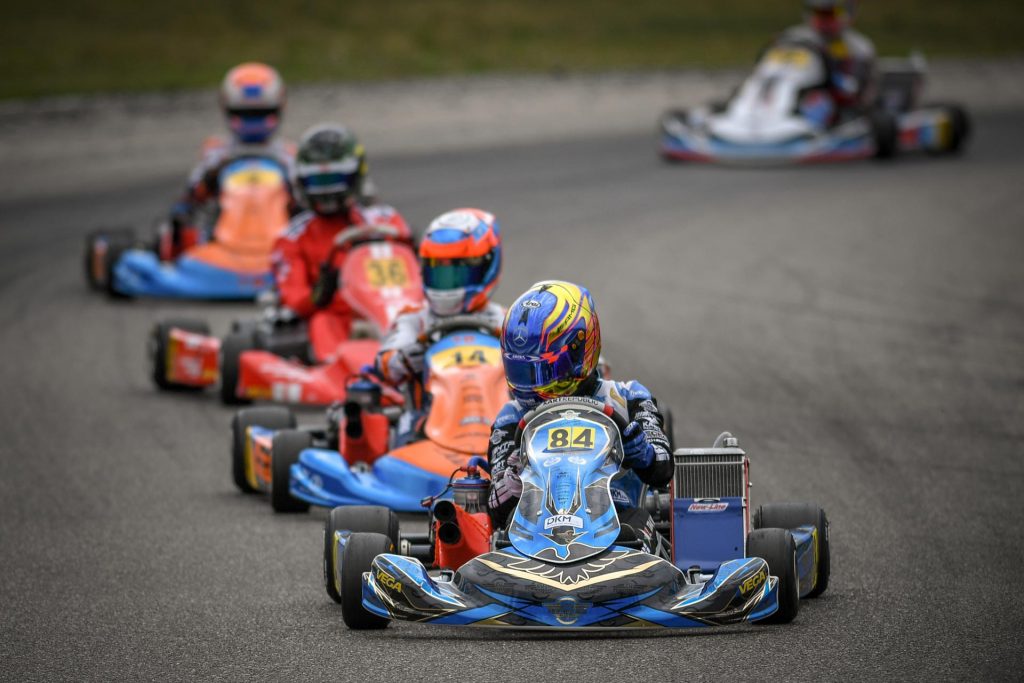 178 participants filled the entry-list last weekend and made for a suspenseful race action in Genk. On the international top racetrack, the drivers of the CV Performance Group started with big ambitions and lived up to them more than expected.

In the German Junior Kart Championship, Igor Cepil held up the CV colors. Already at the beginning of the weekend, the Czech driver underlined his possibilities in Qualifying coming in fourth place and didn’t get distracted from then on. In the heats, the youngster kept cool and converted his good starting place into place three and four in the Finals. The young driver then delivered a suspenseful duel with his team mate Santiago Trisini who also established himself in the top and saw the checkered flag in position four and three.

Levente Revesz proved also his strength. After flubbed heats, the Hungarian driver was placed 15th at the start to the ranked races, fought his way up and made it onto rank 13 in the first race and onto rank seven in the second run. As the fourth driver in the German junior kart championship quartet, Bruno del Pino Ventos got in on the first Final in a good middle field until the youngster had to register a deficiency in the second run.

Lorenzo Travisanutto went into the German Kart Championship as a definite favorite. The European champion of a few hours’ standing was placed eleventh in Qualifying which didn’t meet his expectations. In the heats, he fought his way up onto position three. In the first Final, the Italian driver was leading but had to be satisfied with rank two in the end. In the second run, a setback followed: in the fight for the victory, Lorenzo collided with an opponent and had to withdraw early from the race.

Kobe Pauwels gave everything in the Seniors class. With rank four in Qualifying, the KR driver set the first exclamation mark. A deficiency in the heats made for a bitter setback which woke the fighting spirit in the youngster. From rank 21, Kobe drove from lap to lap further to the top and scarcely missed the well-deserved trophy in the second final being placed sixth.

Head of the team Christian Voß came to a positive Genk conclusion: “The speed was more than fitting this weekend. Unfortunately, luck was not always on our site. After Lorenzo’s deficiency cause by illness in Kerpen, this time points would have been important. We still did not lose connection to the lead in the championship. At the final in Ampfing, we have to give everything.”

Already this upcoming weekend the CV team will continue to the racetrack. To prepare for the ADAC Kart Masters, the team starts at the ADAC Kart Cup on the Erftlandring in Kerpen.