“Fortune favors the brave”. An expression that could describe Alexander Albon’s up-and-down career as a racing driver. But the Anglo-Thai, aged 22, never backed down against difficulties and is about to fulfill a life-long goal by entering Formula 1 in 2019. 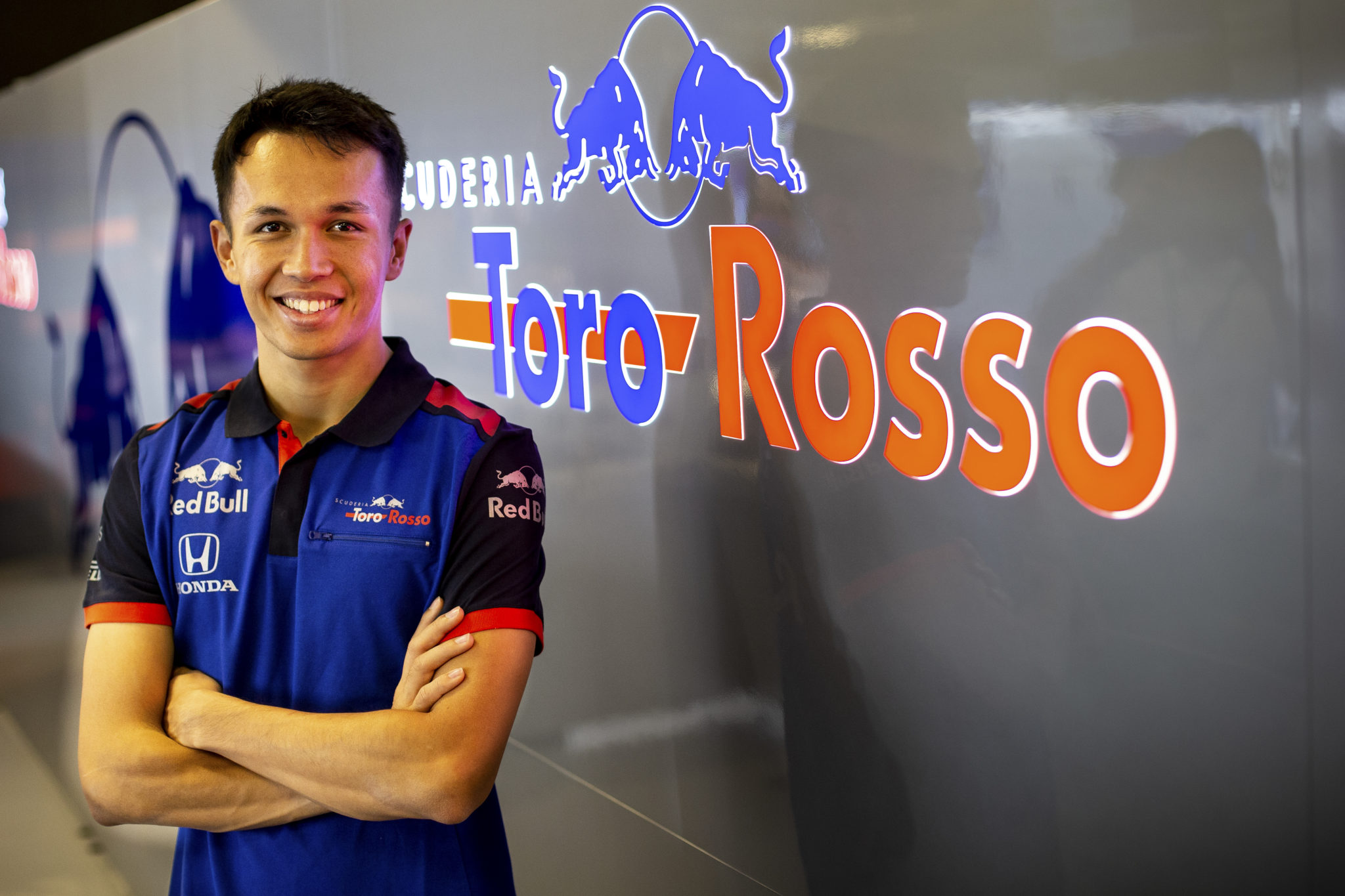 To write that Alexander, or Alex, Albon is a happy man would be to underestimate the young man’s real state of mind when we talked to him in the wake of the announcement, made in Abu Dhabi following the last F1 Grand Prix of the 2018 season, that he would fill the seat of the departing Brendon Hartley at Toro Rosso for the 2019 season.

“It’s such an amazing feeling to know that I’m in Formula 1,” says Albon. “I think I haven’t fully realized yet. Ever since I was five or six years old, becoming an F1 driver has always been my absolute goal and it kept following me all through my career. In the end, Toro Rosso was my only chance to be in F1 and it was the right time to take such a decision. Otherwise, I would not have had the budget to join another team or afford one more season in F2. This all happened as well thanks to some of the changes that allowed me to have this free space in the market.”

To better understand Albon’s feeling, one must know about the sense of relief that accompanied the news after weeks of speculations around the identity of the driver that would finally join the already-confirmed Daniil Kvyat in the Italian team.“There’s been quite a lot of stress these last months and the announcement came more like a relief”, he confirms.

If his name had been on the table for quite a while, planets took time to align for Albon as he had previously secured a three-year deal with Nissan to enter Formula E in season 5 (2018-2019). As the future didn’t look so bright once his F2 campaign would end, going full electric appeared to be the best option at the time.

“During this season [2018, ed.], I went through some doubts like ‘Am I doing a good enough job to get to F1?’, he remembers. “At that point, I didn’t have any contact with an F1 team. So, I kept my head down and we went ahead with Nissan in Formula E. But, then, the F1 opportunity came on the table. This is the kind of offer you have to take and, obviously, I’m very grateful to Nissan and e.dams for allowing me to pursue my dream. They both understood what I wanted and respected my passion. People could always say that signing for three years in Formula E was a safer choice than going to Toro Rosso for maybe one season and that’s it. But my excuse is simple: this is Formula 1, this is my dream and something I could not deny. And the more you feel this opportunity is close, the more hungry you are to grab it.”

Now that the deal is set in stone for the upcoming season, comes the hardest part for the Anglo-Thai driver: to fit in. Not only with a new series but with a new environment, a new working philosophy and new people. Not counting the learning process when it comes to driving the most-powerful and technically-advanced racing car on the planet. But you would need more to concern the young man, whose path to the pinnacle of motorsport has taught him not to cut corners.“The biggest challenge will be to mainly focus on ,” he explains. “F1 is a competitive environment, much more than F2 or F3. It’s a tough place to be, especially for a first year in the structure that is Toro Rosso. You have to be on top of your game, be able to handle external pressure and deliver the results you’re aiming for.”

Testing will obviously be a crucial part of Albon’s preparation before heading for Melbourne, Australia, in March. As he didn’t take part in Pirelli post-season tests in Abu Dhabi, the former DAMS driver will have to deal with a limited amount of track time to get used to the future Honda-powered STR14. “Indeed, I won’t have many days of testing in the car, so I’ll have to be as prepared as I can due to the limited experience that I have,” he acknowledges. “But doing some testing in Formula E [at the wheel of the Nissan ‘Gen 2’ car in Valencia, ed.] has been helpful as some of the things you learn can be carried over to F1. So, it’s not entirely starting from scratch. In terms of goals, I guess it’s a bit early to foresee anything. I’ll get through every session, every practice, every qualifying, and race with the goal of learning and do my best.”

Until February 18th and the first pre-season testing scheduled on the Montmelo circuit of Barcelona, Albon won’t waste time to get properly ready. “Spending time in the simulator is on the agenda for me,” he confirms. “But it’s also about learning all those new things like engine mapping, data, procedures, steering wheel modes, etc. As well as regulations and pretty much everything about the car.”

Studying is one thing. Staying sharp is another. Apart from the simulator, Albon has no intention of staying away from a steering wheel in the cold days of Winter. “I’ll do a lot of karting, something which Toro Rosso really believes in for the drivers to keep fit,” he adds. “Obviously, it’s not the same as driving a single-seater but it’s enough to keep you sharp and it’s going to be good fun. I’ll be based in Lonato in January and February, because we’re not far from the Toro Rosso factory in Faenza but also because the guys from my old team, Intrepid, are in the same area. George [Russell, the new Williams F1 driver for 2019, ed.] and I have been trying for a while to get karts sorted out in the UK but never got round to it. So, when I told him I was going to be in Italy, he said: ‘ok let me know, so we can go race together’ [laughs]!

It’s no big surprise to hear Albon’s delight to get back behind the wheel of a go-kart. Like most of his colleagues, he has cultivated his love for motor racing at an early age through the practice of karting on a local, then international, level. Even though F1 was the main topic of our discussion, the temptation was too big to walk down memory lane and know more about this young guy’s journey. Luckily for him, Alexander could very early in his life count on a strong supporter.

“My father was the one pushing me to go racing,” he recalls. “Motorsport has always been a great passion. He raced himself too and didn’t have to pay for it [Nigel Albon notably competed in BTCC, Renault Clio Cup, FIA GT and Porsche Carrera Cup Asia between 1993 and 2007, ed.]. He’s the one who took me to my first race, showed me the British Grand Prix and joined me for my debuts. The first time I drove a go-kart, I was maybe four years old. I remember myself crying that day because I actually hated it [laughs]! It was really when I turned around seven that my dad bought me my own go-kart. At the time, we had a field near our house and that’s where it all started for me. I spent six months practicing, every day after school. Then, I turned eight and went for the first time on a real track.”

Drivers tend to find out quite early that motorsport is a tough business when they enter a very competitive arena where constant improvement is the key to success.“My first season in karting was difficult. I really struggled with performance and lacked experience,” explains Albon. “In my mind, I always wanted to become an F1 driver but I realized this first step was quite heavy. And because of my financial situation, it was almost from one race to the other, so I had to adapt quickly to progress but, sometimes, I felt that I wasn’t going to go any further.”

Still, it didn’t take long for Albon to consider racing as an activity that would be worth pushing forward. “After that first year and a half, I started to score podiums and everything became more serious. Then, I turned ten years old [in 2006, ed.] and we decided that I should go on a higher level. At that point, my father kind of handed the keys over to the professional team I was in. But all through my karting career, he was with me.”

As competitive as they’re willing to be, drivers don’t talk easily about their weaknesses. Still, the man is the first one to admit that miracles didn’t happen overnight for his younger self. “I think that confidence was my biggest issue,” he says. “When you’re eight years old and you go against drivers aged 12… no one says it was ‘scary’ but, in my first year of karting, I was missing a bit of race craft and patience, which are really important. Even pace-wise, I wasn’t amazing.”

“Then, I went to Malaysia to do one race, the first time I ever drove away from the UK. I finish the race in fourth and it gave me a lot of confidence. When I got back home, the pace was there and I could fight for the lead. So, this good result in Asia had really acted like a turning point and, from then on, I felt more confident. But being competitive is also about being able to compare yourself with other drivers, understand the data, etc.”

In karting, although young drivers can mostly rely on their mechanics and engineers to decrypt a lap time database, one sometimes needs to put the helmet down and find some interest in the more technical part of the job.“I think I was already good with understanding data,” remembers Albon. “First thing is the general feeling of the kart and learn how to become a fast driver. Knowing what you need to work on to be quick in a corner. Another thing; you can really feel everything that’s happening on track, which becomes more difficult in single-seaters as you have the suspensions to make the feeling of the car less easy. Karting teaches you about the basics, the racecraft, how to manage wet conditions, etc. I also believe that if you start young, you get to learn more quickly about yourself and better feel the environment you’re in.”

Following a string of strong results and titles on home soil, Albon took a step up by entering the KF3 category where he stayed three years (2008-2010) before making the jump to KF1. A fruitful period for the young Thai who got spotted by the Red Bull Junior Program. “2009 was a good year,” he recalls. “I remember competing against guys like De Vries, Marciello. Then, in 2010, I got signed by Intrepid and went against drivers like Verstappen and Gasly to become European and World Champion. I remember fighting against Max [Verstappen, ed.] who, already at the time, was this young guy everyone needed to beat. We had some good battles.”

Do you want to know more about Alexander Albon’s journey to F1?

Click here for the second part of our interview with the new Toro Rosso driver!

Categories: Karting, Special, From Karting to...