With another pole position and a top six for Maxwell Dodds in OK-Junior at Sarno, Parolin Racing Kart was looking like they would achieve the Zuera scenario again. However, the circumstances were very different in the second round of the OK and OK-Junior European Championship. Parolin’s performances and results in this very difficult competition were much more consistent in both categories. Three drivers in the top five of the Timed Qualifying and five victories in the Junior heats were outstanding aspects. In OK, despite numerous hazards, James Wharton in particular highlighted himself with a brilliant comeback of 15 places in the Final. 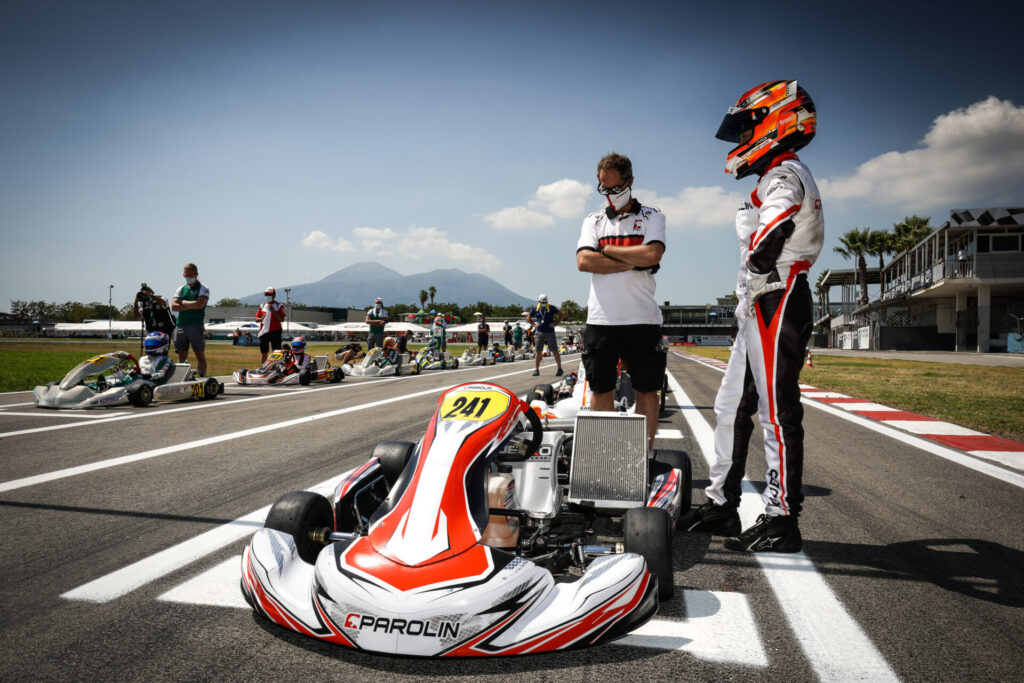 “It was a very tough weekend on the track”, commented Marco Parolin. “But our overall competitiveness was even better than at Zuera. The drivers and the team did a great job and the balance is very positive. Dodds had an outstanding run at the front of the OK-Junior class and I am convinced that he would have been able to finish in an even more convincing position. Rinicella proved that he is now to be counted on in the top 10. Trentino’s 4th fastest time and his two heat wins are also very encouraging.”

“Al Dhaheri has made a successful debut in the Junior class despite adversity. In OK, Wharton was in great form, undoubtedly able to finish in the top five, but he was a victim, like many others, of numerous crashes that changed the face of this event. Anyway, Parolin showed its strength in both categories and this is very positive for the rest of the season.”

Dodds in the spotlight in OK-Junior

Maxwell Dodds opened the score with a magnificent pole position among the 66 participants of the Sarno race. He confirmed with two race wins and three top-three finishes, which allowed him to take second place overall and to start from the front row for the Final. This place sometimes turns out to be a poisoned chalice. This was the case on the Neapolitan circuit because the young Briton was balked on the first lap and only finished the first lap 10th. He reduced his handicap as the laps went by before being involved in a crazy fight in the very last laps. His sixth position allowed him to join the provisional Top 10 of the Championship.

A hero of Zuera two weeks earlier, Valerio Rinicella was again convincing at Sarno. He started in fifth position in Qualifying and held the rhythm in the heats with among others a victory and two second places. Sixth at the beginning of the Final, he was attacked several times and was dropped, but he came back up each time and finished ninth with the fifth-fastest time of the race. Thanks to his perseverance, he is now fourth in the Championship.

Two other Junior drivers from Parolin Racing Kart also managed to qualify for the Final, which can be a great achievement considering the number of incidents that marked this competition. Giovanni Trentin had started in 4th position in the Qualifying Practice which allowed Parolin to count three drivers in the top five. He then won two heats, but two crashes sent him back to 24th position for the beginning of the Final. He was pushed on the first lap, but he came back up again before another incident forced him to retire.

Rashid Al Dhaheri was taking part in his first race since the restart, but also his first race in OK-Junior. Despite some problems in the pack, he drove two interesting laps and finished positively by regaining eight places in the final. Nicolas Ambiado showed a good level of performance with his 29th Qualifying time, but several contacts in the heats deprived him of the Final.

OK: Wharton emerges from the turmoil

James Wharton was on his way to excellent performance with his eighth-fastest time. He achieved two good Heats, including a second place. Unfortunately, two crashes caused him to fall back to 27th place for the Final. Despite the intensity of the race, he made an incredible comeback of 15 places by finishing 12th. Henri Sääskilahti was also delayed by a retirement in one heat. 25th on the Final grid, he had a difficult race and didn’t reach the finish line. For his return to international competition after two years away, the Italian Mario Schettino was confronted with a chaotic situation in which he didn’t manage to qualify.