Two weeks after taking part in the FIA ​​Karting European Championship – OK Junior in Angerville, Loïs Delbart was back in business this weekend on the Wackersdorf circuit, in Germany, to represent Belgium in the FIA Karting Academy Trophy’s opening round. For his maiden experience on the Pro Kart Raceland at the wheel of an OKJ chassis, the young Belgian showed improving performance within a highly disputed field facing capricious weather conditions through the competition. 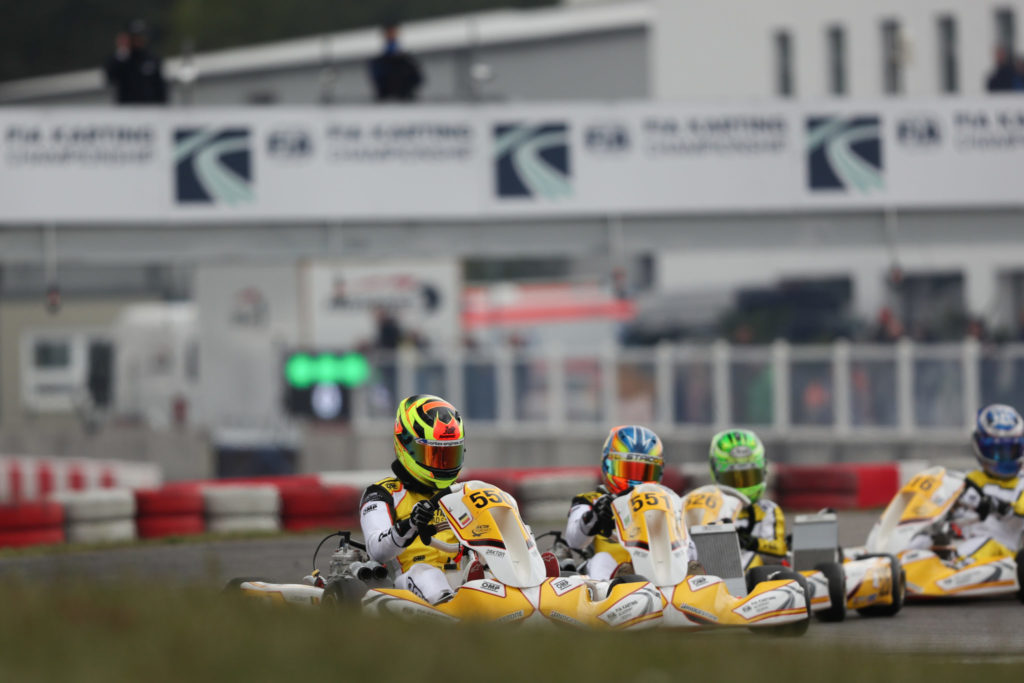 Even though he already knew the circuit of Wackersdorf from previous races in other categories, the switch to OK Junior regulation for this year’s FIA Karting ​Academy Trophy meant Loïs had to re-familiarize himself with the 1190 meters of the track at the wheel of his Exprit/Vortex chassis.

After the traditional Wednesday welcoming presentation followed by a briefing and an anti-doping information class, three 20-minute sessions were given the next day to the 51 participants to test their new material for the first time on track.

It wasn’t until Friday that the competition really started with the first free practices followed by Qualifying. An exercise which Loïs felt straight away comfortable with by setting the third fastest lap time in his series and the 11th best. An encouraging performance that put him in sixth position on the grid for his three upcoming Qualifying Heats.

On Saturday, the German heavens opened on Wackersdorf. In such conditions, Loïs finished 11th of his first race. In the second, also run on a wet track, he took a good start until an incident involving the drivers at the front made him lose ground in the opening lap leading to early retirement.

Tenth in a third and final qualifying round disturbed not by rain but by a yellow flag neutralization, Loïs accessed the Sunday afternoon Final where he would start from 25th position. Taking advantage of a dry track and a very-well prepared chassis thanks to his mechanic, the young Belgian quickly went past many of his rivals, getting close to a potential top ten before having to settle for the 17th final position.

At the end of an eventful weekend, this return to Wackersdorf as part of the FIA Karting​ Academy Trophy allowed Loïs to make further progress both in his search for performance but also in his understanding of the OK Junior chassis. A learning experience he will put to good use for the second round of the FIA ​​Karting European Championship where he will compete with VDK Racing on the Genk circuit, in Belgium, on May 18th-19th.