The closing day of the 2019 FIA Karting European Championship’s opening round for KZ/KZ2/Academy Trophy was disputed in dry conditions that allowed for thrilling competition on the Pro Kart Raceland of Wackersdorf, Germany. In the end, Anthony Abbasse dominated the KZ class, Emil Skaras emerged victorious amongst the KZ2 contenders and Robert De Haan confirmed his impressive pace on top of the Academy Trophy. 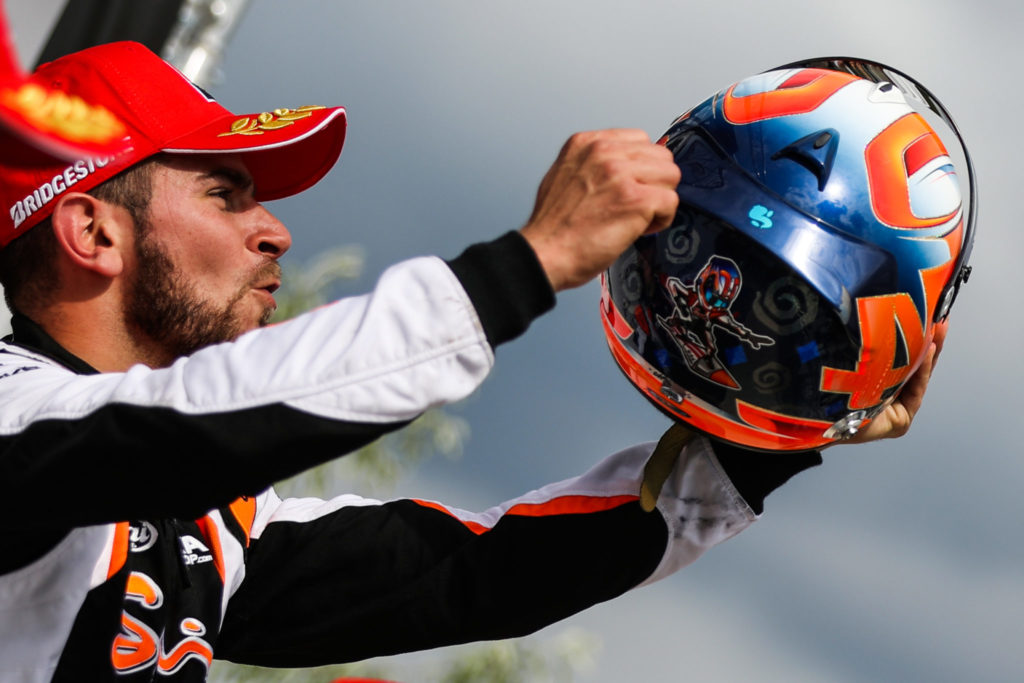 KZ: Abbasse from start to finish

Highly disputed all weekend with three different winners in the Qualifying Heats, the top category’s final victory fell into the hands of Anthony Abbasse on Sunday afternoon. The Frenchman took advantage of a perfectly-functioning Sodi/TM chassis to take the lead as early as the start ahead of the Polesitter Jorrit Pex (KR/IAME). The 2018 European Champion lost ground in the opening laps to Matteo Vigano (Tony Kart/Vortex) and Alessandro Irlando (BirelART/TM) who shared the second row of the grid. The latter climbed a position further and put pressure on the leader before his countryman re-took the second place before the halfway mark.

Unshakeable, Abbasse controlled his gap in the lead and clinched the win in front of Vigano and Irlando. In fourth place, Bas Lammers (Sodi/TM) missed the champagne for a second after producing an impressive race from 9th on the grid. His countryman Jorrit Pex crossed the line in fifth, followed by Marco Ardigo (Tony Kart/Vortex), Simo Puhakka (Tony Kart/Vortex), and Marijn Kremers (BirelART/TM). From 22nd on the grid, the Italian Fabian Federer (Maranello/TM) made up 13 positions to finish 9th with Stan Pex (KR/TM) completing the top ten instead of Lorenzo Camplese (Tony Kart/Vortex), penalized with 5 seconds for a wrong front fairing position.

Emil Skaras (Energy Corse/TM) took a spectacular victory in a KZ2 Final contested until the very last meters of the 26-lap race that opened the festivities on Sunday afternoon. Already amongst the strongest of the class through the Heats where he had won in three occasions, the Swede took an early lead at lights out in front of the Polesitter Alexander Schmitz (Tony Kart/Vortex) and Simone Cunati (CRG/TM). The two remained within close range of Skaras until lap 10 when the Italian went past for second place, a couple of laps before Schmitz was hit by a mechanical problem that forced him to retire. An unfortunate conclusion to a strong weekend for the German who had claimed the provisional lead on Saturday. Up front, Skaras wasn’t relieved yet as Cunati and a recovering Riccardo Longhi (BirelART/TM), distant 13th on the grid, kept chasing him until the finish line that they crossed split by just 0.138 seconds! David Vidales (Tony Kart/Vortex) took fourth place ahead of Paolo Besancenez (Sodi/TM) and Giacomo Pollini (Formula K/TM). Seventh on the line, Emilien Denner (Sodi/TM) received a post-race penalty that eventually promoted Philip Hall (Tony Kart / TM Racing), Giuseppe Palomba (Croc Promotions / TM Racing), Senna Van Walstijn (KR / TM Racing), and Alessio Piccini (Tony Kart / Vortex) one further rank up the top ten.

Robert De Haan remained untouchable for the final race of the FIA Karting Academy Trophy, celebrating in 2019 the start of its 10th edition. Showing an impressive pace all weekend, materialized by three wins in the Heats, the young Dutchman took the best start and dominated the 21-lap race from Pole to flag, pulling a 4.5 second-gap from his closest rival Joshua Coertze. The South-African finished on the second step of the podium ahead of Magnus Germansen Daae (Denmark) who both took a fast Paolo Ferrari (Italy) out of the second place after a close battle during the first part of the Final. Julien Gael (Indonesia) crossed the line in fifth place ahead of Charlie Wurz (Austria), the son of former F1 driver Alex Wurz, Fuki Tanaka (Japan), Paolo Ferrari, Rafael Modonese (Peru), Hwarang Kim (South Korea) and Luca Mars (USA).

Click here for the final classification in KZ, KZ2 and Academy Trophy.

The next round of the FIA Karting European Championship – KZ/KZ2/Academy Trophy will take place on the International Circuit of Naples in Sarno, Italy, from June 13th to 16th.