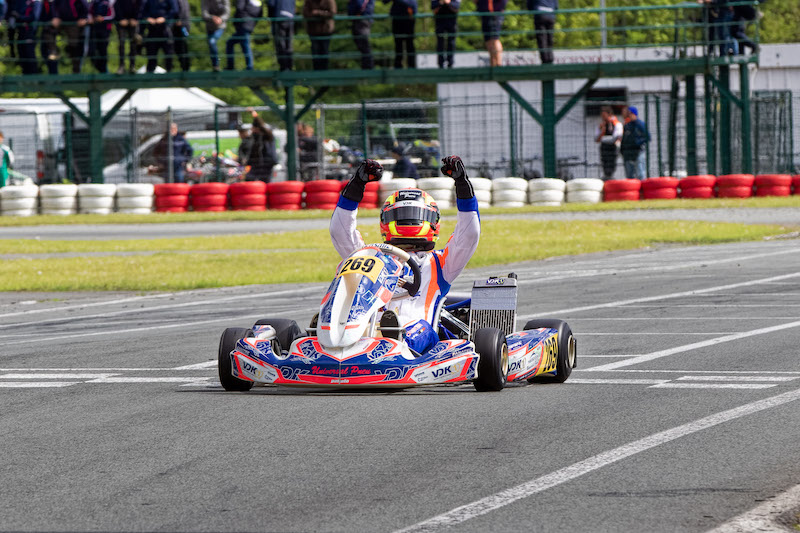 For its second event of the season, the IAME Series Benelux had planted its trestles on the Circuit de la Métropole in Ostricourt, near Lille. No less than 153 drivers have gathered in the Hauts-de-France region for an exciting race weekend. If a few rain showers brought their share of tension on Saturday afternoon, the track remained dry for the competitors on Sunday. And while the air temperatures were very cold, it was very hot on track with Finals that once again delighted karting enthusiasts by their intensity.

X30 Senior: first win of the year for Goldstein

Poleman and winner of three Qualifying Heats, Joey van Splunteren seemed to dominate the X30 Senior category in Ostricourt. But in the Final, the defending Champion couldn’t confirm his supremacy. The Dutchman was quickly overtaken by an authoritarian Elie Goldstein. The Bruxellois, vice-champion last year, had started from 4th position but he was untouchable at the decisive moment. Behind him, Corentin Collignon just snatched second place after a magnificent fight with Joey van Splunteren and Niels Koolen. In heated debates, the brothers Esteban and O’Neill Muth aimed for a spot of the podium before slipping to 5th and 6th ranks, O’Neill having been a little virile with Tuur Stalmans, finally 8th. Ranked close to the Top 10, the Frenchman Enzo Lévêque won the Rookies’ standings. Leader of this class after Mariembourg, Sam Balota was the unlucky one of the weekend by not getting his ticket for the Final.

In the standings, the regularity of Corentin Collignon allows him to take the lead ahead of Matteo Raspatelli, 10th this Sunday, Joey van Splunteren, O’Neill Muth and Tuur Stalmans. After his weekend missed in Marembourg, Elie Goldstein sits in 7th place.

X30 Junior: Ripley at the end of the suspense

The X30 Junior category (12-15 years old) is often the scene of thrilling races and this Ostricourt Finale was no exception! After a terribly intense and lively start to the race, the Englishman Zach Ripley and the Scotsman Cian Shields managed to escape and competed for the sprint victory. And if Ripley narrowly won, Cian Shields could console himself with reinforced leadership in the championship. Leader after the heats, Liam Mc Neilly – still a Brit – was the winner of a very lively hunting group ahead of the Dutchman Bart Ploeg, the Belgian Noah Maton, the Polish Jerzy Spinkiewicz, the Dutchmen Nathan Ottink and Dani Prins, the Frenchman François Dell’Atti and the Belgian Lucas Taelmans, all grouped under the checkered flag. Behind Cian Shields, Liam Mc Neilly is 2nd in the championship ahead of Bart Ploeg, Zach Ripley, and Noah Maton.

The fastest in the X30 Cadet Qualifying (11-13 years), Kimmy Abraham was slowed down by a carburetor problem in the first heat. The young Ittrois quickly took revenge by winning the second round, allowing him to return to fifth place in the provisional rankings. In the Final, the 2017 Mini Champion went back to the forefront to win a fantastic fight with Theo Pirmez and Rayhan Mouôya, who had started from Pole. Penalized 10 seconds for unsportsmanlike conduct, Theo nevertheless retrograded to 6th place and it’s Simon Lacroix who climbed on the small step of the podium. Fourth ahead of Wout De Ridder, the Dutchman Milan Kok retained the lead of the championship for one point against Rayhan Mouôya, with Kimmy Abraham coming third.

Mini: Outran on the line

Practically at home, Clement Outran won a magnificent victory in Mini (7-11 years) on the Ostricourt circuit. The young Frenchman, already the winner of a qualifying round, continued his duel with Sacha van ‘t pad Bosch during the Final. And it is finally for … 86 thousandths of a second that Clement prevailed in front of the Dutchman, who nevertheless reinforces his leadership in the championship after having scored the maximum points at the end of the heats. Third both in the qualifying rounds and the Final, Thibaut Ramaeckers came home as the first Belgian with his first podium in the IAME Series Benelux ahead of the Dutchman Dylan Visser and the Belgian Thomas Strauven. In the provisional classification, Sacha van ‘t Pad Bosch has a comfortable lead over Clément Outran and Thomas Strauven before the next round at Francorchamps at the end of June.

For his return to the competition, Olivier Palmaers made the powder speak in the category X30 Master (+25 years or + 75kg). Making progress throughout the weekend, he managed to slip into second place after the Qualifying Heats behind an Imperial Fabio Kieltyka. But in the Final, Olivier managed to follow his rival to carry a decisive attack at the end of the race. Knowing that this participation should remain a one-shot, it is nevertheless Fabien Kieltyka who realizes the good operation in the championship. Because behind the duo, the battle for the 3rd place between Hubert Bauthier (winner at Mariembourg) and Bjorn Verhamme ended with … a collision in the last corner! The 2018 champion Justin Bonnes didn’t ask so much to find the way to the podium ahead of Quentin Henry, Benjamin Berghmans, Bjorn Verhamme, and Alain Bazard, once again the best Gentlemen (over 45). Finally, 11th of this Final, Hubert Bauthier sees Fabio Kieltyka take the lead of the championship for 5 points, Justin Bonnes completing a very provisional podium.

Dominator at Mariembourg in X30 Super Shifter, Sten Dorian Piirimagi was surprised by the arrival of the rain at the Final, finished in 4th place. During this second meeting in Ostricourt, the defending champion took brilliant revenge! Author of the Pole position and leading after the Qualifying Heats, the Estonian flew to the Final to win with almost seven seconds ahead of Christof Huibers. The former leader of the championship could only limit the damage against Piirimagi while another Estonian Kaspar Korjus completed the podium. In the race for the laurels, Frédéric Op de Beeck and Sam Claes clung to the end of the course and the former received a penalty for a bad fixation of the spoiler. He slipped to sixth place behind Thomas Vansteenberghe and Ronan Waelbrouck. Sten Dorian Piirimagi who will arrive at Francorchamps as leader of the championship on 29 and 30 June before Christof Huibers and Sam Claes.