It’s not often that you get to make conversation with a president. So, when we learned that Mr. Jean Todt, President of the FIA, was to visit the FIA Karting European Championship round at Genk, we couldn’t let the opportunity pass. Joined by his former Ferrari F1 driver and current CIK-FIA President Felipe Massa, Mr. Todt sat with us to discuss the current state of Karting, its purpose for young drivers and why taking the Worlds to Brazil makes sense. 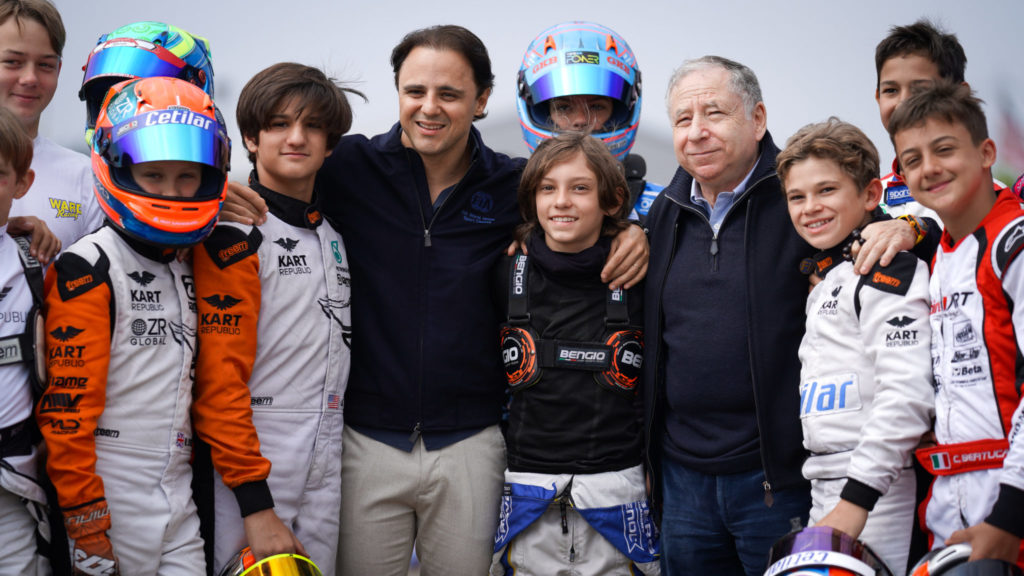 Mister President, what are your thoughts on the current state of Karting and the FIA Championships?

I put Karting at a very high level amongst the “Big Five” of the FIA [along with F1, Formula E, Rallycross and WRC, ed.] and I’m happy to see fresh blood in the organization with Felipe [Massa] at the helm of the Commission and James [Geidel, President of RGMMC] looking after the promotion of the events. From what I’ve seen at Genk, there was lots of strong action on track with close racing in both OK and Junior classes. The racing was healthy as well with good behavior shown by the drivers despite the close differences of speed between them. The track of Genk was really interesting to visit and the global atmosphere very friendly. It has been a good experience and Karting is definitely at a good level at the moment, moving in the right direction.

Looking at the future, how would you like Karting to evolve?

I think that Karting has always been important, Felipe [Massa] will answer to this better than me! For any driver, it is the prime access to motor racing and what we need to be careful is to keep the competition affordable. It requires a budget but we need to keep a high and safe level of competition but also affordable.

Over the past few years, the FIA has been working hard to simplify the motor racing ladder from F4 to F1. Do you think it can participate in an easier promotion of karting drivers towards single-seaters series?

It was indeed very important to re-build a good pyramid. With F4, F3, F2, and F1, we now have a more simplified ladder. There’s also the Super Licence system. So, if you want to have a chance to compete one day in F1, you have to collect a minimum of 40 points on the way. So, clearly, it’s your talent that will allow you to go to the highest level of competition. Formula 1 is the pinnacle of all series and all the drivers come from karting.

We see F1-related names getting more involved in Karting than before (Rosberg Racing, Sauber Junior, McLaren with TB, etc.). A good sign?

It makes me happy to see that. All those young drivers want to climb the ladder, so with those F1 brands involved, it’s like being at school for them ! If you consider F1 to be University, you have to start with Elementary school. Young drivers need first to compete in minor series to get the interest and support from F1 teams and then, hopefully, start a formation program. So, that’s great.

Did you get to speak to some young drivers while at Genk?

We visited all the facilities and had the chance to speak to lots of drivers and teams. It’s good because they have ambition. But, as they are still young, Karting provides them with the opportunity to learn, not only about racing but also about discipline. They can learn how to behave on and out of the track. That’s the reason why I’m very thankful for the promoter to include the notions of safety. Because, as I always say, if you want to reduce the number of victims on the road, it starts with education. On a racing track, people know this and a driver, if he does something against the rules, gets a penalty. That’s how it should always be on the road if we want to have safer drivers there too.

There have been talks regarding a potential World Karting Championship taking place in Brazil in the near future. What are your thoughts on this topic?

FIA is the global Federation of Motorsport and Europe is only a part of the World. Our goal is to make any category of motorsport more international. At the moment, I feel it’s a bit unfair because if you want to compete in the World Championship but you are a driver living in Brazil, for instance, you have to come all the way to Europe. So I think it’s important that the Competition also goes to those countries.

Felipe Massa: This is the World Championship we’re are talking about, not the Europeans. That’s why we are trying to move those important races to countries that are able to help in the costs of the organization. So we can find a balance in terms of budget to allow all drivers who want to compete to come.

Todt: FIA has 150 countries within its sportive regulations. And the first access to motor racing is karting. So, we want to be able to give access to motor racing via karting to all of our members. Not everybody can afford an event like this one. But thanks to the involvement of the CIK, we have been able to implement some kart racing events by simply supplying our clubs with advice, safety devices and so on, so competitions can be organized in all kinds of places.

Motorsport is at a crossroads in its evolution with hybrid and electric technologies becoming more and more prominent. Electric energy is starting to be tested in Kart racing. Would you like to see that happening on a bigger scale?

Motor racing is evolving with amazing new technologies, as you said. Motorsport is not only a show but also a laboratory. You can see that in Formula E. Five years ago, we had two cars to finish a 45-minute race, now we only need one. Clearly, we want electricity to come to karting and maybe organize events more in city areas. There’s also the concern of protecting the environment. So, it makes sense to give access to new technology, hybrid or electric.