183 drivers from more than 20 nations started last weekend in the second round of the German Karting Championship. At the Prokart Raceland Wackersdorf, the international starting field had to deal with difficult conditions. The five-grade series showed themselves very balanced with nine winners in ten races. 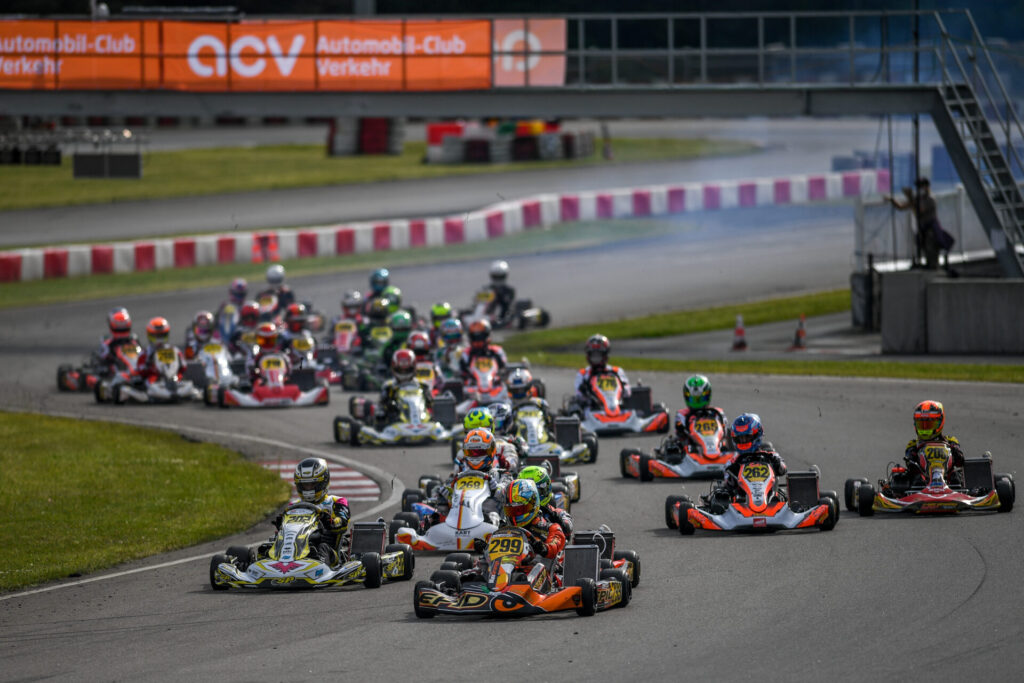 Four weeks after the successful kick-off to the highest German karting racing series in Kerpen, the ranked races three and four now took place in Wackersdorf in Upper-Palatine. The 1.197 m-long Prokart Raceland as well as the team of the ACV Automobil-Club Verkehr e.V. guaranteed another smooth conduct of the event.

The weather, on the other hand, was an uncertain variable. On Saturday and Sunday, a high probability of rain caused thoughtful faces of the drivers and teams. In the end, the big rain showers didn’t take place though and sunshine on Sunday made for the best conditions on the race track during the Finals.

After the kick-off in Kerpen, the first title favorites were clear. Now it was time to confirm these. But there were considerable switches in all grade series and there were nine different winners in ten final races. Only in the DJKM did Maxim Rehm achieve a double victory. Next to him, Herolind Nuredini, Niels Tröger (both DKM), Emilien Denner, Senna Van Walstijn (both DSKM) as well as Paul Rieberer and André Walter (both DSKC) were also successful.

The German Electric Kart Championship (DEKM) had its season kick-off. 15 drivers from twelve nations made for an international field. On Saturday and Sunday, there was qualifying, a Prefinal and a Final respectively. Right at the start on Saturday, reigning champion Luka Wlömer won again. On Sunday, Aleksi Jalava from Finland dominated the events with a pole position as well as victories at the Prefinal and Final.

The field of the German Karting Championship presented itself very balanced on the 1.197 m-long Prokart Raceland. Reigning vice-champion Luca Griggs (KSM Racing Team) showed a first highlight at Qualifying, but followed on second place behind Sandro Holzem (CV Performance Group) after the heats.

Towards the first Final, the balance of power changed again. Herolind Nuredini (TB Racing Team) gained the leading position during a strong starting phase and kept this throughout the further course of the race. After 21 laps, he rejoiced about his first victory in the top-class of German kart racing: “This was a great but also tough race. In the end, I had a slight advance and I’m very happy to have won, also thanks to the support of my team.” Holzem followed in second place in front of Elias Olsen (KSM Official Racing Team). Niels Tröger (SRP Racing Team) and Moritz Wiskirchen (TB Racing Team) showed strong catching-up races. From 11th and 19th starting positions, they fought their way forward into the top five.

Things got exciting during the second Final: Holzem won the start and even had a slight gap. Due to a slow phase, the drivers got closer together again though – the restart didn’t go according to the leading driver’s wishes. Holzem fell back to ninth place and had to watch as Tröger strengthened his Championship lead due to his second victory of the season. “After bad luck during yesterday’s heats, I was able to fight my way forward again today and gained important points. The whole team did a fantastic job”, rejoiced the German at the finish line. Nuredini ended up on the podium again in second place followed by Griggs, Olsen, and Wiskirchen.

Championship ranking DKM after 4 of 10 races:

The junior class was completely filled up with 54 drivers and brilliantly manned. At the front, things were the same as they had been in Kerpen though: Akshay Bohra (TB Racing Team) led the youngsters after Qualifying and the heats. But the German Maxim Rehm (Ricky Flynn Motorsport) was already very close during the heats. Both of them were at the top of the interim rankings with the same amount of points.

Everyone was therefore excited about the fight for victory during the first final race. While Rehm didn’t catch a good start, Alex Powell (SP Motorsport) took first place. The Jamaican wasn’t able to defend his position though: Rehm and Bohra passed him by and drove off. The leading German showed a solid performance: He kept his pursuer at bay until the finish line and celebrated his victory in front of Bohra and Powell. Best rookie of the field was Jens Treuer (CV Performance Group) in fourth place, followed by Tom Kalender (TB Racing Team) who ended up on fifth place after a great catching-up race.

During the second Final, Rehm left no doubt about his performance. The protégé of the Championship team Ricky Flynn Motorsport showed a solid performance again and secured the only double victory of the weekend. “I’m very happy to have won. Both weren’t easy races, but everything went well. I’d like to thank my whole team in the background for their support”, the 13-year-old rejoiced in his winner’s interview. Lenny Ried (Lanari Racing Team) caused a German double success by coming in second. Bohra, Jonathan Weywadt (RS Competition), and Powell completed the top five.

Championship ranking DJKM after 4 of 10 races:

2018 DSKC-Champion Emilien Denner’s comeback at the German Karting Championship with the Intrepid Driver Program was a strong one. The Frenchman achieved the best time in Qualifying and drove among the front field during the heats as well. He wasn’t able to defend his lead though – routine driver Fabian Federer (SRP Racing Team) took it on Saturday evening.

During the first Final on Sunday, Denner corrected the Championship again though. Due to a perfect start, he took the lead and defended it throughout the 21 laps until the finish line. “It’s a real pleasure to drive a DKM race again. The competition is strong and I’m accordingly content with my victory. In two weeks, the European Championship is going to take place here and we are well prepared”, rejoiced the winner at the finish line. Adrien Renaudin (CPB Sport) caused a French double victory by coming in second. Federer also ended up on the podium in third place and therefore was the best regular driver of the German Shifterkart Championship in front of Senna van Walstijn (CPB Sport) and fast rookie Kris Haanen (KSM Official Racing Team).

The starting phase of the second Final was a lot more exciting than the one in the morning. Van Walstijn was the winner of a fight of three drivers. The Dutchman led the field after the first third of the race and defended his position until the finish line. Behind him followed kick-off winner Denner – but a spoiler penalty threw the 19-year-old back to seventh place. Thereby, brothers Stan and Jorrit Pex (SP Motorsport) moved up to second and third places. Renaudin and Federer completed the top five.

Championship ranking DSKM after 4 of 10 races:

New faces could be seen on the winners podiums at the DMSB Shifterkart Cup, even though Jakob Bergmeister (SRP Racing Team), one of the favorites, was still ahead during Qualifying. During the heats, the rookie fell back to the field of pursuers though and André Walter (Kart Performance Racing) took the lead. The Birel ART driver already lost his position to Paul Rieberer (Birel ART Racing KSW) from Austria during the start of the first Final though. During the course of the 21 laps, he gained an advance of more than three seconds and celebrated his first victory of the season. “It’s very cool to have won; we weren’t expecting this. The competition was really strong yesterday, but we had good tire management and were, therefore, able to defend the lead”, he summed up. Walter came in second in front of Marvin Langenbacher (RS-Motorsport), Lukas Gridjan (Birel ART Racing KSW) and Kerpen-winner Thomas Imbourg (CPB Sport).

Due to a courageous start, Jeffry Fikse (W.D. Fikse) rushed to the front during the second Final and stayed there at the beginning. During the further course of the race, he had to let Walter pass him by though, who then won the race. Behind the Bavarian, the fastest driver of Qualifying, Jakob Bergmeister, showed a great catching-up race – from 11th, he ended up in second place. Fikse came in third in front of Langenbacher and Gridjan, who ended up in the cup ranks for the second time that weekend. Winner André Walter was in a great mood during his interview: “The first few laps were very difficult, I lacked the necessary speed. But things picked up and I defended my lead. The fight for the title is going to be really exciting now.”

Championship ranking DSKC after 4 of 10 races:

After the tight beginning of the season, the German Karting Championship is now going to take a small break and is going to be back at the international race track in Belgian Genk after a one-year break from July 30th to August 1st. There, the half-time champions of the 2021 season are already going to be decided. Next to the four main grade series DKM, DJKM, DSKM, and DSKC, the DEKM is also going to take place again in Belgium.