The second round of the 2021 IAME X30 Euro Series, taking place in Zuera, might have started in summer-like conditions, but ended on a fully wet Sunday. Despite the unlikely weather change, the power balance between the drivers largely remained the same, giving a great show for the Finals! 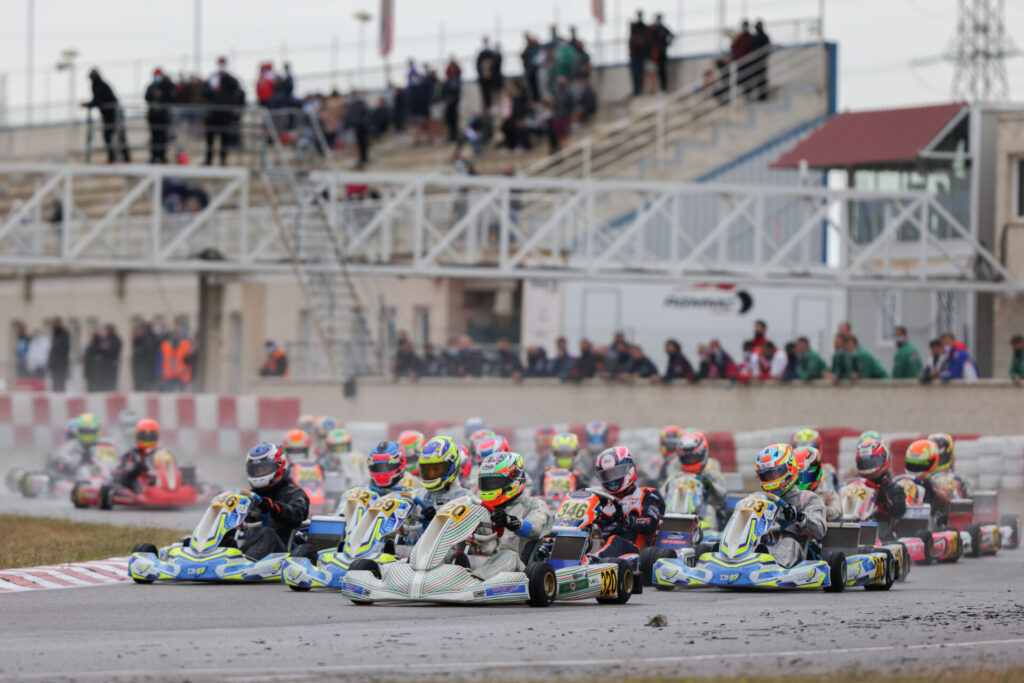 The fast and flowing track of Zuera, in the proximity of Zaragoza, region of Aragon in Spain, welcomed the three fully-fielded categories of Mini, X30 Junior, and Senior, in near-summer conditions. All the usual top teams and drivers were joined by several new guest appearances. At the end of the event, a very strong Roman Kamyab took the win in Mini, Kanato Le got his first taste of victory in Junior, and Callum Bradshaw showed his strength and experience in Senior!

After two qualifying practice groups on Friday, it was two Spaniards, Raul Zunzarren-Perez (Monlau Competicion) and Sandro Perez-Sanchez (MDC Racing) who were on top, joined by Tiziano Kuzhnini (Spirit-Racing.ch).

In the wet Sunday morning’s Pre-final, Roman Kamyab made a gap of four seconds to Raul Zunzarren-Perez. That would pave the way for pole in the much more closely contested Final, with Kamyab again clinching the win, but only a fraction ahead of Luna Fluxa, and Harrison Mackie, making it a full Fusion Motorsport podium!

The poleman started strong, taking the first victory in the Qualifying heats, followed with wins from Ivan Arias-Chavarri (AC Motorsport), Harrison, Vinnie Phillips (Strawberry Racing), and Kanato Le (Strawberry Racing), with the latter showing a glimpse of what was to follow after making up 30 places from his Qualifying practice position. Phillips and Arias-Chavarri were the drivers to secure the front row for Sunday’s Pre-final.

In the Pre-final, Le jumped to the lead and showed his potential, taking the pole for the Final ahead of Phillips an Harrison. While there was a lot of action on the Final, the results largely remained unchanged with Le securing a strong victory with Harrisson and Phillips swapping positions between them.

The Senior category was the most closely contested by no less than 79 drivers! This made for a great challenge from the first moment, with Ivan Bataller-Camarena (AC Motorsport) and Santiago Vallve (MOL Racing) topping the Qualifying practice.

Oliver Greenall (Fusion Motorsport), Enzo Lévêque (Team KLN), Vallve, Clayton Ravenscroft (KR-Sport), Callum Bradshaw (Strawberry Racing), Mark Kimber (Strawberry Racing) and Pedro Hiltbrand (Fusion Motorsport) all shared heat wins, but the man on top for Sunday’s Pre-final was Vallve with Greenall set to start on the outside row. It was notable that Bradshaw made no less than 19 positions from his Qualifying, and Sam Balota was storming through making 60 positions!

Bradshaw demonstrated with speed and experience on Sunday sweeping both Pre-final and Final with Cian Shields and Sam Balota right behind them, with some great comebacks from Lévêque, Mathilda Olsson (Fusion Motorsport), and Kimber, the last two coming back all the way from the bottom half of Friday’s Qualifying!

The points race after Round 2

All three categories’ points are still wide open, but the drivers at the top are starting to establish themselves. In X30 mini, it looks like a battle between Roman Kamyab and Sacha Van’t Pad Bosh, closely followed by Luna Fluxa and Harrisson Mackie! Theophile Nael maintains his lead in X30 Junior but is now in striking distance of Kanato Le and Bart Harrison. Finally, Callum Bradshaw takes over in X30 Senior despite his penalty in Belgium, with Enzo Lévêque and Aaron Walker just behind.

RGMMC is pushing more than ever its media exposure with an increased presence in the social media space added to the already industry-leading live timing and live streaming coverage.

Results, photo and video highlights and all information updates were posted on facebook and Instagram, in addition to interviews and highlights that were made available on the RGMMC Productions Youtube channel.

The third race of the 2021 IAME X30 Euro Series is scheduled to take place from July 29th to August 1st on the 7 Laghi International Kart Circuit, in Castelletto di Branduzzo, Italy.