After winning the WSK Euro Series and the FIA Karting European Championship, the team of Christian Voss was able to cheer again last weekend. In Finland, the Kart Republic team won the FIA Karting OK World Championship – the highest trophy in international karting! 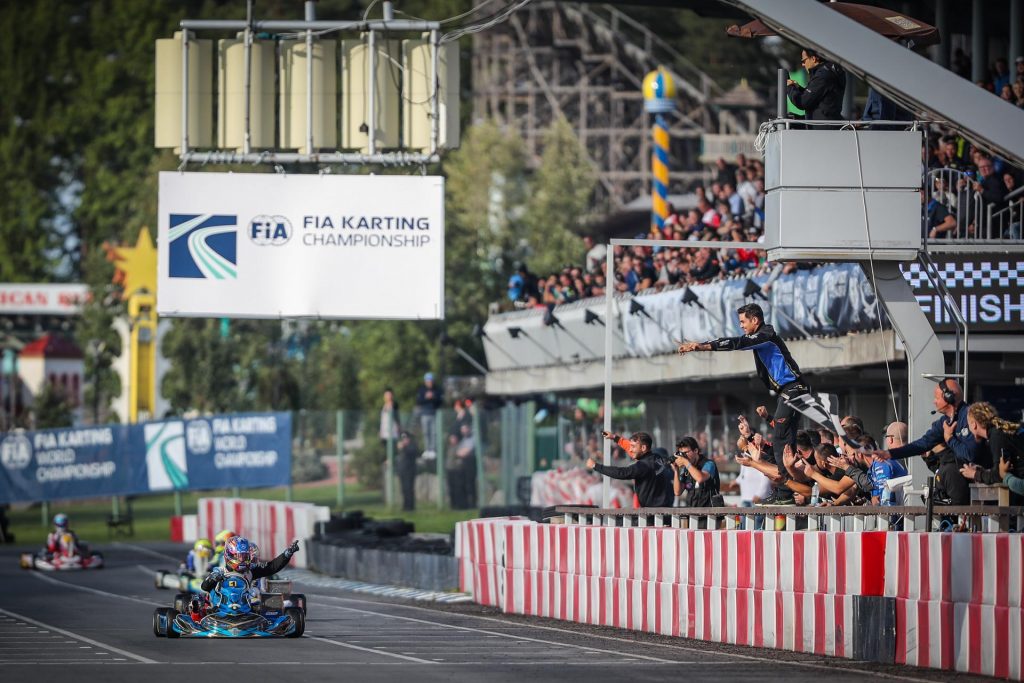 With the reigning World champion Lorenzo Travisanutto, the CV Performance Group was already one of the favorites for the victory before the big race weekend in Finland. The 1,200-meter-long racetrack in Alahärmä provided impressive scenery. The 191 participants drove on all three race days in front of full spectator stands. The weather caused a stir with rain and sun alternating all the time, turning set-up choices into a challenge for teams and drivers.

After the Qualifying Heats, Lorenzo Travisanutto fought his way up to a front-row starting position in the OK class and went into the Final in third place. Already at the beginning, he drove up to the second place and put the leader under pressure. In the eleventh lap, he succeeded in the decisive maneuver and made it to the chequered flag, securing his second World title in a row!

“Wow, what a year”, the Italian beamed on the podium. “I would like to thank all my partners for their excellent support. It’s an incredible feeling to be World champion for the second time!”

Local hero Nikolas Pirttilathi made a perfect start in Qualifying being placed fourth and won two of the five heats. However, a failure in the first heat threw him back a little, which ranked him 19th in the intermediate standings. On a half-dry track in the Final, he drove onto the tenth position and was the second-best Finnish driver. In addition to him, Kobe Pauwels also moved into the Final and saw the checkered flag in 25th position.

The German driver Sandro Holzem did not make it into the final round. The karting newcomer is completing his first full season and literally jumped into the cold water in Finland. From Qualifying to the heats, he showed great development and kept getting faster. The same for the only OK-Junior driver Peik Abrahmson from Finland who showed a positive performance among the youngsters.

Christian Voss (CV Performance Group Team Manager): “I am speechless! After the numerous national successes, we have made it onto the international stage this year and the results exceed all our expectations. WSK champion, European and World champion, with that we have won the three biggest championships and the season is not over yet. A big thank you to the whole team for their great work!”

The team will continue competing next weekend with the ADAC Kart Cup in Wackersdorf. The next title decisions will be made at the end of September with the Final of the ADAC Kart Masters and the German Kart Championship where the CV Performance Group has the best title chances in both competitions.