The 2019 season turned into a superlative for the CV Performance Group. This past weekend, Lorenzo Travisanutto won again at the FIA Karting European championship, this time at Kristianstad, Sweden, which was his fifth consecutive victory making him one of the strongest candidates for the European championship title. 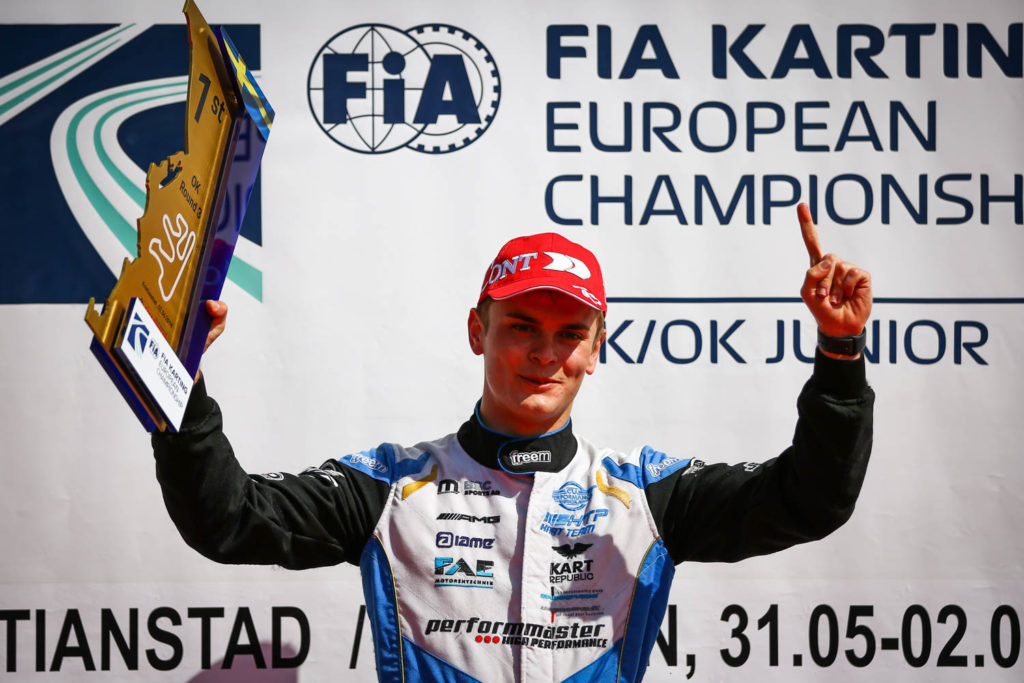 After his triumph two weeks ago in Genk, the Italian driver participated at the European championship race for the title with the CV Performance Group and started on the 1.221 meter-long Asum Ring in Sweden. Already in Qualifying he counted amongst the top drivers being placed second and had victories in four of his five heats.

An impressive tally that placed second on the starting grid for the Final. In the 25 lap-race, he showed his full potential, taking over the leading spot after only a few laps not to lose it until the chequered flag. In the end, his direct rival came close but Lorenzo kept the necessary calmness and won. Another victory that places him only two points from the championship’s leader with a strong chance for the European title with the final showdown taking place mi-July at Le Mans.

Additionally to Lorenzo, two of his teammates Nikolas Pirttilahti karting and Kobe Pauwels made their entry into the Top 34 driver-Final. The Finnish driver was placed took the eighth-fastest lap time in Qualifying and confirmed his performance in the heats. In the Final, he also delivered a great race and was partially ranked eighth. Ultimately, he saw the chequered flag eleventh position but subsequently got a front fairing penalty which placed him on rank 16. In the European championship, he’s currently in 13th place.

The young Belgian driver Kobe Pauwels celebrated his first points in the European championship in Kristianstad. In the heats, he was sensational and achieved four strong results being placed in positions four, five, six and nine. Unfortunately, being placed on rank 21 in one heat threw him back to 18th position in the Final. Thanks to another great performance, he fought his way three positions up and ultimately made it onto place 15 in the points rankings.

Head of the team, Christian Voß, was in the best mood after this weekend: “I am slowly lacking words. This is the fifth weekend where we drive home with a trophy in our luggage – it could not go any better. Also, Nikolas and Kobe delivered strong results and underlined the possibilities of our race material by Kart Republic and IAME. I’d like to thank all the drivers, mechanics, team members, partners and sponsors for their support and the first-class collaboration.”

After the race marathon of the past few weeks, the team can now take a breath. They will get back on track on July 20th to 23rd at the WSK Euro Series in Lonato. However, already this upcoming weekend both GT4-fosterlings Luzi Trefz and Jan-Philipp Sprigob will start the second run of the ADAC GT4 Germany on the Red Bull Ring in Austria. Trefz also participated this weekend at the GT4 European Series on the Paul Ricard Circuit and finished the races sixth and second in his category!