Present with 11 drivers in Sweden, VDK Racing once again showed its strength with Marcus Amand emerging as the FIA Karting European Championship leader on the Asum Ring of Kristianstad! 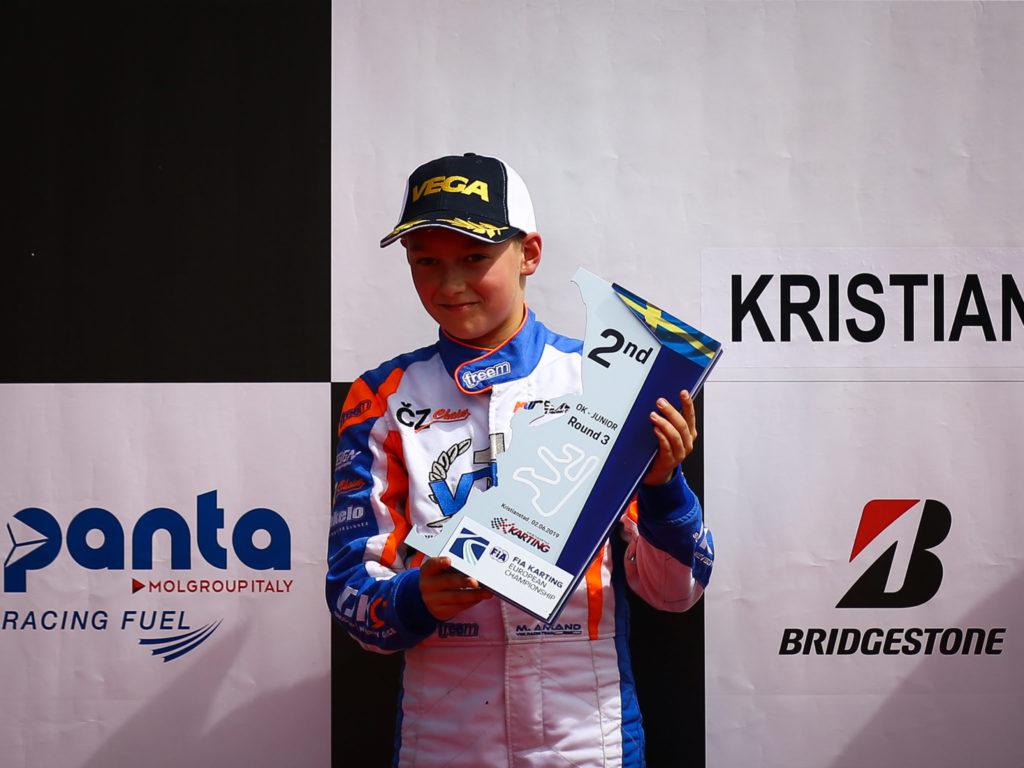 Two weeks after his maiden win at Genk, Marcus Amand offered VDK Racing its second consecutive podium in this year’s European Competition on the same track where the Belgian team conquered the World Junior title with Victor Bernier, last September.

Ninth-fastest out of 108 drivers in Friday’s Qualifying, Marcus patiently built his weekend in the heats where he finished runner-up three times and won his penultimate race. From sixth on the Final’s grid, he jumped well at lights out and made his way up to second position where he settled for good after some strong wheel-to-wheel battles. With two podiums and 68 points since Angerville, Marcus now leads the overall Junior standings with one race to go on the Circuit of Le Mans, coming July.

Another equally strong performance for VDK Racing in the Junior category came from Maxime Furon-Castelain who qualified seventh overall, managed three Top Three-finishes in the heats with two fastest laps, and secured his place for the first European Final of his young career, only a few days after celebrating his 12th birthday! In the Final, Maxime kept his head down and climbed up the field to be classified 21st, a great effort for his maiden final race at this level!

Enzo Peugeot showed great dedication as well in his Qualifying Heats where he finished twice close to the Top Ten, Loïs Delbart also taking advantage of an encouraging pace all weekend on the Asum Ring to take a tenth position as best personal result.

Like at the previous round in Genk, Franck Chappard showed the extent of his experience amongst the 80 competitors of the OK category. Constantly among the best on track, the Frenchman saw the finish line four times in the Top Ten of his heats. Qualified for the Final, his constantly-improving pace enabled him to overtake his rivals lap by lap up to 19th position.

Twice classified within the Top Ten during his heats, Oliver Goethe only missed the Final by a hair’s breadth, ending up 35th in the intermediate classification, one rank ahead of his teammate Loris Cabirou who also, despite three top results including a second place, missed it for a mere two points.

For his third European weekend with the team, Sami Meguetounif started on the right foot on Friday by being the fastest of the Senior team against the clock! Starting from the fourth grid row in the heats, he crossed the checkered flag twice in the Top Ten but couldn’t eventually convert his overall good pace into qualifying for the Final. Still, Sami showed constant progress that can only announce better days to come.

Producing equally-solid performances in their qualifying races, characterized by a ninth and two tenth positions, Nicolas Picot also saw his weekend coming to a premature end, like Thomas Imbourg and Tom Uzan whose speed and the amount of gained positions in the heats would have deserved better!

Eric Verdaasdonk, Team Manager of VDK Racing: “We can be satisfied with our weekend, the level of performance was there although we faced some difficulties with tire management in the OK class. We are leading the Championship but I prefer to stay with my feet on the ground for now. We need to keep working hard to prepare for the final round at Le Mans, a circuit that we’ve known for years. But, again, just because you are familiar with a track doesn‘t mean that everything will unfold easily. We will keep our usual approach for this race with the victory as the main target. Hold ourselves back is not how we do things at VDK!”

The final round of the 2019 FIA Karting European Championship – OK/Junior will take place on the International Circuit of Le Mans, in France, from July 19th to 21st.