26 Qualifying Heats have kept the South Garda Karting Circuit busy this Saturday as the Round 2 of the WSK Super Master Series is getting near its conclusion. But the nearly 340 drivers competing on the prestigious Italian racetrack will be up early on Sunday to tackle the last qualifying races (only for 60 Mini and OK) before the Prefinals and Finals to name each class winners. 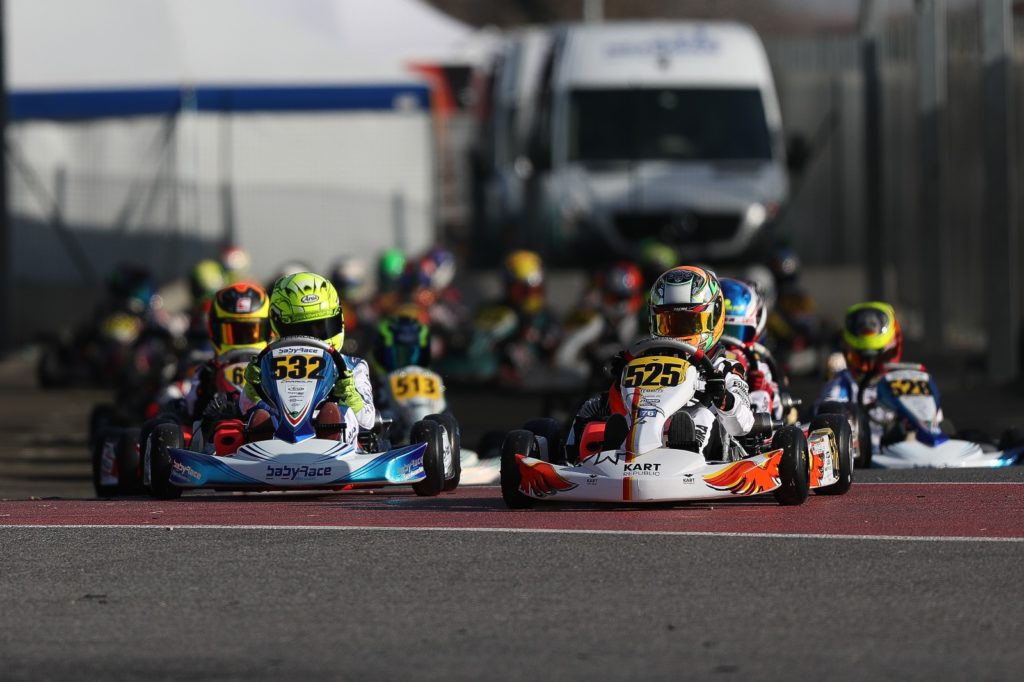 Second-fastest overall on Friday, the Belgian Eyckmans (Parolin/TM) put his Qualifying performance to good use by winning three of his four Heats and conclude Saturday in the leader’s seat. Still provisional, today’s ranking in the 60 Mini class will be confirmed once all drivers have been through their on-track duties as three last Qualifying races at set to take place on Sunday morning. Rashid Al Daheri (Parolin/TM) also had a good day at the office taking two wins and places that put him up front in second place, followed in third by Friday’s Pole-sitter Akshay Bohra (Parolin/TM), winner of two Heats as well. Andrea Filaferro (Tony Kart/TM) classified in fourth place thanks to two wins with Maskim Orlov (Parolin/TM) closing up the top 5.

Other Heat winners of the day include Francesco Marenghi (Tony Kart/TM, 6th), Mikkel Pedersen (Parolin/TM, 12th) and Joel Bergström (Parolin/TM, 26th). After cumulating three top 4-finishes, Alex Powell (Energy/TM) lost the second position in his last race due to a 10-second penalty for overtaking, along with other drivers, under a neutralisation. The Jamaican was consequently pushed further down to 18th position overall.

Nikita Bedrin (Tony Kart/Vortex) was unbeatable in the Junior category with the Russian driver aligning five Heat victories to lead the field and start the Prefinal A from Pole. The Prefinal B will be led at the start by Kart Republic’s Andrea Kimi Antonelli (KR/IAME), who put aside his fourth place-finish from Friday to score two wins along with two-second places. Winner of one Heat to start the weekend, Josep Marti (Tony Kart/Vortex) came close to the top 3 in multiple occasions to finish third overall (front row of the Prefinal A). In fourth, Jamie Day recovered well from a distant 26th time in Qualifying to grant himself the Prefinal B grid front row, while Marcel Kuc (Parolin/TM) ended the day in position with one win. Other victors include Artem Severiukhin (Tony Kart/Vortex, 6th) and Marcus Amand (KR/IAME, 10th) with two Heats each, as well as Andrey Zhivnov (Kosmic/Vortex, 7th).

Gabriele Mini’ (Parolin/TM) drove at his best this Saturday around the 1200 meters-long circuit of South Garda where the Parolin driver claimed all of his three Heats to top the provisional classification. The class Pole-sitter Dino Beganovic (Tony Kart/Vortex) brought back two race wins to appear in the second place ahead of Dexter Patterson (KR/IAME) who is yet to repeat his winning-result of his Friday’s Heat but still finished second and third. A similar set of results for Brazil’s Gabriel Bortoleto (CRG/TM) with also one win in the bag to position himself in fourth, followed by Lorenzo Travisnutto (KR/IAME) left without a win so far.

Like for the 60 Mini, the Heat general classification for the OK will be confirmed on Sunday morning with two more races for all Groups except the E, whose leading driver this Saturday is Noah Milell (Tony Kart/Vortex), 9th overall with places as best personal results. Winner of one Heat, Joe Turney (Toney Kart/Vortex) will have one last chance to double his score tomorrow morning and maybe climb up the order from his current 7th place.

Back to the Sodikart factory team for 2019, Bas Lammers (Sodikart/TM) has been showing some great form since Friday. With two Heats won and a second place, the former World Cup winner leads the ranking in the gearbox class and will start the Prefinal A on Pole. Despite a blank winning-record, Giuseppe Palomba (CrocPromotion/TM) managed to finish each of his three Heats in the top 3 to get the Prefinal B‘s front start position. Friday’s fastest man and Heat winner Adrien Renaudin (Sodikart/TM) ended up in third place overall after twice missing the front positions. But the reigning KZ2 European Champion will be right by Lammers’ side when the lights of the Prefinal A go green.

Fourth in the ranking, Francesco Celenta (Praga/IAME) scored three top 3-finishes and will accompany his fellow countryman Palomba on the Prefinal B’s front row. Following in fifth place is Marijn Kremers (BirelART/TM) with one win under his name. Further down the order (15th), Anthony Abbasse (SodiKart/TM) turned his Friday DNF into forgotten memory by winning his two Heats of the day. The recent Lonato Winter Cup winner will start the Prefinal A from 7th position.

The Round 2 of the WSK Super Master Series finds its conclusion this Sunday with the remaining Heats for both the OK and 60 Mini classes followed by the Prefinals and Finals for all four categories.

Click here for the official Live Timing and Live Streaming to follow the second weekend of the Series promoted by WSK Promotion!