Marco Ardigò conquered both the victory and the 2019 WSK Euro Series Title last weekend at South Garda, proving the supremacy shown by Tony Kart in the KZ2 category. Simo Puhakka, winner of the 1st round, finished second in the Series, while Nikita Bedrin sprang forward to the third place of the OK-Junior standings. 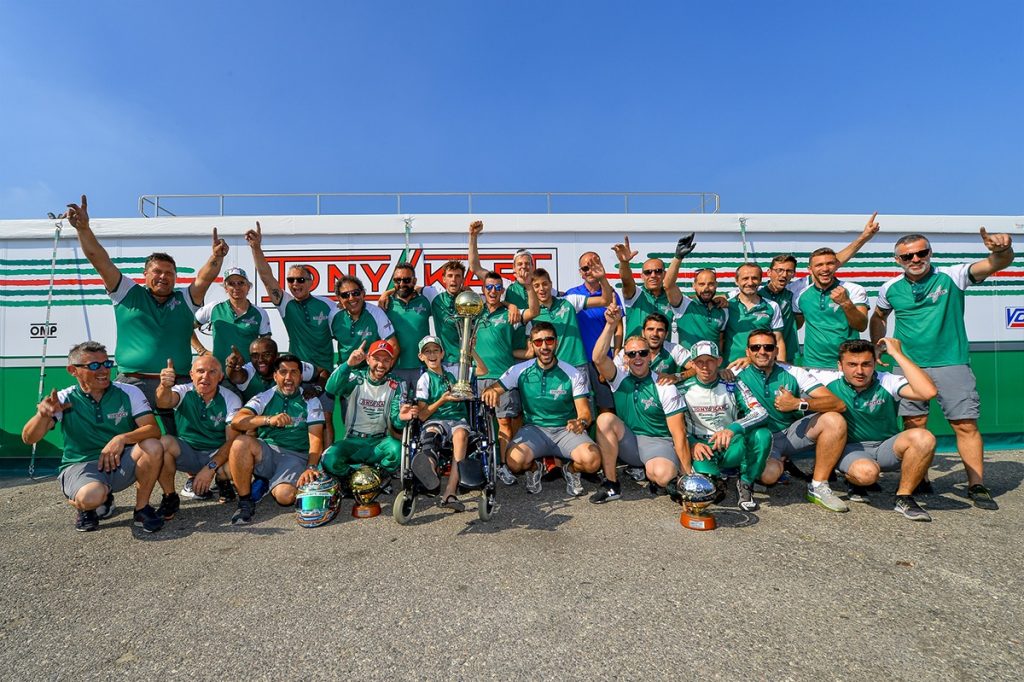 Target centered for the Tony Kart Racing Team in the previous weekend at the South Garda Karting in Lonato, where Marco Ardigò crossed the finishing line as the victor on Sunday, becoming the WSK Euro Series Champion for the KZ2 category. The fantastic result came at the end of a weekend in which the drivers brought the Tony Kart 401 R powered by Vortex up to the very first positions.

Tony Kart stood out brilliantly in all the sessions, both with Simo Puhakka, rating leader, the fastest in Qualifying and winner of three heats, and with Marco Ardigò, who won two heats. After a difficult Qualifying, not in line with his potential, Matteo Viganò gained the victory in the Prefinal, taking the lead in the heats and taking a best lap too.

In the Final, Simo Puhakka was forced to withdraw in the early stages of the race due to a contact, but Ardigò scored a great performance and won the race. Viganò did also very well, finishing fourth after some very close duels. Alessio Piccini was the author of excellent performances in the decisive race recovering eight positions.

Noah Milell faced a bit of bad luck instead. Always in Top Ten of KZ2, the Swede didn’t qualify for the Final due to the brawl he was involved in at the start of the Prefinal. Also, David Vidales could hardly find the right constancy to express himself at top levels despite a best lap in the heats.

In the OK category, the OTK material brilliantly stood out, especially thanks to Dino Beganovic from the Ward Racing team, an absolute protagonist with three victories gained in the Prefinal and in the heats that took him to fourth place in the decisive race. Unfortunately, the good performances were not fully exploited by our official drivers in the Final: Matheus Morgatto was forced after a few laps to close a fantastic weekend due to a contact. Joseph Turney, always in the first four of the Heats and third in Prefinal, tried to recover after a bad lap but slipped out of the Top Ten. Also, Sebastian Montoya could not express his potential at his best after the ninth position conquered in Prefinal.

In OK-Junior, Nikita Bedrin took full advantage of the Third Round of the WSK Euro Series. The Russian reached the third place in the overall rating thanks to his final sixth place, the second in Prefinal and the three second places achieved in the heats. A little bit unluckier, Josep Maria Martì Sobrepera was eliminated by a contact in the early stages of the Final, making all his efforts and his great sixth place in Prefinal fruitless. Alex Dunne, in the Top Ten of the Heats and fourth in Pre-final, was also out of the post-race rating.

In 60 Mini, the Tony Kart Mini Rookie EV reached the second step of the podium thanks to the great performance of Manuel Scognamiglio from the Gamoto Team. Concerning the official Tony Kart drivers, Jules Caranta and Coskun Irfan did well with a second place for both besides a fifth place in Prefinal gained by the French driver. Very good also were Andreas Cardenas and Jimmy Helias who reached three times the Top Ten.

The Tony Kart Racing Team is now ready to take part in the Final Round of the WSK Euro Series. The fourth stage, awarding the OK, OKJ and 60 Mini titles, will be a night race and will take place on the Adria Karting Raceway, with the finals scheduled in the evening of Saturday, 29th of June.