185 participants from all over the world gathered in the Upper Palatine region last weekend to take part in the second competition of the 2019 German Kart Championship. The weather caused lots of excitement again and several surprises came out of the races. 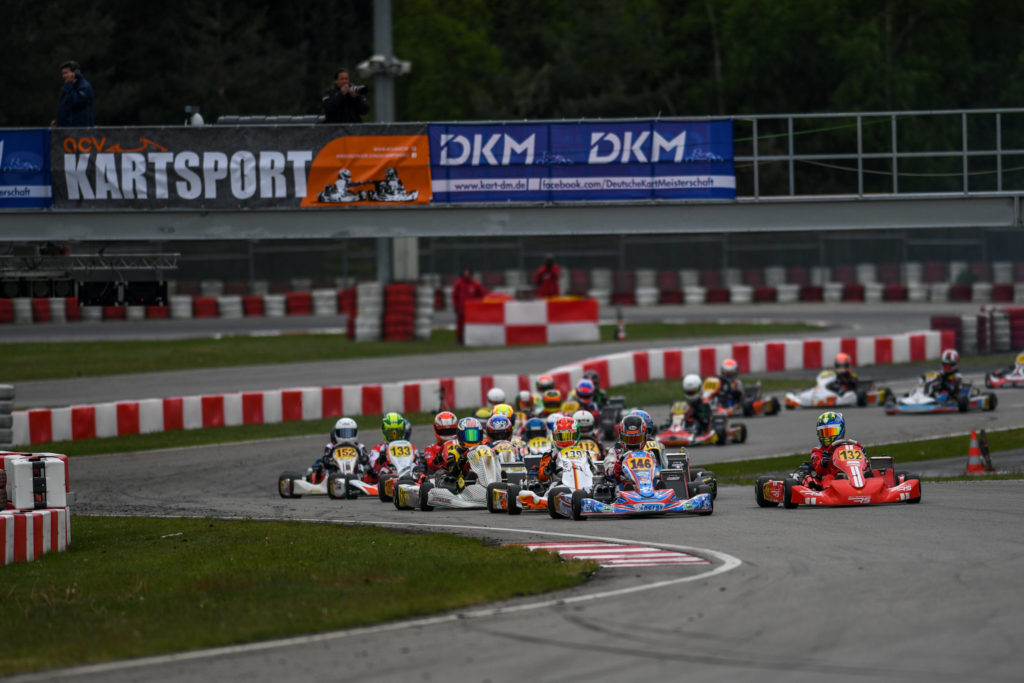 Four weeks after the season kick-off of the DKM Championship in Lonato (Italy), the next event of the German kart series took place on the Prokart Raceland of Wackersdorf, which provided a strong location for the 185 drivers from more than 25 nations competing in the five grade series DKM, DJKM, DSKM, DSKC, and DEKM.

The weather posed a special challenge again. During Saturday, it changed from sunshine to clouds and heavy rain. A situation that made the choice of tires very difficult and caused several surprises in the championships. On Sunday evening, the victories went to Hugo Sasse, Lorenzo Travisanutto (both DKM), Robert De Haan (DJKM), Riccardo Longhi, Stan Pex (both DSKM) and Senna Van Walstijn (DSKC).

The German Hugo Sasse (TB Racing Team) dominated the competition on Saturday. With Pole position and a victory in the heats, he started into the Finals as a big favorite. During the first race, the protégé of the ADAC Sports Foundation set the pace at the front of the field and could celebrate his first victory of the year. Behind him, Lorenzo Travisanutto (CV Performance Group) fought his way forward to second place. Behind the reigning World Champion, Miklas Basil Born (Innovate Competition), Aleksey Sizov (TB Racing Team) and Nico Hantke (3G Racing) completed the top five.

During a turbulent starting phase of the afternoon race, reigning Vice Champion Sasse missed out on the double victory. Due to technical difficulties, the German temporarily fell back to midfield and finally came in 11th. At the front of the field, Travisanutto showed a spotlessly clean performance and achieved his second victory of the season after Lonato. His pursuers Alexander Tauscher (Junior TEAM75) and Felix Arnold (TB Racing Team) stayed in his wind shadow the entire race but weren’t able to attack. Bastian Buus (RS Competition) and Sizov followed in fourth and fifth positions respectively. Ben Dörr (TB Racing Team) showed a strong catching-up race. After a falling out at the first race, he drove forward from the end of the field to seventh place.

The winner Travisanutto was satisfied with his debut in Wackersdorf: “With this victory, we were able to strengthen our leadership in the championship. We worked a lot these past few days. It was the first race on this track for me but I really liked it. It’s technically challenging and you have to achieve a good rhythm to be fast.”

Championship ranking DKM after 4 of 10 races:

Neo Ringdahl (Bamberger Kart Racing) achieved Pole position in the Juniors on a wet track. During the heats, the Swede wasn’t able to defend his position though and passed the lead on to overall leading driver Robert De Haan (Energy Corse). The Dutchman won both heats and was unstoppable during the final races on Sunday as well. He dominated the two races and strengthened his leading position in the championship. “I achieved a good lead both times and managed to keep it,” he said. “I’ve now strengthened my lead in the championship and am going to stay focused.”

Things on the further positions were varied. The youngsters showed exciting duels and switched positions numerous times during the course of the race. At the first Final, Luca Leistra (RS Schumacher Racing Team) led the field in front of Levente Revesz (KR Motorsport), Enzo Riccardo Scionti (WARD Racing) and German Jakob Bergmeister (Millenium Racing Team). The balance of power was similar during the second final race. This time, the Hungarian Revesz ended up in the second place. Leistra came in third, followed by Bergmeister and Mathias Bjerre Jakobsen (TK Racing).

Championship ranking DJKM after 4 of 10 races:

The 35 drivers of the German Shifterkart Championship showed world-class performances during the races. Benjamin Tornqvist Persson (CRG Holland) highlighted his love of wet track conditions once again – with a victory and a second place in the heats giving him the lead on Saturday evening. There was a change in the balance of power on the dry track during the final races though. Riccardo Longhi (BirelART Racing KSW) won the start and kept his top position until the end of the race. Behind him followed reigning champion Fabian Federer (SRP Racing Team) on second place. There was a close fight for the last place on the podium: At the end of the race, Emilien Denner (CPB Sport) prevailed over Stan Pex (SP MotorSport) and Tornqvist Persson.

There were several changes regarding the leading position during the second final race. From sixth starting position, Jeremy Iglesias (RS Schumacher Racing Team) raced to the front but wasn’t able to defend the top position until the end. Stan Pex fought his way forward towards the middle of the race and defended his position against Federer until the end of the race. Regarding the third place, Longhi managed another maneuver against Jorrit Pex (SP MotorSport) and the temporary leader Iglesias in the end. At the finish line, winner Stan Pex was really happy about his success: “I took the lead early on and then tried to stay calm. It’s really great to have won.”

Championship ranking DSKM after 4 of 10 races:

48 participants made a full field at the DMSB Shifterkart Cup again and there were several surprises during the course of the three racing days. During Qualifying and the heats, Rafael Villagomez (BirelART Racing KSW) from Mexico dominated the events and led the interim standings. But during the course of the Prefinals, he made way for his teammates Valentino Fritsch and Robert Kindervater. The two BirelART drivers each won a race and thereby started into the final from the first starting row. The three leading drivers of the championship had to deal with a setback. Tim Tröger (Mach1 Motorsport), Jeroen Bos (CRG Holland) and Davids Trefilovs (SRP Racing Team) had to drop out and thereby missed entering the Final.

In the race over 21 laps, local driver Fritsch achieved a perfect start. He drove away from his pursuers in the beginning and seemed to be on the way to his first victory. From behind, Senna Van Walstijn (SP MotorSport) raced to the front though. Shortly before the end, the Dutchman drove past the leading driver and celebrated his first DSKC-victory. “In the beginning, the race was really exhausting. I had to close a huge gap, but now I’m very happy to have won my first race as a rookie”, he summed up in his winner’s interview.

Behind him, there were several changes due to subsequent penalties. In the end, Konstantin Kapetanidis (Valier Motorsport) came in second in front of Fritsch, Valdemar Risom (RS Competition) and Jan Bednar (Gregor Kart S.R.O.).

Championship ranking DSKC after 4 of 10 races:

The German Electric Kart Championship had its season kick-off last weekend with 12 drivers starting in the globally unique kart racing series. On Saturday and Sunday, Qualifying, Prefinal and Final were on the program and the winners of the two racing days were Luca Wlömer (Berlin/GER) and Lin Chen Han (Taoyuan/TWN).

After the first two events, the German Kart Championship is now going to take a short break. In eight weeks (July 12th-14th), the half-time race will take place on the Erftlandring of Kerpen.