As a karting driver, you should know that putting back in place the front fairing of the kart following an incident to avoid penalty could result in disqualification. But, reading the rulebook to find out the exact words of the regulation, there seems to be a grey area that made us question about some specific cases. So, we asked the CIK Executive Secretary, M. Kay Oberheide for some clarification regarding this ruling which has been phrased after a fixing concept no longer applied. 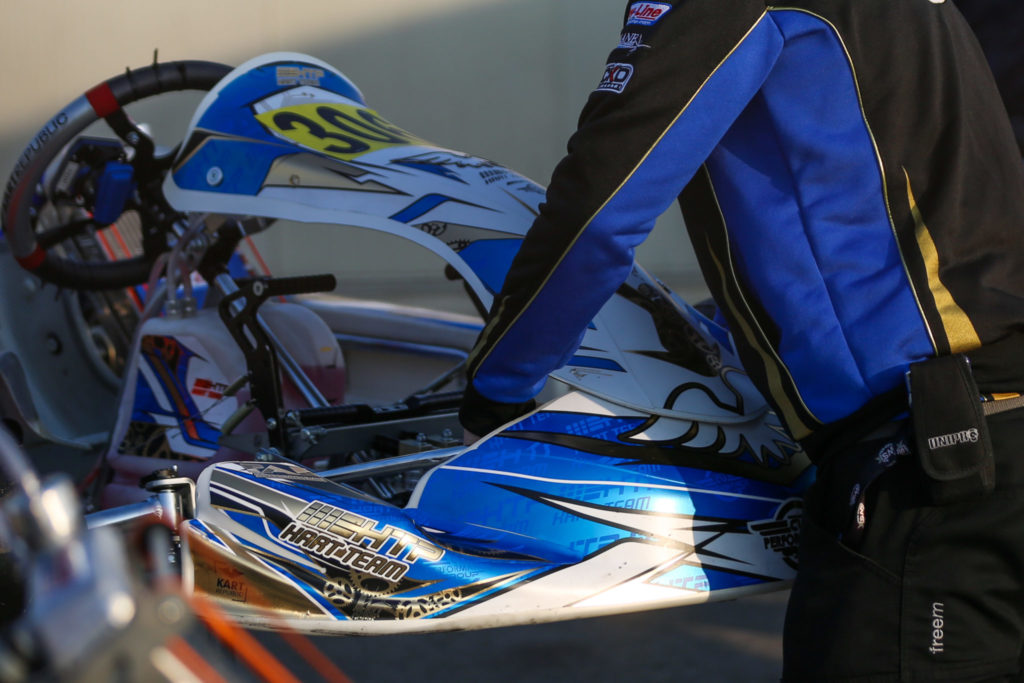 In preparation to this year’s FIA Karting Championship season, we ran through the General Technical and Sportive rulebook of the FIA Karting Commission in search of updates or changes. Our curiosity was caught by the 2.3.3 paragraph about the Front Fairing & Front Fairing Mounting Kit, especially that following part:

“Should a Driver or a third party be found/proved to have intentionally put back in place a front fairing that was not correctly positioned during the last lap or after the black and white chequered flag was waved, the Driver concerned will be disqualified from the Competition.”

This penalty rule was written down by the Commission a few years ago, at a time when the fixing system of the front fairing was different than it is now. Until 2014, the technical regulation stated that the bumper was to be attached to the chassis according to a “drop-down” system, as Mr. Kay Oberheide, CIK Executive Secretary, reminds us: “The reason why we tried the ‘drop-down’ option was for the Race Director to directly see an incorrect position of the front fairing and give the driver a technical flag. Each driver with a flag had to go or was forced to go to the technical area.”

“But, at that time, and it was our fault, we didn’t test it on the grass,” he continues. “Because in the case of a kart jumping more than 40-50 centimeters from the ground, the front fairing would drop under the chassis, meaning there was no more control by the driver. Therefore, we had to make a change and went for a different configuration.”

Since January 1st, 2015, the front fairing has been conceived and fixed to the chassis using a “push back” configuration which still can be displaced when a sufficiently-strong contact is made, as it’s often the case when drivers fight for positions during a karting competition. But, this time, the bumper misplaces in a way that it doesn’t go under the chassis with the risk of putting the driver in an uncomfortable, or even dangerous, situation.

While the fixing system evolved, the penalizing rule, apart from one or two words, kept a similar format in the sportive book as it was written before the change was decided. A situation that, to our interpretation, allows for two main loopholes.

First, the case of a driver stopping on the track or in the scrutineering area after the chequered flag was waved and trying to push back his/her bumper but doesn’t succeed.“The background of this penalizing system is that a driver, before the last lap, is in theory allowed to go into the repair area to replace it in the correct position with the help of his mechanic,” explains Mr. Oberheide. “But in the last lap, it’s no more allowed, which means that if he comes in the technical area and that the front fairing is in the non-correct position and he’s trying to put it back once again, this is completely unsportsmanlike from our point of view. Therefore, the penalty is disqualification from the event.”

Second, the case of a driver pushing a misplaced front fairing with his/her foot before the last lap or during a race stoppage. “This is a bit of a gray area,” confirms Mr. Oberheide. “Because, in the end, to prove that a driver didn’t succeed in putting the front fairing back in position, you need to have evidence and it’s a little bit difficult. So, therefore, it’s difficult to judge. So, if a driver is trying for five laps to push his front fairing back in the correct position, I am sure he will have a disadvantage because he has to do it with his foot. So the foot is no more on the pedals and it’s not so easy to do.”

“So I guess that the driver will not try this during racing because I have my doubts it’s possible. Perhaps he will try during the out lap after the chequered flag is shown but, in the meantime, we also have an additional camera directly on the start/finish line from top to down so we can see, when a driver has passed the flag, if the front fairing is in the correct or incorrect position. So, even though there might be parts to discuss here and there, in principle I think the rule is fine.”

“We know that this system cannot be 100% fair but my feeling is that in 90% of the cases of an incorrect front fairing position, this was the correct penalty. This is hard but the drivers are aware of it and if they take the risk, this is their own decision. In the past, it was a 10-second penalty for an incorrect position, now it’s five seconds since January 1st, 2019.

“As far as I heard inside the paddock where I speak with the teams and drivers, everybody is more or less happy with the system itself. From my point of view, it will never be perfect but if somebody explains us a better way and it makes an improvement, they are all welcomed.”

Thank you to Mr. Kay Oberheide, CIK Executive Secretary, for his time.