With temperatures much more comfortable on Thursday morning and winds dying down, the drivers participating in the 2019 “ROk The Rio” event by ROK Cup USA went through one round of practice before the ever-important OMP Pole Position qualifying sessions setting the grid order for the first of four heat races taking place on the temporary circuit on the grounds of the RIO All-Suite Hotel & Casino. 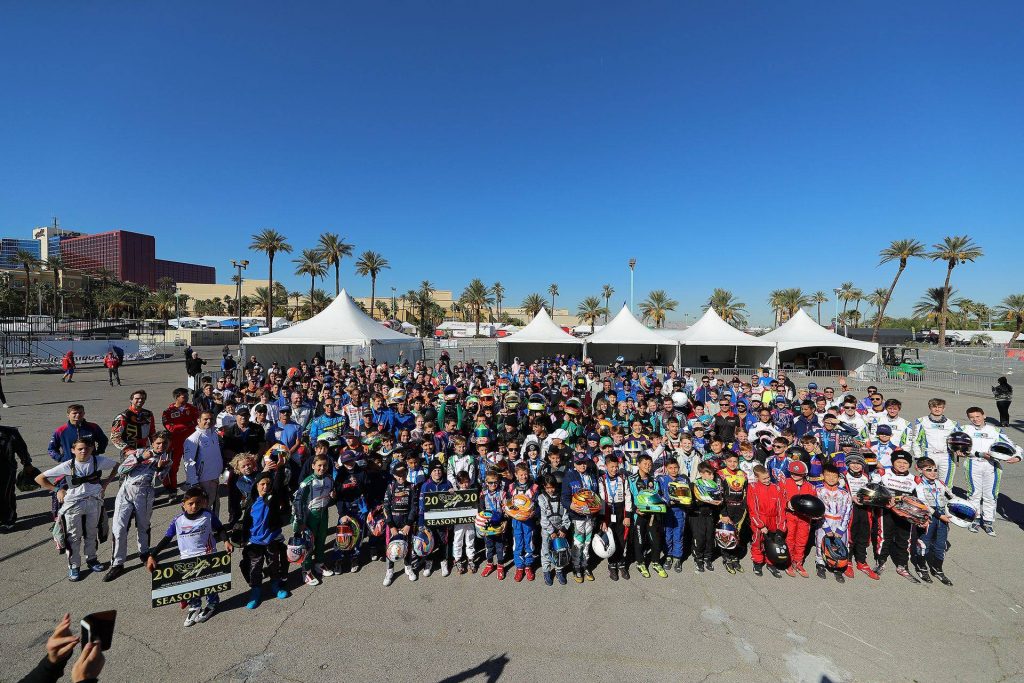 With Qualifying beginning at high noon (local time at Las Vegas, CET -8), each class had one session to put their best possible lap on the board to see if they could claim the quickest lap and lead the field to the green during the first of the four-heat race format.

Leading the way in the Senior 100cc division was CompKart driver Jake Drew. Completing a total of eight laps and scoring a time of 50.555, Drew took the OMP Pole Position Award by a scant .015 over Colby Dubato and Henry Falls-Hand. Austin Osborne set the pace early but ended his session in fourth with Billy Musgrave rounding out the top-five in fifth.

Taking the Mini ROK OMP Pole Position on track was Italian driver Riccardo Ianniello (NF Sports) with a quick lap of 54.187. Only completing six laps, as an incident late in the session damaged his NF Sports prepared machine, gave a chance to his competitors but his early session lap kept him on top. Florida Winter Tour Champion and ROK Fest winner Kai Sorensen led the rest of the 36-driver field as he and Supertune teammate Enzo Deligny were classified second and third. Xander Reed (Supertune) had a strong run to cross the stripe with the fourth quickest lap of the session while Cameron Weinberg rounded out the top-five.

Ryan Kinnear (Phil Giebler Racing) and Jordan Musser (PSL / 3G Kart Racing) ended the Masters Shifter ROK qualifying session with identical times but Kinnear was classified as the pole winner based on scoring his fastest lap earlier in the session. Taking the OMP Pole Position Award, Kinnear will start his first heat from the inside of the front row and on his outside will be Musser. Ryan Yop (Ron White Racing) finished just over a tenth in arrears of the front duo with Mike Beeny (M Squared Racing / Rolison Performance Group) and Kevin Woods (Ron White Racing) completing the top-five.

With two groups of qualifying in Senior ROK, 48 drivers battled for the top spot, but none were faster than PSL Karting’s Ben Cooper. Cooper managed to take the top spot by .013 to score the OMP Pole Position Award. Rolison Performance Group’s Ryan Norberg finished the session in second while PSL Karting’s Thomas Nepveu was third. Former IndyCar driver Zachary Claman secured the outside second-row starting position with Enzo Prando rounding out the top-five. Axle Cabrera was the fastest driver in the slower of the two groups and ended up slotting in tenth.

Syntech Racing’s Adam Maxwell took his Tony Kart to the pole position in the Junior 100cc class ahead of California’s Logan Toke as the duo will occupy the front row for the start of heat one. Danny Dyszelski slotted himself in P3 while Alex Berg finished only .266 behind the pole winner Maxwell. Female and Ocala Gran Prix driver Chloe Chambers, fresh off of her F1600 test, finished with the fifth quickest time of the session and looks forward to the four heat races coming up over the next two days.

Billy Cleavelin propelled his Rolison Performance Group entry to the top of the charts in Masters ROK with a quick time of 49.817 while teammate Scott Falcone pushed him all the way to the end posting a lap only .032 behind. ROK Superfinal podium winner Renato Jader-David (Orsolon) was less than a tenth behind the RPG duo in third while Brazilian standout Magno Gaia was fourth. Costa Rican pilot Andres Fonseca secured the fifth place starting spot for heat one.

Goodwood Kartways entrant and Canadian Jordan Dileo rocketed his way to the top of the time charts in Micro ROK and narrowly escaped the session with the OMP Pole Position Award. Finishing second, just .007 behind Dileo was AKT Racing’s Kai Johnson with Benik driver Enzo Vidmontiene in third. Luis Umana (AM Engines) and Carson Weinberg (Supertune) put five different teams in the top-five at the conclusion of Micro ROK qualifying.

ROK protagonist Jonathan Silva garnered the pole position in the Masters 100cc class as Canadian Rob Kozakowski will line up alongside him on the front row. Fellow Canuck Colby Wallace will start third finishing .346 behind Silva. Leading Edge Motorsports driver Tim Meyer put his #833 machine in P4 as Brazilian Leo Kosman rounded out the top-five with a fifth-place result.

Racing Edge Motorsports driver Guilherme Figueiredo put his Kosmic kart on the pole position in the talent-filled Junior ROK division taking home the OMP Pole Position Award. In a session that saw Figueiredo near the top of the charts all session long, the young gun secured the pole with a time of 48.757. Speed Concepts Racing driver and Florida Winter Tour Champion Luca Mars will line up P2 with NF Sports’ Enrico De Luca in third. Orsolon Motorsports drivers Joey Atanasio and Diego Contecha finished fifth and sixth respectively as the top-five were only separated by .341.

For the second year in a row, Leading Edge Motorsports driver Daniel Formal grabbed the Shifter ROK OMP Pole Position Award. Looking to end his Saturday one position higher than he did in 2019, Formal has set himself up nicely for the heat races. Newly named PSL Karting Team Driver Jake French claimed the second-fastest lap of the session while last year’s ROK the RIO champion Mathias Ramirez will start heat one from P3. The ever-popular Rubens Barrichello will roll off the grid in fourth with Vincenzo Sarracino in fifth. Utilizing the progressive heat race format, the first of four heat races for each class went green at 2:20 pm. In the ever-popular time-specific schedule, the last class hit the track at 4:31 pm to end an hour before sunset.

Jake Drew maintained his pole position at the conclusion of heat one taking the victory by .725 while Billy Musgrave advanced forward from his fifth-place starting spot to finish second. Jenson Altzman managed to make his way forward to finish third and secure the inside row two starting spot for the second heat of the event tomorrow morning. Henry Falls-Hand maintained his position in the top-five while Alex Siragusa crossed the stripe in fifth.

Off Pole sitter Kai Sorensen had a terrible opening lap and fell down the running order to close lap one in 29th. Pushing hard to salvage a result and a better starting spot for heat two, the multi-time champion managed to work his way back forward to tenth, but it was all Riccardo Ianniello upfront. Proving that his pole position was no fluke, Ianniello scored the heat race win by .313 over PSL Karting’s Caleb Gafrarar. Supertune’s Cameron Weinberg was able to maintain his position in the top-five with a third-place effort while Deligny fell back one position from where he qualified to fourth. Canadian Frankie Esposito rounded out the top-five and will start heat two tomorrow from inside row three.

Ryan Kinnear dominated the Masters Shifter ROK heat one leading flag to flag. Setting consistent laps, Kinnear stretched his gap over rivals and just put it on cruise control to the checkered flag. Taking the win by 1.381 over Jordan Musser, Musser led Mike Beeny to round out the top three. Ben Schermerhorn was able to make his way forward to fourth while Ryan Yop finished fifth, solidifying his top-five starting spot tomorrow.

Ben Cooper maintained his perfect day converting his pole position to a heat race win. Pushing his Birel to the limit at the front of the field, Cooper led Thomas Nepveu as the BirelART duo looked to be the karts to beat. Zachary Claman consistently worked his way forward and made a move on the final corner on the penultimate lap to P2. The move allowed Cooper to stretch a gap on the rest of the top-five. Claman led Diego Ramos (HR Racing), Nepveu and Ryan Norberg to the checkered flag. In a race that saw more penalties than average, Norberg was docked two positions for a driving infraction as Enzo Prando (NF Sports) was elevated to fifth.

Adam Maxwell was supposed to lead the Junior 100cc field to the green but after a few aborted starts, the front row was inverted with the third and fourth place drivers. When it was all said and done, Supertune’s Jorge Ortiz was able to garner the heat one victory as he outdueled Adam Maxwell to the end. Alex Berg was able to finish third with Danny Dyszelski holding on to fourth at the checkered flag. Cole Schroeder ended his first wheel-to-wheel action of the weekend in P5 as American drivers swept the top-five results.

Fresh off his ROK SuperFinal podium, Renato Jader-David drove his Orsolon Motorsports entry to the heat race win in Masters ROK. Outdragging Billy Cleavelin to the checkered flag to win by a mere .022, Magno Gaia was a distant third. Fonseca maintained his position in the top-five while Brazilian driver Danilo Ramalho worked his way forward to fifth.

Starting from the pole position, Goodwood Kartways Jordan Dileo was unable to maintain his qualifying pace as he fell back to fifth. Enzo Vidmontiene took advantage of the situation and secured the first Micro ROK win of the weekend as Kai Johnson finished second. Columbian Luis Umana drove his way to P3 while Venezuelan Salvador Dellaveccia finished fourth.

Formula Kartworks’ Jonathan Silva led the field to the green flag and maintained his position at the end of the race, but it was a battle. With three different drivers holding the point on occasion, Silva managed to move his way back to the front to score the win. Colby Wallace (Ruthless Karting) held of Leading Edge Motorsports driver Tim Meyer for the second position while Rob Kozakowski put a pair of Ruthless Karting team drivers in the top-five in fourth.

Setting fast time in qualifying and continuing that progress into the heats, Guilherme Figueiredo took the Junior ROK heat race win ahead Enrico De Luca, who made a last-lap pass on Luca Mars to advance forward one position. Jeremy Fletcher rocketed his way forward as the Floridian held off Diego Contecha for fourth.

Daniel Formal continued his Vegas perfection turning his OMP Pole position into a heat race win. Opening a gap early, Formal fell back into the clutches of Jake French and Mathias Ramirez but managed to hold the pair at bay. Ramirez slipped by French in the last few laps and mounted a charge on Formal but came up a lap short as the Leading Edge Motorsports driver held the GFC Karting competitor off until the checkered. Zachary Hollingshead (TB Kart USA) secured the fourth position on track while Karting Collective Nicholas Le ended his heat in fifth.

Friday sees thirty heat races as each driver will have three more chances to work their way forward in the progressive style heat format. Warm-up begins at 7:30 am with the second heat going green at 9:10 am.