The 2019 ROK Cup Promotions event calendar culminated in Las Vegas with the much anticipated #ROKtheRIO race. Taking place on a temporary circuit on the grounds of the RIO All-Suite Hotel & Casino over the week of Wednesday, October 30 to Saturday, November 2, drivers from around the world descended on America’s playground for the second annual event. Exceeding last year’s entry total by nearly 100 competitors, a jam-packed, yet team and driver-friendly schedule greeted the stacked fields of talented drivers over the four on track days. 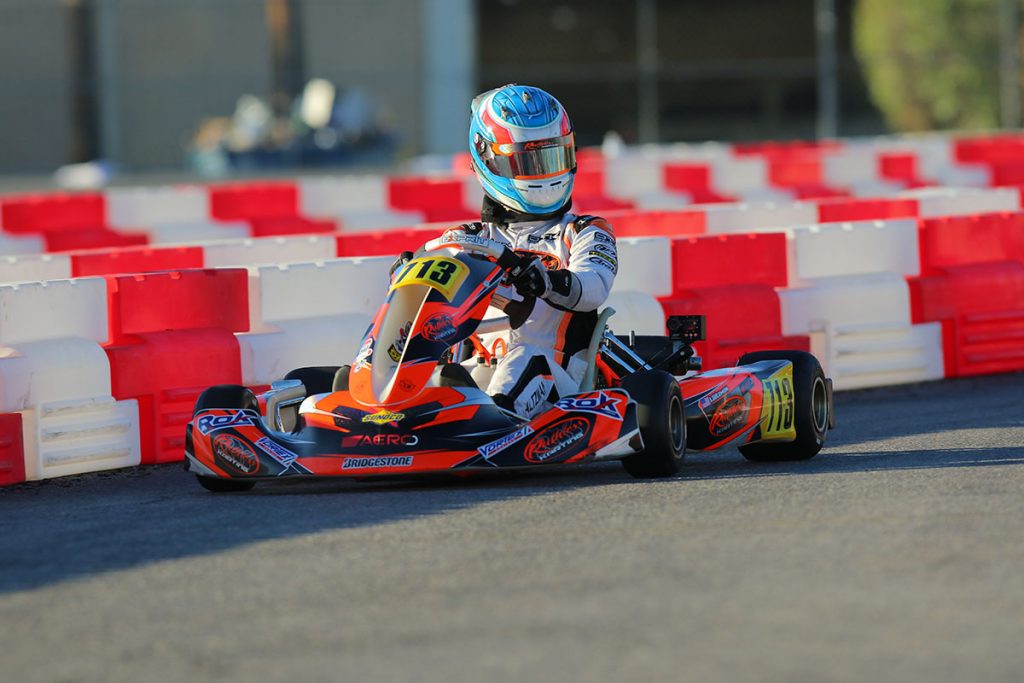 Saturday would see a split schedule with five classes completing their warmup and main events before the lunch break with the five others ending their weekend after.

Jenson Altzman made the move to take the win as he went from third to first in the latter stages of the race to be named the Senior 100cc ROK the RIO Champion. Capping off a consistent week of racing that saw him finish third, third, second and fourth in the heat races, Altzman outdueled OMP Pole Position winner Jake Drew and Billy Musgrave to take the win by .383. Austin Osborn moved his way to the top five after starting eighth to finish fourth while Henry Falls-Hand rounded out the top five.

It was a Kai Sorensen and a Caleb Gafrarar show in Supertune sponsored Mini ROK as the duo pulled away from their competition to make it a two-kart show. Sorensen led the majority of the 18-lap main event until Gafrarar made a move on the final lap to move to the point. Sorensen held his own and put on an over-under move to perfection in the final two corners to score the main event win adding to his multiple race wins and podiums in ROK competition in 2019. OMP Pole Position winner Riccardo Ianniello capped off his weekend with a podium finish in third while Sebastian Garzon and Anderson Leonard rounded out the top-five.

Ryan Kinnear capped off a perfect week in Las Vegas. Taking the OMP Pole Position, four heat race wins and main event victory, Kinnear was the driver to beat in the Masters Shifter ROK category. Rocketing off the line, Kinnear stretched his lead over Jordan Musser and Mike Beeny to take the checkered flag by 1.939. Beeny would be the best of the rest as he beat Musser to the line to stand on the podium in second while Musser came home third. Rod Clinard battled his way to a top-five result in fourth while and Kevin Woods fell from his third-place starting position to end his weekend in fifth.

It was an intense Senior ROK main event as Ben Cooper led early but fell into the clutches of a quartet of drivers. Ryan Norberg emerged as the leader and stretched the gap until lap traffic came into play, bringing Thomas Nepvue back to the rear bumper of the leader. Aggressively attacking to take the point, the two standouts made contact in the final complex of corners. Norberg defended down the front straight as the duo made contact into corner one and went hard into the wall opening the door for Diego Ramos. Ramos went on to take the win ahead of Cooper who passed Jacob Gulick on the start of the final lap. Zachary Claman charged forward and looked to have a chance at the win in the latter stages of the race but ended his weekend in fourth with Axel Cabrera in fifth.

Converting his main event pole position into a race win, Jorge Ortiz took advantage of some aggressive driving behind him to open a gap on his rivals. With some hard racing going on, Ortiz stretched his lead taking the checkered flag by 3.733 to be named the ROK the RIO Champion. Maximilian Opalski maintained his second-place starting position to finish second while Alex Berg rounded out the podium in third. Gaining six spots in the final was Chloe Chambers to finish fourth as Cole Schroeder rounded out the top-five.

Beginning his final from the outside of row five, Vatche Tatikian took advantage of some close, hard racing in Masters ROK to take the win. Beginning the final lap in a distant third, contact between the two leaders in the second to the last corner opened the door for Tatikian to take the lead and cruise to the finish line. The win looked as if it was going to go to either Scott Falcone or Renato Jader-David, but aggressive defending and with the shot at the championship, the two would make contact knocking Jader-David out of the race. Falcone would continue on and limp across the line for second while Danilo Ramalho rounded out the podium. Erik Jackson put himself in a position to score a top-five result as he and Eric Molinatti finished fourth and fifth respectively.

The 18-lap Micro ROK was led early by Kai Johnson as he was able to make his way to the point getting by polesitter Enzo Vidmontiene early. Looking to pull away from the field, disaster would strike for Vidmontiene as a broken chain on lap five took him out of the race and contention for the win. Luis Umana and Jordan Dileo took over the top two spots by the midway mark but could not hold on. Kai Johnson rose to the top and is your Micro ROK Champion just ahead of Carson Weinberg in a drag race to the line. Oliver Wheldon put the Wheldon name on the podium in Las Vegas just ahead of OMP Pole Position Award winner Jordan Dileo and Graham Trammell.

It was Leading Edge Motorsports driver Tim Meyer who saved his best drive of the weekend for Championship Saturday. Driving his way forward from P3 to the top step of the podium, Meyer bested Colby Wallace by .260. Rob Kozakowski also gained two positions in the main event to finish third and put a pair of Ruthless Karting drivers on the podium. two-time OMP Pole Position Award winner Jonathan Silva dropped three positions narrowly missing the podium in fourth while Ricardo Arruda ended his ROK the RIO event in fifth.

Enrico De Luca saved the best race to take his first win of the weekend as he claimed the Junior ROK ROK the RIO Championship. Going second, second, fourth and third in the heats, De Luca beat Luca Mars in another drag race finish to claim the title. Connor Zilisch rebounded from his 17th place qualifying effort to smartly drive his way through the heat races and on to the podium in the main event. Alessandro De Tullio gained one position in the final to finish fourth just ahead of OMP Pole Position Award winner Guilherme Figueiredo.

A multi-kart crash at the start of the Shifter ROK main event took out the likes of Davide Greco, Jake French, Ron White, Paolo Castagnetto and Enzo Prevost as Mathias Ramirez got away clean. Holding the point for the first few circuits, Ramirez was passed by two-time OMP Pole Position Award winner Daniel Formal as the duo would wage battle yet again, similar to 2018. This time Formal would reign supreme turning his pole position from Thursday into the main event victory. Ramirez, who bent his axle early in the run, was on the point until Formal broke through on the penultimate lap for the win. Nicholas Le, Race Liberante and Kyle Wick ended their ROK the RIO in third, fourth and fifth.