Jace concluded his 2019 season last weekend with the 23rd edition of the SuperNationals held on the parking lot of the Rio All-Suite Hotel and Casino, in Las Vegas. Entered in X30 Senior with Ryan Perry Motorsport, the young American showed improving pace and determination on track but the end result didn’t meet his initial ambitions for his sixth appearance in the Superkarts! USA highlight event of the year. 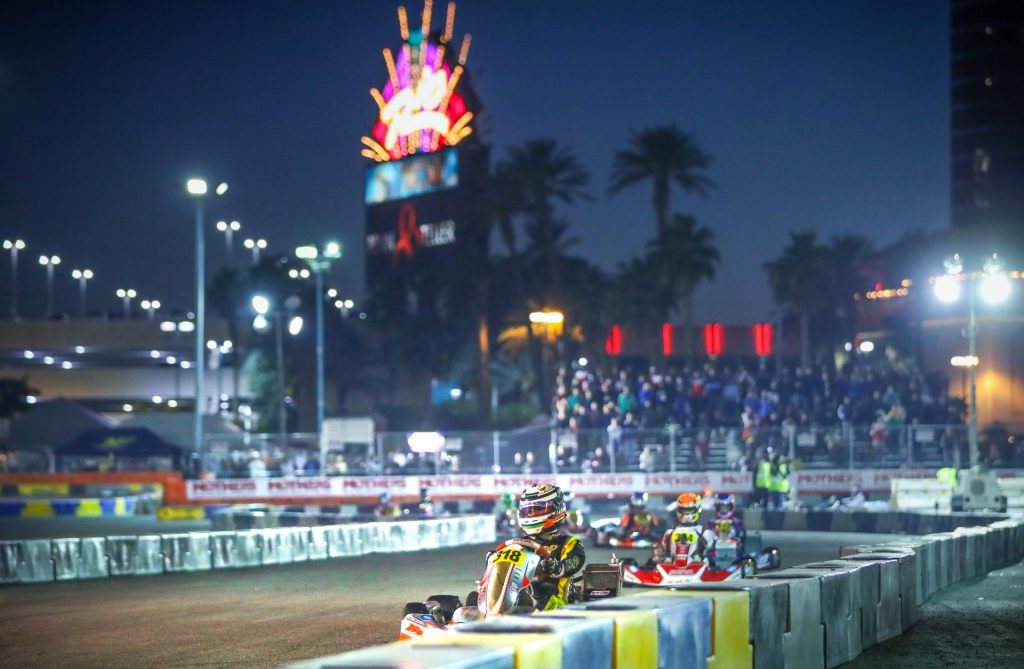 2019 came to a close for the American driver who entered last weekend’s SuperNationals with high ambitions on what he could achieve in a meeting where he’s been competing in five of the last six editions. Ryan Perry Motorsport, the team that he’s been racing with on home soil for the last three years, provided him again with a professional environment and workforce to tackle the almost week-long competition in the best conditions. Preparation had already begun prior to the SuperNationals with two days of testing during which Jace had shown speed confidence, putting lap times amongst the fastest of the category.

Once in Las Vegas, the official free practice sessions kicked off on Wednesday with the 80 drivers of the X30 Senior field taking to the track to set up both their chassis and engine while getting more at ease with the 0.6-mile temporary layout. On top of the opening session, Jace kept improving his performance through his next five free practices, working hard to find the most comfortable set-up ahead of qualifying. Against the stopwatch, his fastest lap put him just outside the top 20 in the first part of the session, missing the next step for a tiny gap of 0.018 seconds.

His first qualifying heats took place on Friday. From the eighth row on the grid, the Phoenix-born driver took a strong start while resisting the early attacks from some of his rivals going wheel-to-wheel in the opening corners. He kept a good pace until halfway through the race where a mechanical issue forced him to retire. Eager to make up for the bad luck, he entered his second heat as efficiently as the first one, quickly overtaking rivals on his way to a potential ninth place. The race was then interrupted with the yellow flag, which brought the field back together leading to a tight run to the checkered flag where Jace lost a bit of ground down to 13th place.

His third and last heat race on Saturday saw him reach the 12th rank after another strong drive in the midfield. Having retired in his opening race, he had to go through the LCQ stage with the goal to finish in the top six for a ticket in the Senior Final. Determined as ever, he delivered his best performance of the week by climbing up to a strong fourth place at the finish line before a penalty sent him back to seventh, putting an end to his qualifying hopes for the main event.

“This year’s SuperNationals finished early for me, that’s a shame. Despite the good speed we had, the field was so close that my qualifying lap only put me in 34th place. I made good progress in each heat but a DNF in one of the races meant that I had to fight for my place in the main event through a top-6 finish in the LCQ. I did indeed finish fourth on the track. However, a post-race penalty put me just outside the main event qualifiers by one place and that meant the end of our weekend in Las Vegas. Now looking forward to a strong comeback soon”, said Jace after the event.