Castelletto di Branduzzo rumbled one last time this weekend as the Prefinals and Finals unfolded this Sunday. Despite some early rain, the 7 Laghi Circuit remained mostly dry to conclude the Second Round of the 2019 IAME X30 Euro Series. Three new names stepped on the highest spot of the podium with Tom Lebbon taking the win in the Juniors while Lorenzo Travisanutto, in the Seniors, and William Macintyre, in the Minis, won for their first appearance in this year’s Euro Series season. 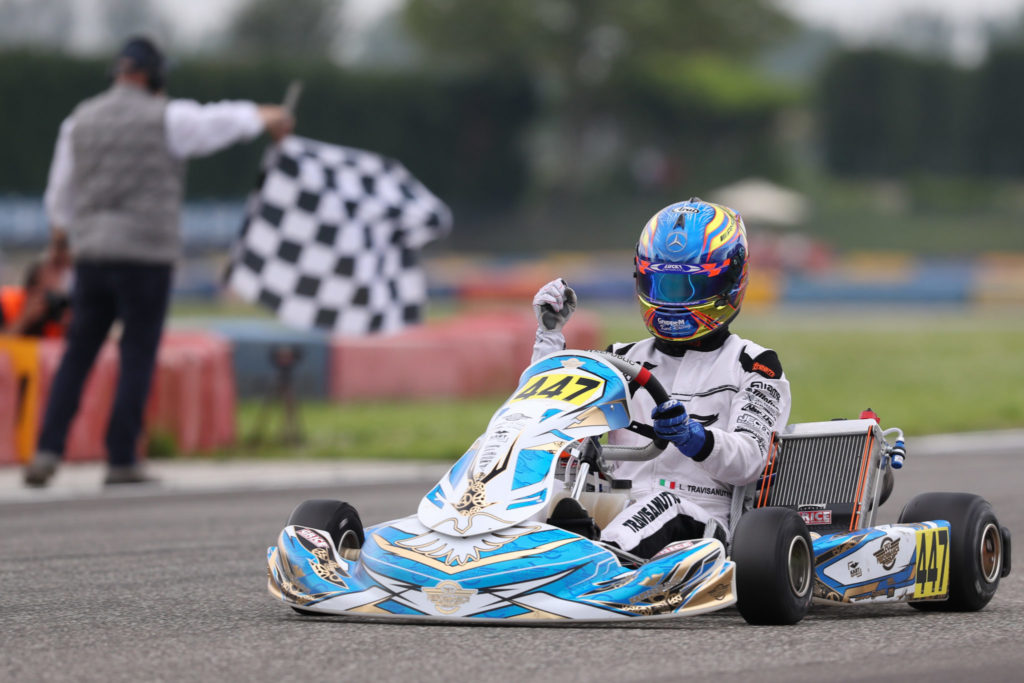 After missing a potential Pole position yesterday due to tricky track conditions in his last heat, Lorenzo Travisanutto (CV Performance Group) had his revenge this Sunday on the 7 Laghi Circuit. Winner of the Prefinal in the morning, the Italian clinched the victory for his maiden season appearance in the IAME X30 Euro Series. Despite a 1.7 second-margin at the flag over the Dutchman Joey Van Splunteren (Team Evolution), the final race of the Senior class was no walk in the park for Travisanutto who had to recover from a contact with Callum Bradshaw (Fusion Motorsport) in the opening laps after the British driver has escaped first at lights out taking the Spaniard Mari Boya (Monlau Competicion) with him. Elie Goldstein (VDK Racing) also had a strong start from 8th on the grid and even took the lead until lap 6 when Travisanutto charged back after falling down to 4th place while Bradshaw had tumbled down to 8th.

The second part of the 19-lap final saw Travisanutto build on his gap to cross the line in front of Van Splunteren, Harry Thompson (Fusion Motorsport), and Callum Bradshaw who was later penalized with five seconds (8th overall) like his countryman Morgan Porter (MSport) who went from 7th to 10th position. Jordan Brown-Nutley (Strawberry Racing) climbed up a rank to fourth ahead of Boya. After a good first part of the race, Goldstein lost some ground to conclude his weekend in sixth place, followed by the reigning Euro Series winner Mark Kimber (Strawberry Racing), Bradshaw, Lewis Gilbert (Persistence), and Porter.

“It’s the fourth win in a row for us, it’s been a tough month but definitely satisfying,” said Travisanutto on the podium. “The material is working very well, we’re doing an amazing job. I’d like to thank IAME, HTP and the KR Group for the work they’ve done.”

In the points standings halfway through the 2019 Euro Series season, Callum Bradshaw is leading with 165 points, six more than Joey Van Splunteren (159) with Mark Kimber following in third (150).

As in the Senior category, British drivers distinguished themselves in the Junior Final with Tom Lebbon (MLR) claiming the overall victory in front of Oliver Bearman (KR Sport). Leader of the provisional classification on Saturday night, the KR Sport driver had lost ground in the morning Prefinal but recovered in the Final from P5 on the grid to climb on his second consecutive podium in two Euro Series events. Third at the flag was Joshua Rowledge (Strawberry Racing) ahead of Oliver Gray (DHR) who heroicly made up 30 positions from the back of the grid to miss out the podium for 0.7 seconds! Crossing the line in 5th and 6th positions respectively, Joseph Taylor (Strawberry Racing) and the Polesitter Oli Pylka (DHR) both faced time penalties for an incorrect position of their front fairing. Alfie Rigby (KR Sport) was therefore promoted to 5th place with Alex Ley (Coles Racing) coming in 6th, followed by Ruben Volt (DHR), Alessandro Cenedese (Team Driver Racing Kart), Marcus Luzio (DHR) and Jason Leung (KR Sport), the latter two having recovered a good pile of positions.

“It was a tough race,” said Lebbon. “At the start, I dropped to third. Then, later in the race I past Oli Pylka at the right time, got a gap, then they caught me eventually but I defended again, got another gap and led to the finish.”

After two completed rounds, Oliver Bearman is holding the lead in the points standings with 166 units, 21 more than Joseph Taylor and 26 over Jason Leung.

Already leading the points on Saturday with three heat wins, William Macintyre (Team Driver Racing Kart) added another success to his tally in a wet Prefinal before dominating the last race of the weekend in the Mini class. Behind him, the battle for the remaining podium spots raged during some thrilling closing laps! Manuel Scognamiglio (Gamoto SNC) managed to get ahead his rivals, crossing the finish line less than half a second from Sebastiano Pavan (Team Driver Racing Kart), who had recovered from 11th on the grid, and Freddie Slater (Fusion Motorsport).

“It was quite tough at first but once we knew how to do the start and how to drive one at home, we just pulled away,” Macintyre explained after the race. “So it was hard but we managed to get there in the end. We just need to keep doing what we’re doing. Obviously, in Qualifying, we poled it and we were on our own, so we just needed to do the same again on track.”

The next round of the 2019 IAME X30 Euro Series will take place on the Pro Kart Raceland of Wackersdorf, Germany, from July 25th to 28th.