The 7 Laghi circuit barely had not time for break as 25 Qualifying Heats kept teams, drivers, officials and fans focused this Saturday in Castelletto di Branduzzo. If most of the races were run in sunny conditions, torrential rain came spicing up the debates in the last two heats of the Senior class. Once calculations were made, William Macintyre kept the lead amongst the Minis, Oliver Bearman took things in charge in the Juniors while Clayton Ravenscroft ended up leading the Senior field. 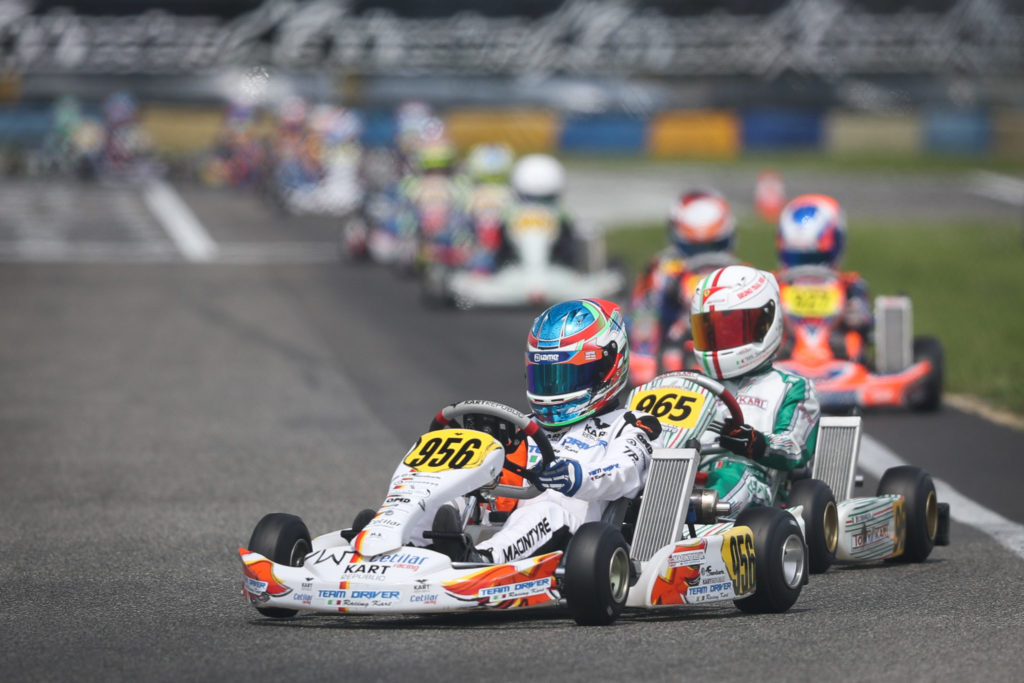 In the Juniors, Oliver Bearman (KR Sport) made the most of his Kart Republic chassis to sit in the leader’s chair. The Brit finished third in his opening heat before taking victory in the next two. His countryman Joseph Taylor (Strawberry Racing) took an early win from Pole followed by two top 3-results that placed him second in the provisional rankings. Another British driver, Tom Lebbon (MRL), sealed the overall top three with one heat win and will share the second row of the Prefinal grid with Miguel Luzarraga (FA Racing Spain). Oliver Gray concluded his Saturday in fifth position followed by Alessandro Cenedese (Team Driver Racing Kart) and Joshua Rowledge (Strawberry Racing), both winners of one qualifying race. Oli Pylka (DHR) was classified eight ahead of Kris Haanen (Coles Racing) and Jason Leung (KR Sport). Despite a second-fastest qualifying lap, Mateo Luengo (Piers Sexton Racing) couldn’t translate his Friday performance into expected results and ended up 14th overall.

Clayton Ravenscroft (KR Sport) emerged as the man to beat in the 80 driver-packed Senior class. Thanks to two victories completed with two-second places, the British driver led the provisional classification on Saturday for a single point ahead of Edoardo Villa (TBKart). The Friday Polesitter also went through a strong day performance-wise with two wins and two top-three finishes. Third in the rankings was Mari Boya (Monlau Competicion) on equal points (12) with Nicolas Picot (NPS), both having taken one heat win, followed by Harry Thompson (Fusion Motorsport), also victorious in one heat, and Lorenzo Travisanutto (CV Performance Group). With two victories, the Italian was eyeing the top seat in the points before rain showers in his last race proved to be more costly than rewarding (11th). Jordan Brown-Nutley (Strawberry Racing), Sam Balota (Eurokarting), Leonardo Caglioni (Team Driver Racing Kart) and Ruben Moya (Piers Sexton Racing) were the other drivers completing the top 10.

In each category, 28 drivers qualified for the Prefinal races. As stated by the rulebook of the IAME X30 Euro Series, the last six spots available on each grid will be disputed in the Second Chance Heats taking place tomorrow morning prior to the Prefinals.

Follow the Final day of the Second Round of the IAME X30 Euro Series by RGMMC on The Racebox website providing you with daily reports, pictures and results live from Castelletto di Branduzzo!