Less than three years ago, Emilien Denner had never driven a go-kart. Basketball rather than racing was on his mind until that Summer day of 2016 and a revealing first taste behind the wheel on a little karting track in Germany. Since then, the young Frenchman’s life completely changed as he went from being a complete unknown to become France’s new karting sensation in just two and a half seasons! Here’s the story of Emilien Denner’s meteoric rise in the wake of his recent KZ2 victory at the FIA Karting World Championship of Lonato! 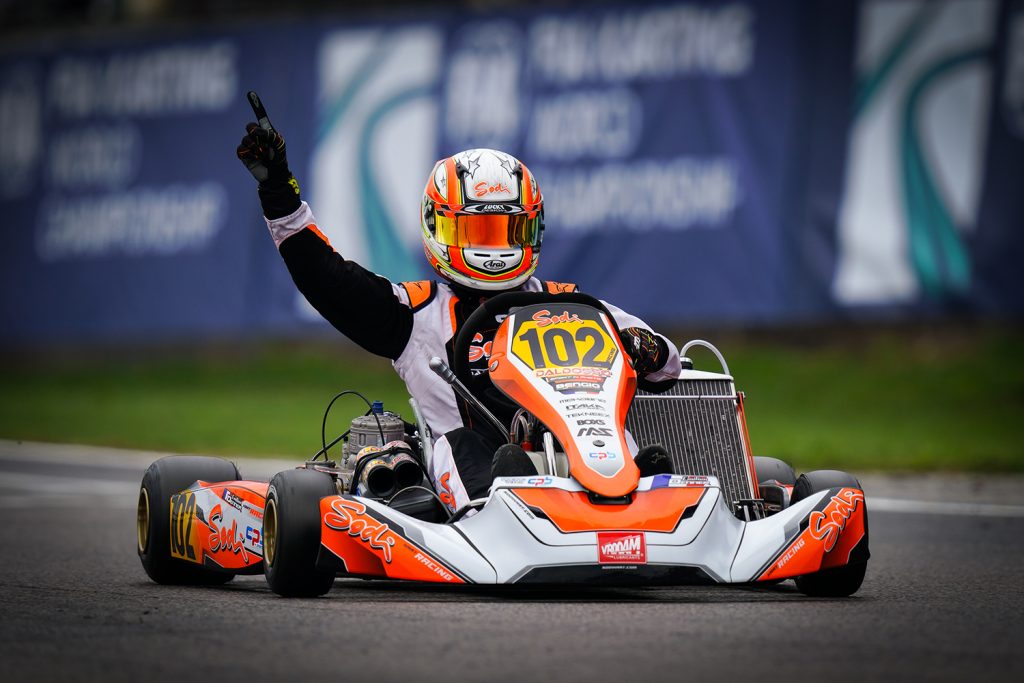 A few days passed since his victory at South Garda, in the heart of Italian Lombardy, and the pressure has dropped a notch on Emilien Denner’s shoulders, although the scope of his achievement against the 126 of the best KZ2 drivers in the world still seems to resonate in a corner of his head. It is in a rather serene mood that he looks back on a weekend where everything unfolded at a crazy speed, just like his path in karting so far.

“I still have a hard time believing it totally,” he says. “The weekend went very well even though the pressure was much present. It was the race of the year and since we had been very competitive all season, we had to win it. It started great with Pole position and then confidence kept growing as I won heat after heat, but the hardest thing was to finish in the Finale where anything could happen, especially since there was a risk of rain.”

“We were actually not as comfortable in the Final as in the heats because of a small set-up error,” he reveals. “We had changed the sprocket ratio and the engine was running at low speed in most corners, so the kart tended to slide and I had less throttle on exits.”

A small handicap that didn’t prevent him from keeping his head down in the most important race of the year against strong opposition. “I had a good start and my first lap went just as well, then Emil [Skaras, ed.] passed me. Luckily, I could re-take the position, otherwise, that race would have been quite different. Once ahead, I managed to keep my rivals at bay, first Tormen then Vidalès who was very fast in the closing stages of the race but too far back to attack me. After all the work we’ve done this season, achieving a win like this is something very special.”

“Special”, “stratospheric”, “extraterrestrial”, “hallucinating”: Eric Denner runs out of superlatives to qualify the performance of his son. The 25 laps of the KZ2 Final must have felt like an eternity for him, staring at this No. 102 Sodikart / CPB Sport-colored kart topping this furious field of 33 finalists waiting for any mistake. Then came the deliverance when he crossed the checkered flag, his forefinger pointing to the sky as a ‘thank you’ to the Gods of racing for this long-awaited gift.

“His win released lots of pressure from the shoulders”, says Eric. “There are almost no words to describe that. Knowing all the sacrifices and difficulties we’ve been through, achieving such a performance is a dream coming true. We were also granted with a big surprise when 200 people gathered in front of our Town Hall to welcome back Emilien. It was honking all over the place, just amazing!”

From basketball to the track

If Emilien is the one logically catching everyone’s attention, his outbreak on the international scene is also partly due to his father pulling the strings on the sidelines. At once protector and confidant but also manager, adviser and first ally, Eric Denner doesn’t count the hours of hard work to enable his son to fulfill his dream. Born in a family passioned by cars and competition, this Strasbourgeois climbed the entrepreneurship ladder in the early 2000s when he specialized in the manufacturing of compounds for the aeronautic industry. Fascinated by Formula 1, he soon transmitted his love for the Scuderia Ferrari to his son who at an early age only had eyes for the great Michael Schumacher.

In 2015, however, Eric Denner decided to reinvent himself by taking over the management of a karting track located in Germany, an hour away from their home in Strasbourg. “I decided to take this circuit that could host both rental and competition karting,” he explains. “Emilien was 13 years old at the time but was rather interested in playing basketball than doing motorsport. That’s the way it was in our village: either you went for football or basketball, and he chose the second option from the age of five until he was sufficiently good to play in the French championship before being selected by a detection program to start a sport-studies course.”

“At the same time, I started managing this karting circuit. Customers were coming aplenty and everything was fine. In August 2016, Emilien was on holiday and, like many teens, spent his days locked in his room playing video games. Me, I was working 24/7, seven days a week, and to see him doing nothing, it just made us angry. So, we decided with my wife that he would go to work with me on the track. Of course, that’s something he didn’t like at all but there wasn’t much of a choice.”

“In the beginning, the motivation was nowhere,” Eric continues. “He did all kinds of small tasks and every night I tried to encourage him to do some laps on track. It went like this for three weeks. But at the end of August, a young German guy came along with his father. He and Emilien got along well and he asked me if they could do a few laps together… and that was a true revelation! I had never seen this before. In just a few laps, he had already understood everything: the pedal synchronization, the steering wheel, the fineness of the lines… while he had never driven in his life!”

“On that same day, he told me that he wanted to drop basketball and do go-karting. So, I agreed on the condition that he would continue his studies with the possibility for him to drive on Wednesday afternoons and weekends. I made him a Rotax MAX which he used for three weeks, breaking the track’s lap record for the first time in years! That’s when I realized that Emilien had real natural skills and I made the decision to dedicate all my time and energy to him. Little to say that such a decision didn’t go down very well with my wife and family. There was also a money problem but it didn’t stop me. I would rather die with regret than with remorse.”

“After the Rotax, Emilien only wanted to do one thing: KZ. I tried to convince him otherwise and to go through the basics with a normal kart and no gearbox. Because doing rounds on your own on a circuit is one thing, but to manage all the physical, mental, strategic and technical constraints of a race against other drivers is quite something else. But it was pointless. All he wanted to do was KZ.”

It all started in March 2017 when Emilien made his KZ2 debut in the German ACV Kart Nationals competition, the equivalent of a second division behind the DKM national championship. A successful start since he finished the year as “best rookie” with the Vice-champion title in the pocket only aged 15. “I had warned him that he would face not only older but mostly much more experienced drivers,” Eric remembers. “Even if he was two seconds slower every lap, he was to do pull up his sleeves and go all the way to the season end. Then it all went very fast. His title caught the attention of many including the CRG factory and they offered him a paying contract with a TM engine and a Kali kart chassis for 2018.”

At the wheel of his new tool, Emilien lost little time and won the Second KZ2 Round of the FIA ​​Karting European Championship in Lonato. A strong result that granted him with the third step of the podium in the class standings. Second in the Italian WSK Final Cup, he also dominated the German Karting Championship (DSKC) with seven wins out of ten races.

An international outbreak that prompted the Frenchman Paul Bizalion, the boss of the CPB Sport Team in partnership with the Sodikart factory, to recruit him for 2019. Within this new professional structure constantly fighting for success, the Strasbourgeois kept his momentum going while stepping to a new level. “I almost lack comments to describe his season: 17 races, 12 podiums including six wins and eight best laps in Finals,” Eric exults. “He won the last KZ2 round of the European Championship in Sarno, finished Vice-Champion and won the KZ2 World Final in Lonato.”

“I’ve been talking to several team bosses who admitted that they can hardly explain how a driver as young as Emilien, who doesn’t even have three seasons of experience, can reach such level so quickly,” explains Eric. “Especially without going through the basics of a Baby, Junior or OK class, his ease to adapt and his natural speed leave everyone speechless. It’s almost extra-terrestrial.”

Witnessing such a fast progression, a question naturally arises: what’s the next step? “Before the World Championship, I already had offers from everywhere but now it’s even worse!”, laughs Emilien. “I have some interest from car racing, GT and also karting. We’re not in a decision rush but the goal is to go to single-seater, probably in Germany or Italy because it is where I can learn the most.”

If some testing in a single-seater might be on the map, it wouldn’t be the Frenchman’s first attempt. Back in 2018, he already had the opportunity to sit in an F4 car of Van Amersfoort Racing, the team that had run, among others, a certain Max Verstappen in European F3. “The tests took place at Spa-Francorchamps and at the Nürburgring,” recalls Eric. “From the very beginning, the level of performance was exceptional. After a few sessions, he was already a couple of tenths off the team’s time reference. They wanted to offer him a contract but it was a little early at the time because I didn’t have the partners I needed to build the project.”

But that story is already far behind. “It’s true that winning this title in KZ2 really accelerated things around Emilien and increased interest,” confirms Eric. “He has a lot more solicitations from the media, local personalities, etc. That’s the good side of this kind of victory but the most important thing is to also have investors and sponsors showing up. With a title like that, there’s no need to prove more.”

“The ultimate objective is Formula 1. At this stage, it’s a bit premature to say more but we are in contact with several structures involved in F3 and F2 whose connections go very far. We will take our time to analyze all these options in order to make the best decision…”

In the meantime, the aspiring champion won’t twiddle his thumbs. “I will still be on track for the last competitions of the WSK season [Open Cup and Final Cup, ed.], also at a Trophy in Lonato, at the last round of the DKM and at the SKUSA SuperNationals in Las Vegas. It will be the first time for me, so I will compete there to enjoy myself but also to win. From now on, it’s a bit of a bonus”, concludes Emilien.