In Lonato, Saturday 21st September was dedicated to the Qualifying Heats. This essential phase of the karting Competition enables the selection of the 34 finalists in each category who will compete for the titles on Sunday afternoon. In sunny weather, the FIA ​​Karting World Championship – KZ, the FIA ​​Karting International Super Cup – KZ2, the third FIA Karting Academy Trophy Competition and the FIA ​​Karting Historic Super Cup put on a superb show for the many spectators around the South Garda Karting circuit. 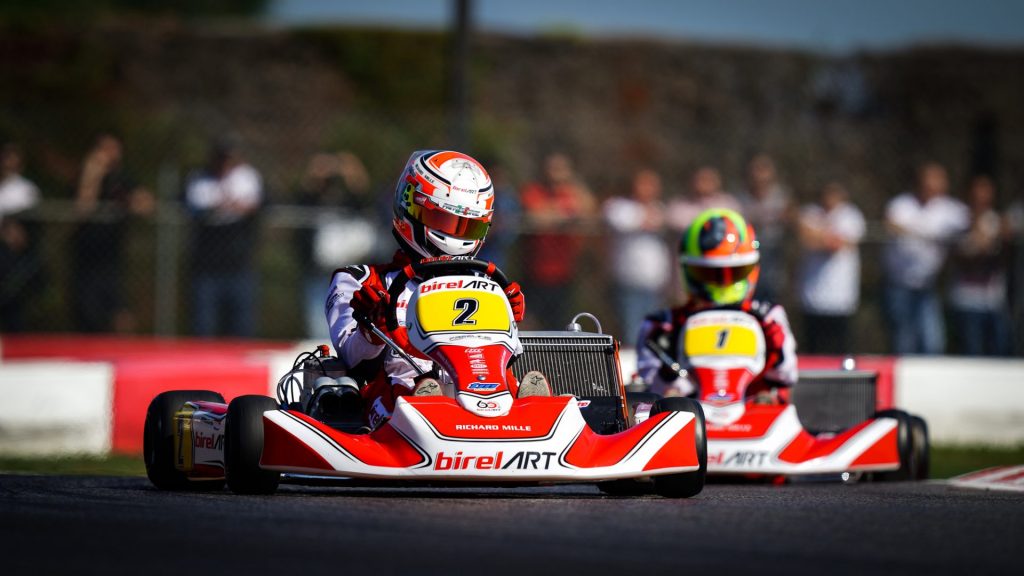 25 starts were given on Saturday and the battles were very close on the 1200m of the Lonato circuit. In good weather, very mild for the season, the grip on the track was gradually increased by successive groups of karts causing the accumulation of rubber, which is quite common in the Italian climate. The competitors tested themselves with passion, although they were relatively careful. Everyone kept in mind the stakes of the races and tried to avoid adding to their score by making mistakes or not reaching the finish.

The Competition is far from over and many changes may still occur, but Drivers who have retired at least once have already decimated their chances of winning. Eight Qualifying Heats, two in KZ and Academy, and four in KZ2, are scheduled for Sunday morning before the names of the 34 finalists who will participate in the fight for the titles in the afternoon are revealed. For Sunday, the weather forecasts are unanimous in predicting rain showers, probably moderate but still able to complicate the progress of the races and cause upsets.

Kajus Siksnelis (LTU) and Christian Ho (SGP), respectively ranked 1st and 2nd in Qualifying, shared the victories, two each, in the four Qualifying Heats of the FIA ​​Karting Academy Trophy. Robert De Haan (NLD) took 2nd place each time and moved up to 3rd place, followed by Elliott Vayron (FRA), very consistently at the front. Maxwell Dodds (GBR) conceded a few points while David Zachary (PHL) took a slight advantage over Filip Jenic (SRB). Jacob Douglas (NZL) dropped out of the top 10 after a poor first heat but was ahead of Paolo Ferrari (ITA). Also involved in the title fight, Joshua Coertze (ZAF) and even more so Oleksander Partyshev (UKR) were not in a very favorable situation.

Kremers takes the lead in KZ

The FIA ​​Karting World Championship – KZ kept its promises with regard to the intensity of the sporting clash. Marijn Kremers (Birel ART/TM) made a name for himself by winning his two Qualifying Heats. Behind him, Matteo Vigano (Tony Kart/Vortex) had a victory to his credit, while the poleman Adrien Renaudin (Sodikart/TM), also a winner of a Heat had a slight advantage against Simo Puhakka (Tony Kart/Vortex) and Alessandro Irlando (Birel ART/TM). Riccardo Longhi (Birel ART/TM) and Stan Pex (KR/TM) then followed with very good pace.

Denner remains the master in KZ2

The poleman of the FIA ​​Karting International Super Cup – KZ2, Emilien Denner (Sodikart/TM), managed a clear round in the Qualifying Heats as he has so far taken five victories in five races. David Vidales Ajenjo (Tony Kart/Vortex) made good progress with his three wins, while Danilo Albanese () joined a chasing pack along with Giacomo Pollini (Formula K/TM) and Emil Skaras (Energy Corse/TM). Michele Fontana (CKR/TM) continued to score among the specialists of KZ2 along with Marco Tormen (Praga/TM), Alessio Piccini (Tony Kart/Vortex) performing very well and Natalia Balbo (Formula K/TM) confirmed her particularly stylish sense of attack. Among the drivers who were severely delayed in one of their heats, Davids Trefilovs (Maranello/TM), Filippo Berto (Birel ART/TM), Jean Nomblot (Sodikart/TM) and Massimo Dante (Maranello/TM) had to let their illusions slip but will continue to fight to get into the Final.

The Historic Super Cup takes to the track

After having carefully prepared their superb machines under a large marquee at the entrance to the paddock, participants in the FIA ​​Karting Historical Super Cup took part in their first two demonstrations on the track. Under bright sunshine, karts illustrating the history of karting since its origins in 1956 until the late 80s attracted great interest from spectators of all ages gathered on the grandstand and around the circuit.