149 drivers from all over the world gathered last weekend on the Schweppermannring of Ampfing to fight for the coveted victories in very mixed weather at the big Final of the 2019 German Kart Championship. The titles finally went to Harry Thompson (DKM), Robert De Haan (DJKM), Stan Pex (DSKM) and Senna Van Walstijn (DSKC). 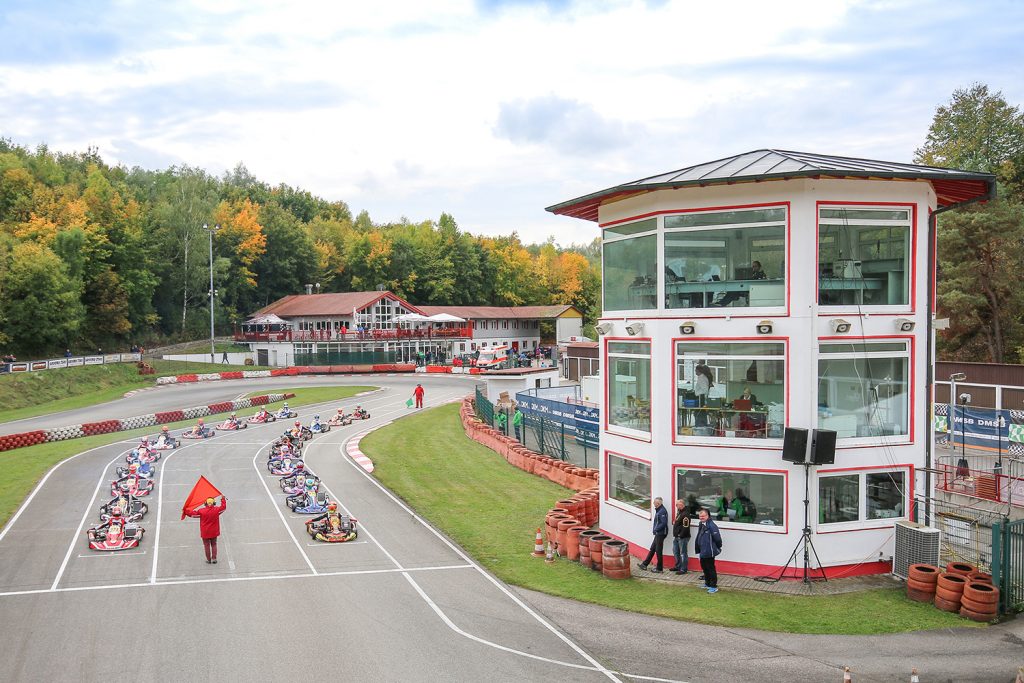 Mid-April, the kick-off to the new DKM season took place in Italy’ Lonato. From there, the drivers from more than 25 countries traveled through Germany, Italy, and Belgium. The locations in Wackersdorf, Kerpen, and Genk followed and the Final event took place in the Bavarian Ampfing. Next to thrilling fights for the titles, the weather also made things difficult for the drivers. The challenge was especially high on Saturday: stormy rain showers caused difficult conditions on the 1.063 meter-long track.

The duels for the championship were in focus. In all four grade series, no decisions had been made yet and the ranked races went accordingly interesting. On Sunday evening, Harry Thompson (DKM), Robert De Haan (DJKM), Stan Pex (DSKM) and Senna Van Walstijn (DSKC) were able to rejoice about the championship titles.

The German Electric Kart Championship took place again with drivers from eight nations starting at the penultimate event of the year. The victories were shared by Luka Wlömer and Jasin Ferati. The Season Finale of the first pure electric kart racing series in the world will take place in two weeks within the framework of the Rotax MAX Challenge Grand Finals in Sarno.

In the German Kart Championship, four drivers still had chances of winning the title before the Final: Hugo Sasse (TB Racing Team), Lorenzo Travisanutto (CV Performance Group), Harry Thompson (Ricky Flynn Motorsport) and Kas Haverkort (Kartshop Ampfing). In Qualifying and in the heats, none of these names could be found at the front of the field though. Felix Arnold (Kartshop Ampfing) drove to Pole position on the home track of his new team. In the heats, Hannes Janker (TB Racing Team) then fought his way to the top during his DKM-comeback.

Thrilling fights dominated the final races on Sunday. During the first confrontation, Janker and Alexander Tauscher (Junior Team75) fought for the leading position. At the finish line, Tauscher came in first and celebrated his maiden victory of the season. Behind Janker, the three favorites Travisanutto, Haverkort and Thompson followed. British Harry Thompson fought his way forward from the 17th position to the Top Five. Sasse stayed in the fight for the title as well in seventh place.

The final title decision was made in the season race. Janker took the best start but Thompson fought his way to the front and drove towards the title. He wasn’t fazed by a short racing break either: “It was a tough weekend for us. Everyone gave their best and wanted the title. It’s great to have won for the second time. We’ll see what else is still in store.” Behind him, Sebastian Ögaard (Ward Racing) fought his way forward to second place. The further ranks were mixed up after the race due to several time penalties. In the end, Luca Griggs (Kartshop Ampfing) was counted third in front of Leandro Anderrüti (RS Schumacher Racing Team) and Travisanutto. German Hugo Sasse fell back to twelfth position and ended Vice-Champion, just as in 2018.

Since the start of the season in Lonato, Robert De Haan (Energy Corse S.R.L.) is leading the overall rankings of the German Junior Kart Championship and didn’t give it away at the final event in Ampfing as well. His pursuer Christian Ho (Ricky Flynn Motorsport) tried everything to take away the title from the Dutchman.

Ho led the field during Qualifying and both heats. From Pole position, the driver from Singapore was unstoppable during the first final race as well and kept the fight for the title theoretically open due to his victory. Behind second driver Martinus Kleve Stenshorne (KR Motorsport s.r.l.), De Haan followed in third place. The Dutchman drove safely until a slow phase but then had to let the young Norwegian pass him by. In the fight for the remaining Top Five-places, Levente Révész (KR Motorsport s.r.l.) and German Daniel Gregor (Junior Team75) prevailed. The latter received a spoiler penalty after the end of the race though and was only ranked tenth. His position was taken by Calle Bergman (WARD Racing) from Sweden.

Kick-off winner Christian Ho led the second final race for a long time as well. De Haan kept really close though, drove past the Ricky Flynn-driver during the last lap and won the race. At the same time, he became the DJKM Champion of 2019. “I’m really happy to have won. This was a tough year in which I learned a lot. I’d really like to thank everyone who accompanied and supported me in this success”, said De Haan in his winner’s interview. Ho followed on second place in front of Stenshorne and Révész. Gregor showed an impressive catching-up race in front of his team leader and Le Mans winner Timo Bernhard and finished the race in fifth place.

DSKM: Changing of the guard for the Pex family – Stan wins the title

Stan Pex (SP Motorsport) already had a considerable advance in the German Shifterkart Championship before the Final on the 1.063 meter-long track in Upper Bavaria and turned up the heat during the course of the weekend. On Saturday, the lead in Qualifying and in the heats belonged to his brother Jorrit Pex (SP Motorsport). The six-time DSKM champion was at the front of the field and then also achieved the victory at the first final race on Sunday. During this, he had to fend off severe attacks by Stan and Benjamin Tornqvist Persson (CRG Holland). Both drivers were temporarily in the lead but only came in second and third at the finish line. Then-Champion Fabian Federer (SRP Racing Team) and Emilien Denner (CPB Sport) followed in the remaining places.

Federer caused joy for the SRP Racing Team in the end again. The South Tyrolean raced forward to first place and celebrated his second victory of the season. Stan Pex came in second and thereby achieved the seventh DMSB title for the Pex family. “We’ve worked really hard for this success and showed a good performance this weekend as well. Now we’re already looking towards 2020 and aren’t going to take a break during wintertime”, he gave an outlook on the future after a well-deserved shower with sparkling wine.

The top three was completed by Denner, followed by Jorrit Pex and most successful German driver André Matisic (Solgat Motorsport). After a lot of bad luck during the heats, the driver from Hamburg was in the last place and managed a great comeback on Sunday.

A trio consisting of Valentino Fritsch (Biral ART Racing KSW), Senna Van Walstijn (SP Motorsport) and Davids Trefilovs (SRP Racing Team) fought for the championship title in the DMSB Shifterkart Cup. After Saturday, Van Walstijn from the Netherlands had the best chances. The protégé of Stan Pex’ Racing Team led the field consisting of 40 drivers. The field was then divided again for the two Prefinals and the 17 best respective drivers qualified for the big Final. It was no surprise that the victories were shared between two title favorites: Van Walstijn and Trefilovs.

It then came to a direct exchange of blows in the final race run over 24 laps. The two front runners directly drove away from their pursuers and fought for victory. Towards the middle of the race, Tefilovs built a small gap and won the race. It wasn’t enough to win the championship though. Second place was enough for Van Walstijn to jump to the top of the championship podium. “The conditions during the final race weren’t easy today. I did it in the end though and would like to thank my team for their brilliant work this year. I’d also like to congratulate my team leader Stan Pex on his victory at the DSKM”, the Dutchman reflected on his debut season in the shifter karts. Valentino Fritsch followed in third place in front of routine driver Andreas Schrangl and his team-mate Robert Kindervater.

The TB Racing Team won the title of the team ranking and was thereby rewarded for the successes during the course of the year. A successful 2019 season ended in Ampfing and the organizers are already excitedly looking forward to next year. “We’ve experienced a record year. We already noted a high interest in January and even extended the field of the DSKC to 51 drivers. A big thank you to all drivers, teams, organizers, and participants for their trust in our championship. I’d also like to congratulate all participants on their successes. Currently, we’re already deep into planning the 2020 season and are going to present the racing calendar for the new season soon”, series coordinator Stefan Wagner summed up.