The new Champions of the Future series by RGMMC got officially underway on Friday, July 17th, at the Circuito Internacional de Zuera, in Spain. Juho Valtanen (OK), Martinius Stenshorne (OK-Junior), Dmitry Matveev (Mini) and Paolo Ippolito (KZ2) took pole position in their respective classes before the first eight Qualifying Heats saw other contenders emerge ahead of a busy and highly-competitive weekend of racing! 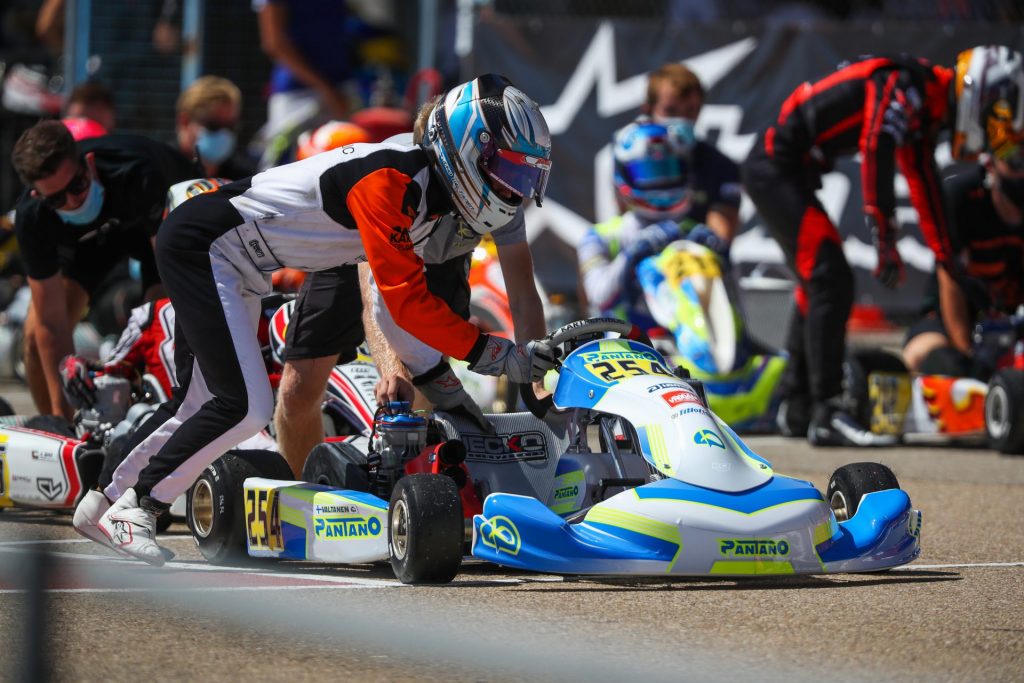 Sunny weather and temperatures above 25° welcomed the participants of the First Round of the 2020 Champions of the Future series, the new international karting competition for FIA Karting classes created and hosted by RGMMC.

Drivers and teams enjoyed dry track conditions for their respective Free Practice sessions, Qualifying series and opening heats on the Zuera International Circuit. The OK and Junior classes, split into groups due to their high number of entries, went through three qualifying races on Friday while the Mini and KZ2 categories competed on one occasion.

The first Qualifying Heat of the weekend went to Jamie Day (Birel ART/TM) who took the win in front of Valtanen and Joe Turney (Tony Kart/Vortex), author of a six-place recovery. Andreasson emerged victorious in the second race (C-D) against Andrea Kimi Antonelli (KR/IAME) and a recovering Clayton Ravenscroft (Birel ART/TM), both promoted one rank after Maya Weug (Birel ART/TM) lost her second place due to a penalty. Valtanen dominated the third heat of the day (A-E) ahead of Gray and Harry Thompson (KR/IAME) who made up five places.

Stenshorne kept himself ahead of the pack in the opening heat (A-B) that he led from start to finish in front of Alfio Spina (KR/IAME). The Italian drove through the field from tenth and preceded Arvid Lindblad (KR/IAME) who also produced his effort from eighth on the grid. Tuukka Taponen (Tony Kart/Vortex) took the victory in the next race (C-D), a short distance ahead of Timoteusz Kucharczyk (RK/TM) while Badoer was classified third following a penalty handed to his countryman Valerio Rinicella (Parolin Le Mans/TM).

Aaron Garcia (KR/IAME) managed one of the strongest recoveries of the day from 28th to sixth, one position in front of the pole-sitter Irfan. Stenshorne took his second win in the third heat (A-E) ahead of Edgar Anpilogov (Kosmic/Vortex) before a penalty pushed the Frenchman down the order, promoting Dion Gowda (Kosmic/Vortex) and Alexander Gubenko (Kosmic/Vortex).

Dmitry Matveev (Energy Corse/TM) ended up as pole-sitter in a very tight Qualifying session in Mini against Kean Nakamura Berta (KR/IAME), locking up the front row of the grid for 0.029 seconds behind the Russian. Adam Hideg (KR/IAME) was third-fastest ahead of two of the seven Spanish drivers competing in the class at Zuera, Christian Costoya (CRG/TM) and Luna Fluxa (KR/IAME). Matveev faced little opposition in the first Qualifying Heat, winning in front of Nakamura Berta who managed to keep a recovering Mark Kastelic (KR/TM) behind him until the finish line.

Paolo Ippolito (CRG/TM) secured the pole position in the gearbox class, 0.076 seconds faster than local driver Brad Benavides (Sodikart/TM). Daniel Vasile (DR/Modena) completed the Qualifying with the third-best time, followed by Brandon Nilsson (CRG/TM) and Antonio Garay Salinas (Sodikart/TM). Ippolito made good use of his starting position and took a distant win in the first heat with Benavides and Vasile completing the Top Three, split by less than 0.4 seconds.

Check out the full Qualifying results for OK, Junior, Mini and KZ2.

The competitors of the First Round of Champions of the Future by RGMMC will be back on track on Saturday from 8:30 am for their respective warm-up sessions, followed by a busy program of 18 Qualifying Heats!

Follow the racing up-close at Zuera on our live page!