Following Qualifying and the first rounds of Heats on Friday, the 168 drivers of the WSK Champions Cup have had a “busy day at the office” completing their entire set of qualifying races and, in the case of OKJ and Mini, get a chance to access Sunday’s Finals on the Adria International Raceway. 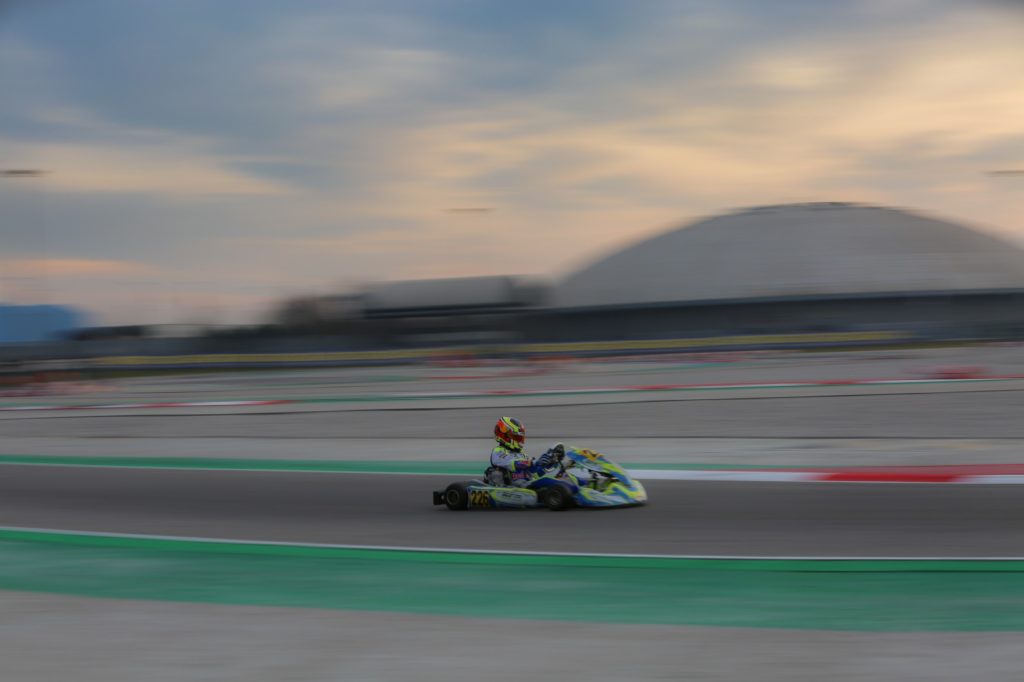 In cold temperatures but dry track conditions, the kick-off event of this year’s WSK campaign went on this Saturday with the remaining Qualifying Heats for the three categories at play: OK, OK Junior and 60 Mini.

If all 29 names in the senior class should make it through to the final race on Sunday afternoon (that allows a maximum of 34 drivers), the task proves to be trickier for both Junior and Mini categories to get past the Qualifying Heats and get a “golden ticket” for the Prefinals that will eventually decide the final starting grid.

Starting with the OK class, Harry Thompson (FA Kart-Vortex) has been able to overcome a tricky qualifying (9th) on Friday to put himself in the leader’s shoes in the three Heats’ combined results. After kicking off his weekend with a fourth place, he then added a third and a fifth to claim the Pole position for the Prefinal on Sunday morning (11:50). Beaten by a mere point in the Provisional Classification, and despite place in his last race, Dexter Patterson (KR-IAME) will be starting alongside his fellow countryman on the front row.

Local boy Cristian Comanducci (Tony Kart-IAME) will be third on the grid with Hoff (Exprit-TM) by his side. The young Dutchman managed to win the third Heat after suffering from two less-satisfying results in 11th and 7th. Aleksey Sizov (Tony Kart-TM) and Friday’s Pole-sitter Taylor Barnard (KR-IAME) will form the third row. Despite two consecutive wins in the bag, the young Rosberg Academy protege suffered a DNF halfway through his last race that prevented him from a potential front position.

The rest of the top ten sees Italy’s Federico Albanese (EVO Kart-TM) clinching the seventh spot on the grid (4th as best personal result of the day) ahead of Kai Askey (FA Kart-TM), Gabriele Mini (Parolin-TM), who limited the damage (4th in his second Heat) after starting each race from the 26th position, and Danny Carenini (CRG-IAME), handicapped by a late DNF. Second in his first Heat yesterday, reigning World Champion Lorenzo Travisanutto (KR-IAME) didn’t get a similar outcome this Saturday with a DNF and a seventh that plunged him down to 12th on the Prefinal grid.

Click here to consult the Provisional Classification of the OK class.

With 100% wins (4), James Wharton (FA Kart-TM) made perfect use of his Pole position signed on Friday to dominate his rivals and claim the highest spot in the Juniors’ provisional rankings. His Ricky Flynn Motorsport’s teammate Thomas Ten Brinke (FA Kart-Vortex) will try to give him a hard time on the Prefinal A‘s front row after a strong Saturday completed with two wins and two-second positions. France’s Marcus Amand (KR-IAME) will start behind them with Robert De Haan (Energy Corse-TM) to keep him company. The third row will be 100% Italian with Paolo Gallo (CRG-IAME) and Enzo Trulli (CRG-IAME) while Brando Badoer (Parolin-TM), the son of another former F1 driver, will be on the 7th position alongside Conrad Laursen (FA Kart-Vortex) in 8th, ahead of Laurens Van Hoepen (FA Kart-Vortex), newly-introduced in Ricky Flynn’s team, and Ugo Ugochukwu (FA Kart-Vortex).

Click here to consult the Provisional Classification of the OK Junior class.

Coskun Irfan (Parolin-TM) was another driver who literally crushed the opposition in the 60 Mini category. Qualified third overall and first in his Group C, the young Brit has won all of his Heats to top the provisional classification, a result synonymous of Pole position for the Prefinal A. Seven points behind, Alex Powell (Energy Corse-TM) concluded his performance with three wins to get the first spot in the Prefinal B. As the 68 qualified drivers (out of 82) are to be split into two Prefinals (of which only the 17 best drivers will get to compete Sunday’s Final), the rest of the Prefinal A’s top ten will be composed as follows: Rashid Al Dhaheri (Parolin-TM), 2nd thanks to five second places in a row, Dmitriy Matveev (Energy Corse-TM) 3rd with two Heats won, Juan Nores Soldavini (Lenzokart-LKE) 4th, Douwe Dedecker (Parolin-TM) 5th, Sebastiano Pavan (Parolin-TM) 6th, Francesco Marenghi (Tony Kart-TM) 7th, Menyhert Krozser (Parolin-TM) 8th, Kirill Kutsov (Energy Corse-TM) 9th and Julius Dinesen (Parolin-TM) 10th.

Click here to consult the Provisional Classification of the 60 Mini class.

The 2019 edition of the WSK Champions Cup finds its conclusion this Sunday with the warm-up sessions starting at 9:00, Prefinals from 10:30 and Finals from 14:00.

Click here to follow the event with the official Live Timing (provided by Apex Timing) and Live Streaming (by WSK Promotion). Reports will also be published every day on this website.

Find below the complete schedule of the 2019 WSK Champions Cup on the Adria International Raceway.