The 2019 WSK Champions Cup has unveiled its winners at the Adria International Raceway. After three days of intense competition, Taylor Barnard (OK), Alex Dunne (OKJ) and Andrea Filaferro (60 Mini) are the first laureates of this new WSK season that kicked off in impressive fashion on a (very) cold Sunday! 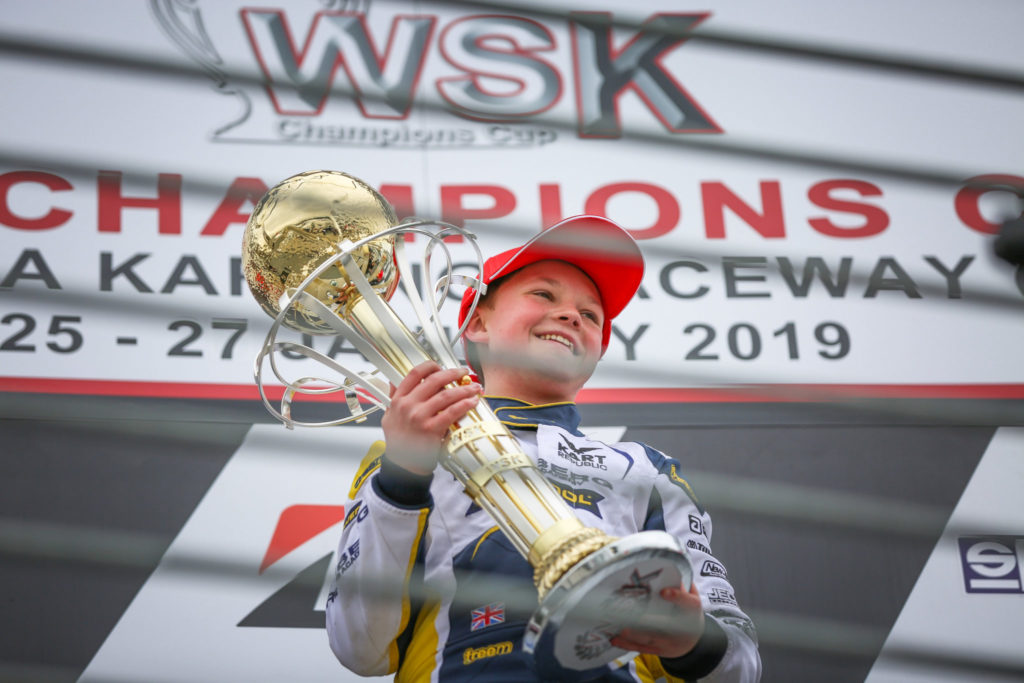 Despite some threatening names in the field, the OK Final has turned into a “walk in the park” for Rosberg Racing’s Taylor Barnard (KR-IAME). The young Brit had already got up on the right foot this Sunday morning when he claimed the class’ Prefinal to start the last race of the weekend from Pole position. An advantage put to good use by the Kart Republic driver who took the lead at turn 1 and kept it until the chequered flag, 20 laps later. “It was a good race”, he declared on the podium. “I had a good start and managed to hold on from there. A big ‘thank you’ to everybody in the Kart Republic team, to Dino [Chiesa, ed.], IAME and everyone else.” A winning-conclusion to an equally-impressive weekend for Barnard, only a few weeks after his victory at the WSK Final Cup, last November, at the same venue.

Pushed back to 25th on the grid after a DNF and a penalty in the Prefinal, the 2018 FIA Karting World Champion cruised through the field at lightspeed to appear 11th after one lap in the race before being stuck on the edge of the top ten until the flag waved. Another driver who won’t keep much positive memory from this weekend is Harry Thompson (FA Kart-Vortex). of Saturday’s Heats, the Ricky Flynn driver was forced to start, like Travisanutto, from the back of the grid because of in the morning. Still determined to make up for the lost ground, his final race came to a premature end in a big incident at turn 1 involving seven other drivers. Click here for the full results of the OK Final.

Unlike the previous Final of the afternoon, uncertainty has prevailed until the last meters of the 16-lap race to crown the winner of the OK Junior category. In a very animated confrontation from start to finish, Ireland’s Alex Dunne (Exprit-TM) has given Forza Racing reasons for comfort in the cold of Northern Italy by claiming the win with a good 1.2-second gap over his teammate Arvid Lindblad (Exprit-TM). “To be honest, I’m a bit speechless now”, said an emotionally-moved Dunne on the podium. “I just want to say ‘thank you’ to everyone who helped me and thank you to my Mum and Dad.”

at the flag, Thomas ten Brinke (FA Kart-Vortex) came close to edge the victor when an attack from Polesitter Andrea Kimi Antonelli (KR-IAME) in the last lap allowed Lindblad to dive through and catch second place. Long involved in a battle for the trophy, Antonelli eventually lost the podium to finish fourth in front of Saturday Heats’ leader James Wharton (FA Kart-Vortex) against whom he fought in the early stages of the Final. Ugo Ugochukwu (FA Kart-Vortex) took sixth place before being handed a five-second penalty for wrong positioning of his front fairing (9th overall). Ariel Elkin (Formula K-TM) moved up a position ahead of Andrey Dubynin (Croc Promotion-TM), Marcus Amand (KR-IAME), who briefly appeared in the front group before losing ground towards the Final’s conclusion, Ugochukwu and Brando Badoer (Parolin-TM) who emerged from 20th on the starting grid. Click here for the full results of the OK Junior Final.

The Final B of the Juniors, a concept introduced for the first time this year by WSK Promotion, was won by Brazilian driver Vinicius Tessaro (Parolin-TM), one-tenth of a second ahead of Cristian Bertuca (Birel ART-TM) and Alessandro Cedenese (Parolin-TM) in third. Click here for full results.

In the always-anticipated Mini Final, the 34 youngest drivers on track were eager to go racing, so much that a second formation lap was necessary to get the starting grid in order. At lights out, Andrea Filaferro (Tony Kart-TM) surprised both the Polesitter Maksim Orlov (Parolin-TM) and Prefinal B’s winner Coskun Irfan (Parolin-TM) to take the lead at turn 1! With Irfan dropping back to fifth before retiring, Orlov could put pressure on the Italian’s shoulders. The two briefly swapped positions before Filaferro “sealed the deal” to conquer the win at the end of the ten laps. Fourth on the grid, Francesco Marenghi (Tony Kart-TM) quickly put himself into third place to chase down Orlov after the latter had lost ground on the leader. If the Russian driver seemed able to hold on until the chequered flag, Marenghi still went for the move in the very last corner to make it a one-two for the Tony Kart colors, while his opponent suffered what seemed to be a mechanical failure that dropped him back to 8th on the line.

Rashid Al Dhaheri (Parolin-TM) took advantage of Orlov’s misfortune to jump on the podium ahead of Joel Bergström (Parolin-TM) and a deserving Lukas Malek (Parolin-TM) who made up 16 places in the course of ten laps! Sixth overall, Belgium’s Eyckmans (Parolin-TM) preceded Dmitriy Matveev (Energy Corse-TM) with Orlov, Alex Powell (Energy Corse-TM) and Anatoly Khavalkin (IPK-TM) completing the top ten. Click here for the full results of the 60 Mini Final.

The Final B of the class was won from Pole by Polish driver Edgar Anpilogov (Parolin-TM) in front of Matteo De Palo (Parolin-TM) and German Foteev (Energy Corse-TM). Click here for full results.

The next event of the WSK 2019 season, Round 1 of the Super Master Series, will take place from February 1st to 3rd on the same Adria International Raceway. Live Streaming, Live Timing, and everyday reports will be available on this website.