Just over a month after the KZ World title won by Marijn Kremers along with the double with Riccardo Longhi, Birel ART has confirmed that it is a formidable weapon for the drivers in gearbox categories. In the first round of the WSK Open Cup at Lonato, Giuseppe Palomba dominated his competitors by winning all his races, including the Final, with a good lead. 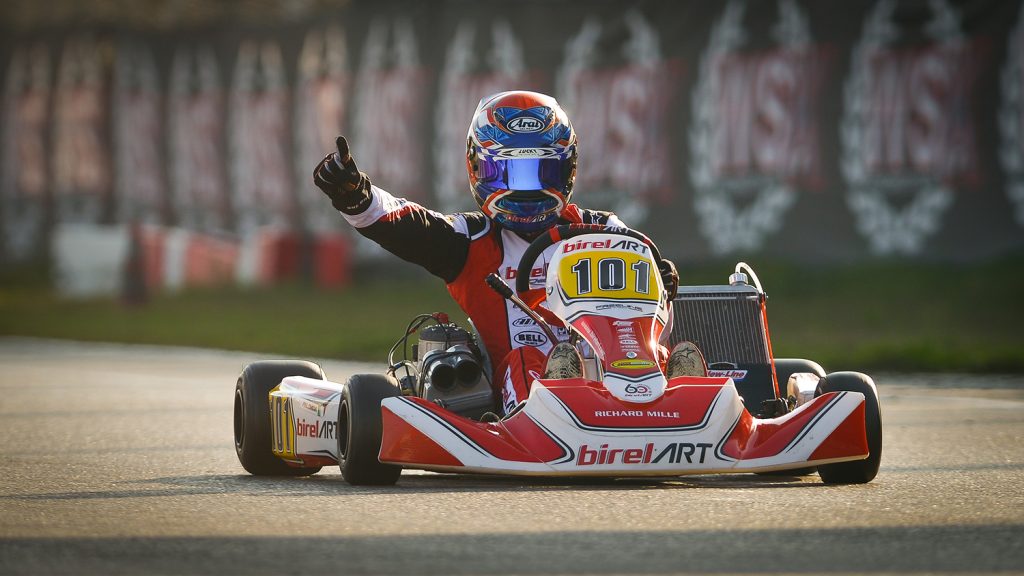 Palomba didn’t take long to win a big race at the wheel of a Birel ART/TM, only a few months after his arrival in the official team. The Italian driver was very comfortable on the benchmark track of South Garda Karting.  From the beginning of the meeting, he found himself at the front of the field by achieving second in Qualifying. Alongside drivers like Stan Pex, Alessio Lorandi and Giacomo Pollini, Palomba was fastest in the Qualifying Heats with three consecutive wins!

“I admit to having made excellent starts each time,” said Giuseppe. “But most importantly, the equipment proved to be super-efficient over the laps, which allowed me to control my position as soon as I found myself in the lead.” The Prefinal was to be just as sparkling for Palomba. “Pollini managed to take the lead for a few laps but I was able to retake him and protect myself from a possible attack. I set the fastest lap in the race which will also remain as the absolute record of the event. I arrived in the Final with confidence.”

An intense and positive weekend

Continuously effective in all sectors of the Lonato circuit, the Birel ART chassis took Giuseppe Palomba to victory again, this time in the Final with an even greater lead. “It was a busy weekend for the Birel ART factory,” said the staff of the Italian factory. “At Sarno, our team managed the supply of equipment perfectly during the Rotax World Final in Sarno. At the same time, our race team was also ready for this First Round of the WSK Open Cup at Lonato. Regarding the quality of our products, this new success is a very positive sign sent to our distributors around the world.”

Also in KZ2, the Birel ART brand was pleased with the level of performance of the driver Andrea Dale, seventh after the heats. Unfortunately, an incident at the start of the Prefinal deprived him of a good result. As for Leonardo Marseglia, he was quick in Qualifying (fifth) before winning his place in the top 10 in the Final. However, a penalty for an unhooked spoiler pushed him back to 11th position. Forced to retire in the Prefinal, Andrea Rosso concluded his Final with a remarkable comeback from 30th to 19th place.

The Birel ART team also welcomed the Italian Matteo Massetani in OK, the Finn Nico Lahnalahti and the Dutchman Thijs Keeren in 60 Mini, as well as the Italian Cristian Bertuca, the Indian Ruhaan Alva and the Italian Lorenzo Ressico D’Aloisio in  OK-Junior. The latter had some great results at Lonato, such as a third place in a heat and a Prefinal where he was fourth for several laps.