The Birel ART brand continues to win at the highest level worldwide! And if it isn’t with the official team, success comes with a private team, demonstrating once again that the Italian chassis is indeed the current benchmark in the KZ and KZ2 categories. Simone Cunati dominated the Final of the International Super Cup – KZ2 masterfully, while Giuseppe Palomba ensured a double despite starting in seventh position. 2019 World Champion and reigning European KZ Champion Marijn Kremers, with Ricciardo Kart, was just four tenths from a new title. They clinched the Vice-World Championship after a difficult but perfectly managed event by Birel ART. 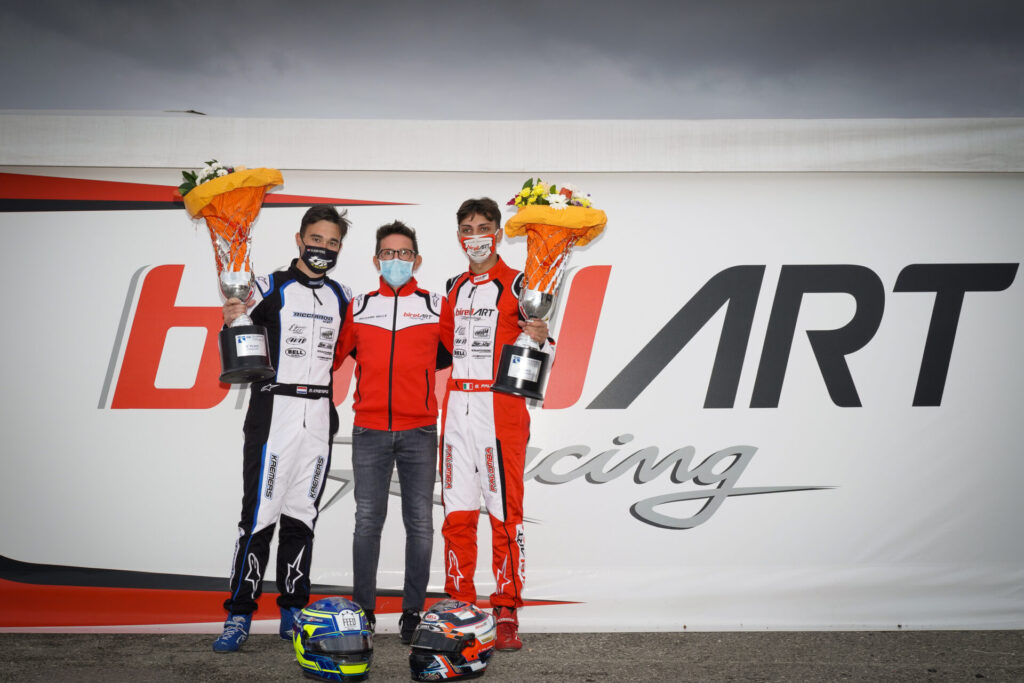 Five drivers with Birel ART chassis in the top 12 of the KZ World Championship, including one on the second step of the podium; six Birel ART chassis in the top 12 in the KZ2 International Super Cup, with a fabulous double on the finish line. The figures speak for themselves for the products of the Lissone factory. This FIA World Karting event held at the beginning of October at the South Garda Karting of Lonato was undoubtedly the most eagerly awaited competition of the season and Birel ART draws extremely positive conclusions from it, as its President Ronni Sala admitted.

“We had to deal with changing weather conditions at the beginning of the meeting and I think that our chassis proved to be the most competitive in all conditions: on rain tyres, slicks or even on an intermediate track! I must salute the talent of the drivers and the brilliance of the teams, official or private, who enabled us to achieve this result. It’s very important for our factory to see that all the teams using our chassis are performing well.”

“This double in KZ2 is very rewarding. In KZ, Marijn Kremers came very close to the title. He was a little faster at the end of the race than the leader, but lost time in a duel with another driver. That’s racing! I have to admit that after the 2020 European Championship title, it is however very satisfying to finish second in the World Championship”.

Leader after the Qualifying Heats, which were made very difficult by the changing weather conditions, Simone Cunati fully deserves his victory in the Final. Thanks to the magnificent work carried out by the Modena Kart ASD team, the Italian brings a magnificent trophy to the Birel ART brand in this event that could be called “KZ2 World Cup”, so high is the standard. A member of the factory team, Giuseppe Palomba certainly had the speed to win.

However, he had some difficulties in the rain and he was only able to start from the seventh position in the Final. In the end, he secured a magnificent double. Ranked fourth, Leonardo Marseglia obtained his best result in an FIA Karting event. Birel ART also congratulates Matteo Zanchi (Zanchi Motorsport) in sixth, Viktor Gustavsson (Charles Leclerc by Lennox Racing) in 10th, Filippo Berto (Emilia Kart) in 12th and all the drivers who used Birel ART chassis.

Victory was close for Kremers

The rain that fell in the Qualifying session made the teams’ work very difficult at Lonato. Alessandro Irlando jeopardised his chances of a podium finish on Friday, although he was still extremely fast, as evidenced by his second fastest time in the Final where he finished 10th. An incident in one heat severely delayed Matteo Vigano, who was defending the Charles Leclerc by Lennox Racing colours. However, he moved up from 14th to ninth place, two places ahead of his team-mate Antonio Fuoco. The car driver certainly enjoyed himself at Lonato. Riccardo Longhi took the official record of the event with 45″874, whereas Kremers remained the fastest driver of the meeting with his time of 45”588 in the warm-up.

Marijn Kremers, who won two heats and was on the verge of taking pole position, was close to winning. “A few drops of rain fell before the start, the first lap wasn’t easy and I lost the lead,” commented the Dutchman. “Nevertheless, victory was still within reach, before another driver came in between us. By the time I came back, the leader had taken more than a second’s lead. In the end, the gap narrowed to four tenths, but in a few more laps I could have made an attack! In any case, this will remain a great season for me, Ricciardo Kart, Birel ART and TM Racing. Thanks to the whole team…”