From victory at the Winter Cup at the beginning of the season to successes in the WSK throughout the year, including a new European Championship, the Energy Corse brand and its official team completed a series of victorious meetings at the international level in 2019. All these trophies won by the drivers in the Energy Corse colours are the result of meticulous work to offer competitive equipment to the drivers, recognised technical knowledge and high quality racing team staff. 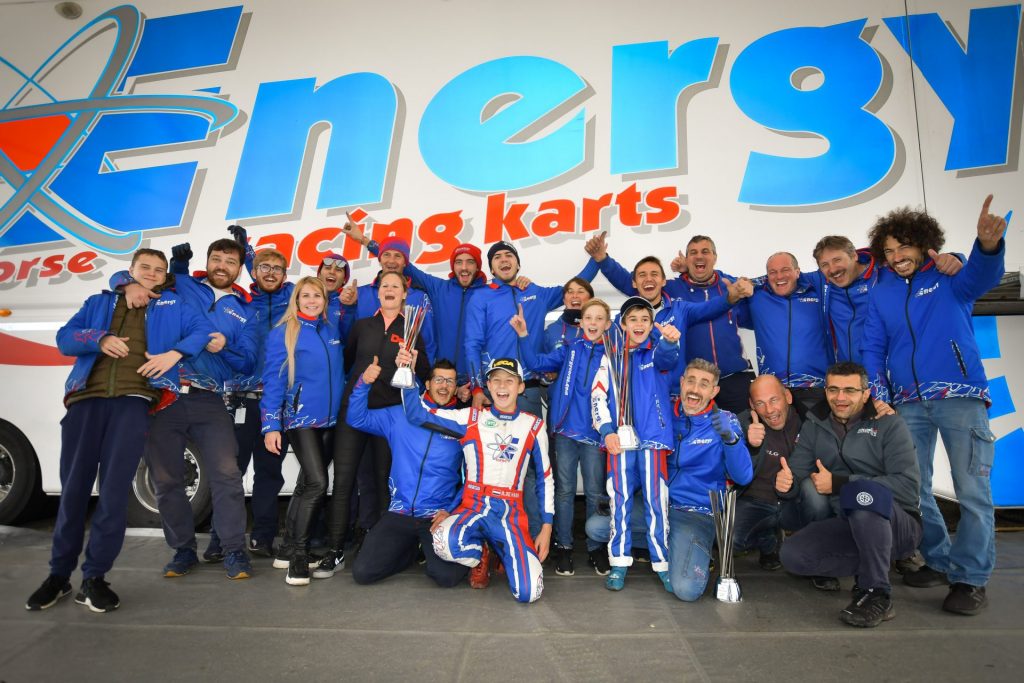 A splendid season in Mini

The Energy Corse chassis was omnipresent at the front in 60 Mini, Mini Rok, Rotax Mini Max and X30 Mini. 2019 started with a double at the Winter Cup for the Jamaican Alex Powell and the Russian Kirill Kutskov. Powell then went on to collect podiums: 3rd in the WSK Super Master Series with a victory at La Conca, 3rd in the Italian Championship with four podiums including two victories, winner of the International Rok Cup Final in front of his Russian team-mate Dmitry Matveev and 3rd in the WSK Euro Series at Adria.

In addition, Kutskov won both races of the Italian Championship at Adria, while Dmitriy Matveev finished the WSK Euro Series with a win. Matveev was a big success at the end of the season: 2nd in the WSK Open Cup after a victory at Castelletto and the title in the WSK Final Cup at Adria. Many other drivers have had the opportunity to shine with the Energy chassis, which remains a benchmark in Mini, as well as in Micro. For example, there was a brilliant victory for the American Kai Johnson in Micro Rok during the prestigious Rok the Rio event in Las Vegas in the USA.

2019 was definitely a season to remember for Energy Corse. Since the early 2000s, Energy has been the most successful brand in the KZ2 category in CIK-FIA races with seven European Champion titles! This new title is thanks to Emil Skaras, who has become a potential winner since he joined the Energy Corse team. At Wackersdorf in Germany, the Swede led the Final from start to finish and definitively claimed the European Championship at the Sarno circuit. 2019 has been his best season in karting, as he also finished 3rd in the International Super Cup at Lonato, coming very close to victory.

De Haan a revelation in OK-Junior

Winner of the Rotax Grand Finals in 2018, Robert De Haan chose the Energy Corse team for his debut in the main OK-Junior Championships. The young Dutchman started his season with three consecutive podium finishes in the WSK Super Master Series in Adria, the French Championship at Angerville and then the WSK Euro Series at Angerville. De Haan was outstanding in the German Championship (DKM), where he dominated the season: 2nd and 1st at Lonato, twice 1st at Wackersdorf, twice 1st at Kerpen, twice 2nd at Genk, 3rd and 1st in Ampfing. It is, therefore, a particularly well-deserved title!

In FIA Karting races, he finished 4th in the European Championship in Belgium and a remarkable seventh place at the World Championship in Finland after a gain of ten places. On that day, the Finn Rasmus Joutsimies shone in OK by finishing the heats in fifth position. Unfortunately, success was not on his side in the Final.

In addition to OK-Junior, Robert De Haan made a magnificent comeback to finish in second place at the IAME International Final at Le Mans in the X30 Junior class, before finishing fourth at the Supernationals in Las Vegas in the same category.

“Energy Corse would like to congratulate all the drivers who defended our colors in 2019, as well as all our distributors, engine manufacturers, and technicians, not to mention the TM Racing factory,” said manager Mick Panigada. “Our brand has won many events all over the world. I think we gave Energy to all our drivers during the season! I look forward to seeing you in 2020, with a team that again plans to be at the forefront of the battle in all international categories. Join us!”