24 Qualifying Heats have kept the Kartodromo La Conca busy this Saturday as the Round 3 of the WSK Super Master Series is getting near its conclusion. If Macintyre (60 Mini), Lindblad (OK Junior) and Valtanen (OK) have taken the provisional lead, the hardest part is yet to come with the Prefinals on Sunday morning leading to the last and most important showdowns of the weekend, while the least fortunate drivers will get to race one last time in Finals B (OK Junior / 60 Mini). 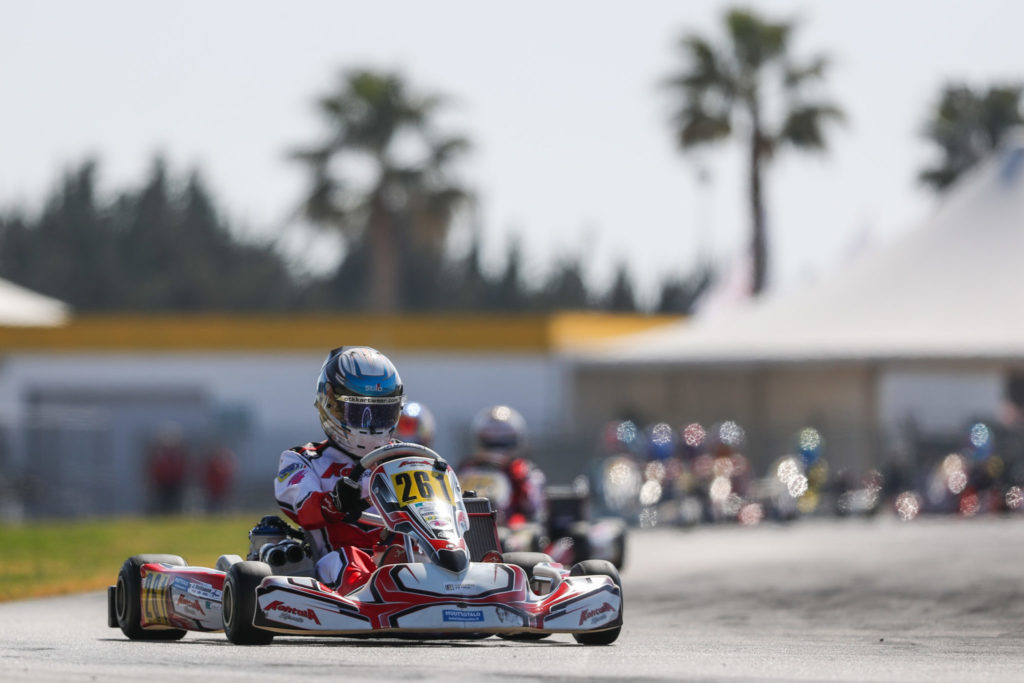 Juho Valtanen (Kosmic/IAME) emerged up front at the end of a strong Saturday that saw him win all of his three Qualifying Heats. The Finnish driver will consequently start the Prefinal A in Pole position. The other Prefinal will be led by Dexter Patterson (KR/IAME). Lonato’s winner had set the pace in Qualifying before claiming two wins and a second place. He’s followed in the provisional ranking by his fellow countryman Taylor Barnard (KR/IAME) who took one win under his name. 2016 World Champion Pedro Hiltbrand (CRG/IAME) aligned the Top-3 results to reach a 4th position that will make him start the Prefinal B on the front row alongside Patterson. Luigi Coluccio (BirelART/TM) has concluded his Saturday in 5th with a second place as best personal result. Lorenzo Travisanutto (KR/IAME), who currently sits on top of the points ranking, managed to climb up the order to 17th overall (9th on the Prefinal A grid) after a tricky Qualifying session (19th best lap time).

Arvid Lindblad (Exprit/TM) has obviously found his pace around the Kartodromo La Conca. The young British driver had already put his Forza Racing colors up front in Friday’s Qualifying session. An advantage that he then converted straight into victory in the first Heat (A-E) before adding three more wins this Saturday. A clean afternoon that has granted him the seat of  leader in the Junior field and the Pole position for Sunday’s Prefinal A.

Second-fastest against the stopwatch, Andrea Kimi Antonelli (KR/IAME) has also kept his rank thanks to three victories, only a third place-finish preventing him from taking the Pole from Lindblad. He will nevertheless start the Prefinal B up front beside Thomas Ten Brinke (FA Kart/Vortex), third in today’s ranking with two wins. Nikita Bedrin (Tony Kart/Vortex, 4th) will try to challenge Antonelli on the Prefinal A’s front row while Brando Badoer (Parolin/TM) concluded the day in 5th position overall despite a distant 14th time in Qualifying. Kacper Sztuka (Tony Kart/Vortex) also entered the winners’ circle (D-E) to be classified 17th overall (9th on the Prefinal A starting grid).

Following a problematic second round two weeks ago at South Garda, William Macintyre (Tony Kart/Vortex) bounced back impressively by securing four wins out of five attempts to grab the lead of the provisional ranking and Pole position for Sunday’s Prefinal A. Currently second in the Series’ points, Ean Eyckmans (Parolin/TM) also had a good day at the office. Even if he only managed to win one Heat, the Belgian driver secured four second-place finishes to claim the Prefinal B‘s Pole position, 11 places ahead of his prime opponent and Series’s leader Rashid al Dhaheri (Parolin/TM) whose early win in Friday’s first Heat was compromised by two distant finishes.

Third overall, Alex Powell (Energy/TM) took two wins in the qualifying races to precede Maciej Glasysz (Parolin/TM), one Heat in the bag, and Friday’s Pole-sitter Coskun Irfan (Parolin/TM). With two wins and two other Top 3-results, the Baby Race driver could have dreamed for more until a five second-penalty (front fairing) pushed him from 4th to 12th in his last Heat. Second-fastest on Friday, Matteo Bagnardi (Intrepid/TM) also took a win (B-C) to end up 9th overall as well as Douwe Dedecker (Parolin/TM) who won the A-D race to qualify 7th on the Prefinal B’s starting grid. Despite a strong 6th lap time in Qualifying and a win in his first Heat on Friday (E-F), Nikola Tsolov (Parolin/TM) went through a day of ups (another win in the C-F race) and downs (three distant results) that pushed him down the order in 37th position.

The Round 3 of the WSK Super Master Series finds its conclusion this Sunday with Prefinals, Finals B (only for OK Junior and 60 Mini) and Finals for all three categories.