The Circuito Internazionale Napoli of Sarno went through a busy Saturday with the Qualifying Heats paving the way to Sunday’s Prefinals and Finals. Keanu Al Azhari (60 Mini), Nikita Bedrin (OKJ), Dilano Van’t Hoff (OK) and Lorenzo Camplese (KZ2) affirmed themselves as point leaders in each of the four classes at play before entering the last part of this opening weekend of the 2019 WSK Euro Series! 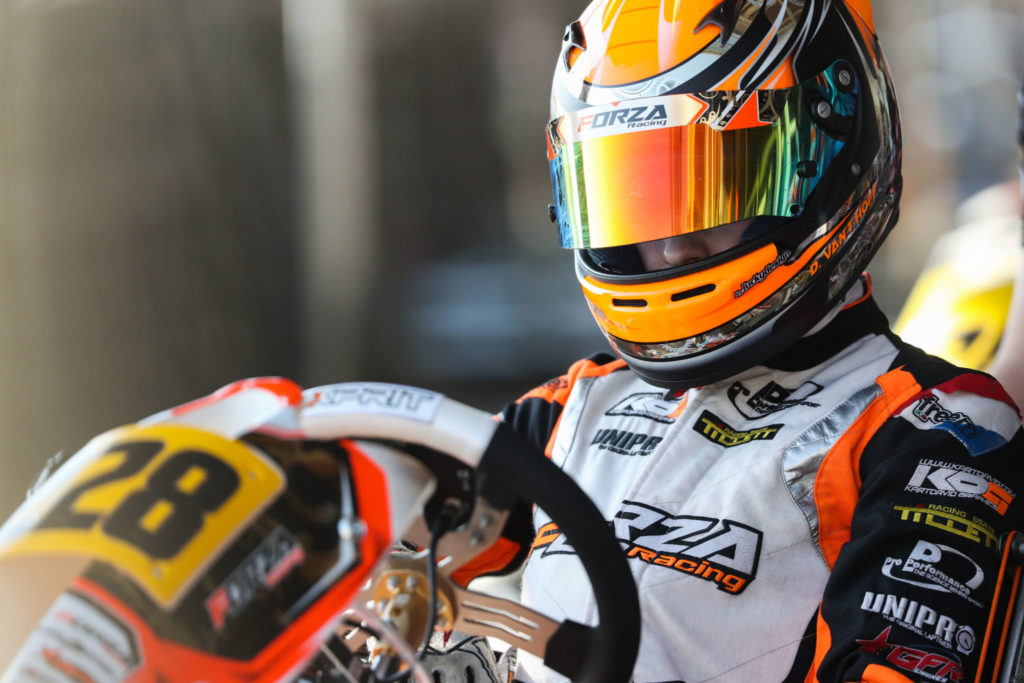 Dilano Van’t Hoff (Exprit/TM) ruled the OK class this Saturday in Sarno with two victories in the Heats putting him on top of the Prefinal starting grid. Dino Beganovic (Tony Kart/Vortex) will start alongside the Dutchman with Luigi Coluccio (BirelART/TM) and Lorenzo Travisanutto (KR/IAME) sharing the second row, the latter having won one Heat. Genis Civico Espona (Croc Promotion/TM) concluded his Saturday at the fifth spot ahead of Matheus Morgatto (Tony Kart/Vortex), Hannes Janker (KR/IAME) and Sami Meguetounif (Tony Kart/Vortex) who managed to classify himself within the top ten despite a distant 22th lap time in Qualifying. Taylor Barnard (KR/IAME) similarly recovered from 31st on each grid to finish 9th overall in front of Kirill Smal (Tony Kart/Vortex). Polesitter Dexter Patterson (KR/IAME) ended up in 14th place due to two troublesome races. Click here for the full OK provisional classification

Seven drivers enjoyed the victory in the 60 Mini. Among them, the Pole position of the Prefinal A went to Keanu Al Azhari (Parolin/TM) who claimed two wins while Jamaica’s Alex Powell (Energy/TM) won one race and will start next to him. The Belgian Douwe Dedecker (Parolin/TM) took Pole position for the Prefinal B thanks to several second places. Kirill Kutskov (Energy/TM) will complete the front row thanks to one win. William Macintyre (Parolin/TM) and Andrea Filaferro (Tony Kart/TM) won two heats each while Joel Bergström (Parolin/TM) and Maksimilian Popov (Parolin/TM) also secured one victory respectively. Click here for the full 60 Mini provisional classification.

Lorenzo Camplese (Tony Kart/Vortex) kept his hand on the KZ2 class by topping the provisional ranking. From Pole position, the Italian secured a fourth place and two wins, one more than his closest rival Anthony Abbasse (Sodikart/TM) who will, therefore, start at the forefront of the Prefinal B. Third in the ranking with one win, Alex Irlando (BirelART/TM) will share the Prefinal A’s front row with Camplese while Matteo Vigano (Tony Kart/Vortex) will put his kart alongside Abbasse in the second race decisive for the Final’s starting order. Riccardo Longhi (BirelART/TM) closed up the top 5 before his countryman Marco Ardigo’ (Tony Kart/Vortex), Marijn Kremers (BirelART/TM), Adrien Renaudin (Sodikart/TM), Jorrit Pex (KR/TM), who claimed one race, and Jeremy Iglesias (Formula K/IAME). Click here for the full KZ2 provisional classification.

The opening round of the WSK Euro Series will be concluded this Sunday with the Prefinals and Finals for each of the four classes.

As for every event in the WSK calendar, The RaceBox provides you with a special page available on this website with Live Timing and Live Streaming (by WSK Promotion, Sunday only) along with our complete reports published every day.