The Third Round of the 2019 WSK Euro Series kicked off with a few surprises at South Garda where Simon Puhakka (KZ2), Dexter Patterson (OK), Ugo Ugochuckwu (OKJ) and Nikola Tsolov (60 Mini) took the fastest time in Qualifying before the opening heats where new names emerged as well. 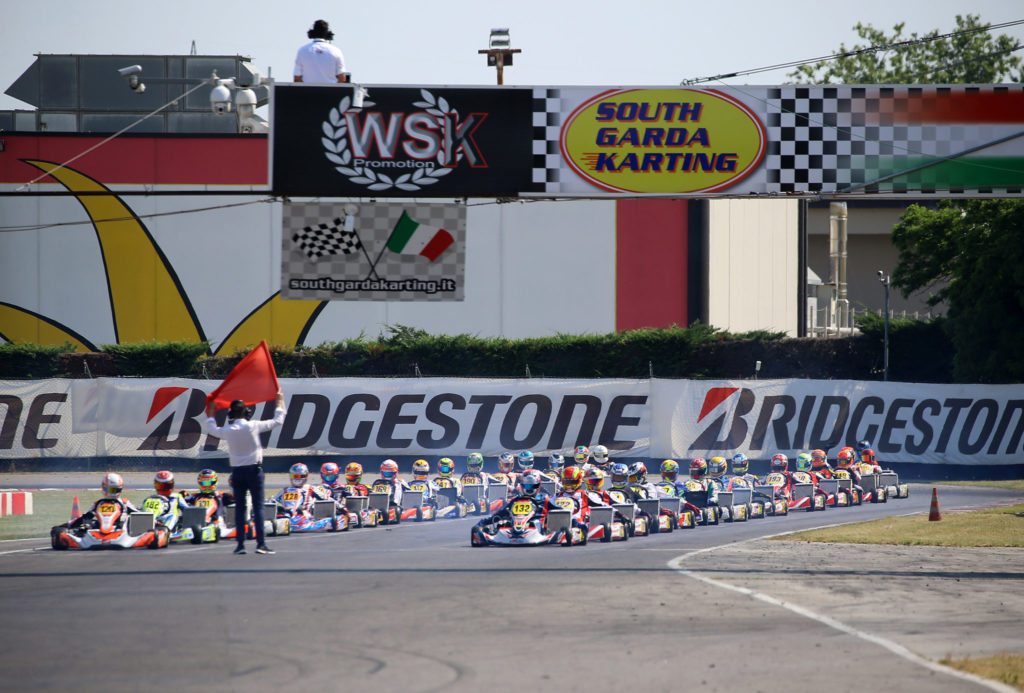 The atmosphere at the WSK Euro Series didn’t wait the first summer day to warm up. Temperatures among drivers on track have always been very high and some unexpected performances have been spiced up the atmosphere.

This is what happened today at South Garda Karting in Lonato where the Third Round of the European Series is underway. Several strong underdogs have slid into the fight for the top positions, starting in qualifying practice this morning. A good promise ahead of the final challenge that will take place next weekend in an exciting overnight round in Adria.

A remarkable group of 300 drivers completed scrutineering today at Lonato to enter the final stages of the event that will run tomorrow 41 Qualifying Heats to define the pecking order of eight Prefinals taking place on Sunday.

The most followed category this weekend is KZ2 that will run its closing appointment. The Finn Simo Puhakka (Tony Kart/Vortex) started off on a high confirming his lead in the provisional classification when he posted the quickest lap time in 46.309 seconds. His closest rivals, the French Anthony Abbasse (SodiKart/TM) and the Italian Riccardo Longhi (Birel ART/TM) were only ninth and eighth respectively. The Dutch Marijn Kremers (Birel ART/TM) and the Italian Giuseppe Palomba (Croc Promotions/TM) ended close to Puhakka instead.

The battle is still open in OK, where the Scott Dexter Patterson (KR/IAME), fifth in the standings, managed to post the Pole position in 46″541 while the classification leader Lorenzo Travisanutto (KR/IAME) was third behind his nearest rival, Dino Beganovic (Tony Kart/Vortex).

The values in 60 Mini are all subject to change. The Brit William Macintyre (Parolin/TM) didn’t score any results. The Bulgarian Nikola Tsolov went quickest instead in 53″452, leading the Belgian Douwe Dedecker (both on Parolin/TM) and the Pole Jan Przyrowski (Luxor/LKE).

A lot of winners in the Initial heats

In the KZ2 qualifying races, Anthony Abbasse came back to the fore winning one run as did Giuseppe Palomba. Dexter Patterson and Lorenzo Travisanutto had a distant challenge in OK as they won one heat each. Four different winners widened the list of contenders in OKJ: James Wharton (FA Kart/Vortex), William Silverholm, Artem Severiukhin (both on Tony Kart/Vortex) and Jamie Day (Exprit/Vortex). In 60 Mini, the two wins of Douwe Dedecker were followed by those of Joel Bergstrom, Nikola Tsolov (all on Parolin/TM), Dmitry Matveev (Energy/TM) and Flavio Olivieri (KR/TM), that won one heat each.

The Qualifying Heats will resume this Saturday morning from 10:00. As for every event in the WSK calendar, The RaceBox provides you with a special page featuring live timing & streaming (on Sunday) brought to you by WSK Promotion.