VDK Racing concluded October on a double high with victories in two different competitions last weekend! While Marcus Amand scored an astonishing OK win in the second round of Champions of the Future under the sun of Portugal, Elie Goldstein and Sam Balota offered the Belgian team a 1-2 and the X30 Senior title in the IAME Series Benelux at Mariembourg! 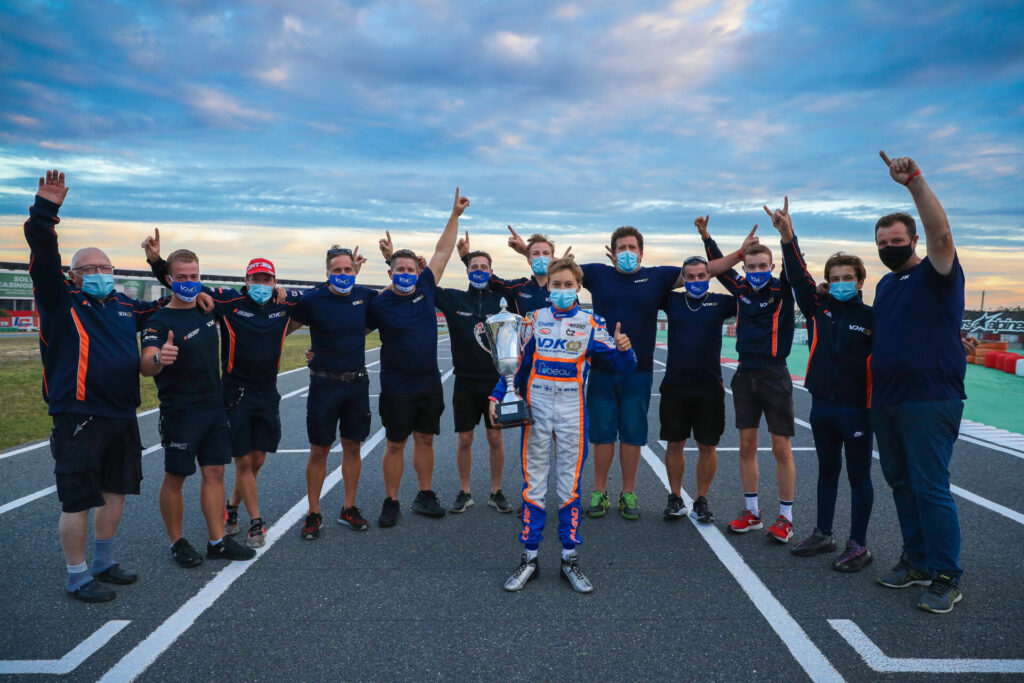 VDK Racing celebrates a fruitful weekend with convincing wins in Portugal and Belgium (Champions of the Future, © 2020, Alexandros Vernardis / The RaceBox)!

OK: Amand on a charge at Portimao

Marcus Amand showed a great deal of pace as early as Friday onto the Portimao circuit, host of the last round of RGMMC’s Champions of the Future series. Fifth-fastest in his group, he then finished third and sixth in his heats. Qualified 20th for the prefinal, Marcus didn’t save his efforts and passed seven rivals up to 13th place. Motivated like never before, he made a perfect start in the final and quickly drove his way through the field. The fastest on track, he took the lead from lap 6 out of 16 and kept it until the chequered flag! With this victory, which earned him the fifth place overall in the standings, Marcus affirms himself as one of the contenders to keep an eye on in the race for the world title next weekend!

Florian Rousseau-Ricci also put on a great performance on the Algarve kart circuit. Eighth-fastest in his qualifying group, the young Frenchman became more comfortable throughout the weekend. After a more complicated Saturday, he found the right pace in the prefinal where he passed seven drivers, before pulling off a 13-place recovery up to ninth in the final! Hugo Besson would have deserved to be in the last race. While his pace on the Portimao layout was undeniable, with up to 16 positions gained in his first two heats, a less troubled qualifying and a bit more luck at times could have seen him further up the weekend’s rankings.

Junior: learning curve on the rise

VDK Racing‘s Junior drivers kept building up their experience of a track they knew nothing about until a few days ago. Ariel Elkin had a weekend made of happy endings, including a fifth and two sixth places in the heats, and missed chances. The young Israeli kept his head down and grabbed the victory in the second chance heat, but luck wasn’t on his side again in the prefinal and final. Augustin Bernier, tenth-fastest in his group on Friday, came close to the top 10 several times in his heats and punctuated his week-end with a fastest lap. Antonio Leite also showed some good pace in the qualifying races, where he passed a dozen other drivers, as well as Alessandro Giusti and Maxens Verbrugge whose progress on the fast Portuguese circuit augurs interesting perspectives for the upcoming Junior World Championship.

“This success is above all down to the team,” Eric Verdaasdonk, Team Manager of VDK Racing, sums up. “Marcus won but Florian and Hugo also fought hard, and this victory is the result of a lot of hard work from everybody. Our Juniors went through some difficulties but have worked hard to find their marks and the right set-up for the World championship. So, we are satisfied, although there is still some work to do to be where we want.”

VDK Racing colors also floated last weekend above Belgium’s Mariembourg circuit, host of the final race of IAME Series Benelux. Elie Goldstein took the national title in X30 Senior right after the qualifying heats that he concluded in third place. Relieved for the final, the Belgian dominated the race and could celebrate his title on the highest step of the podium. Sam Balota completed VDK Racing’s success by recovering from 11th to second, which gave him the Vice-Champion title for his first season with the team! Special mention also to Olivan Fayt, author of his first pole position in X30 Junior, second overall in the heats with a maiden victory and one of the fastest in a Final that he finished in ninth place.

“That’s another great result for the team” Eric Verdaasdonk cheers. “Not only with Elie and Sam but also Olivan Fayt who took the pole and won his first qualifying heat. Without a small corridor mistake at the start, he could have confirmed his pace in the final but it’s still an excellent performance! Hats off also to our Chief mechanic Lucas Abras whose supervising role enabled our drivers to perform well during the whole competition.”

With such a successful weekend in the bag, VDK Racing can now look forward with great confidence to the ultimate goal of its 2020 season: the FIA Karting World Championship – OK/Junior, from November 6th to 8th at Portimao!