Great performances for the Tony Kart Racing Team and well-deserved podium for Alex Dunne on the circuit of Genk in the second round of FIA Karting European Championship – OK – OK Junior, despite the difficult weather conditions. 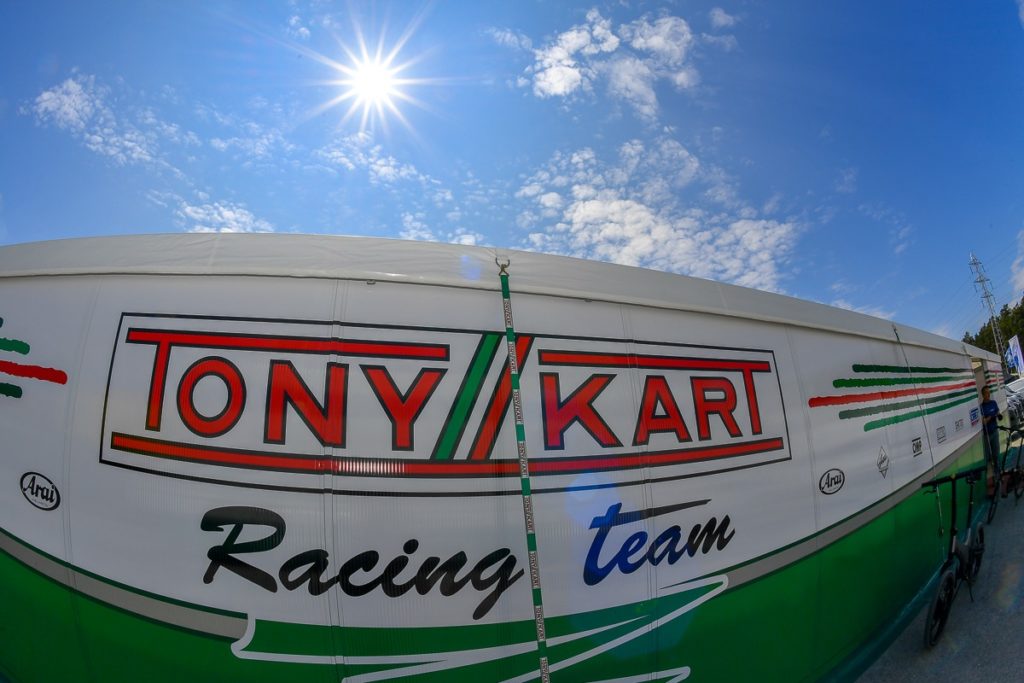 On the occasion of the second round of FIA Karting European Championship, the Tony Kart Racing Team had to face up the unfavourable weather. However, despite the difficulties, our drivers once again showed off their tenacity and their ability to achieve excellent results by fully exploiting the material at their disposal.

Nikita Bedrin and Alex Dunne were the protagonists of an almost perfect weekend. Respectively first and second of their groups in the tough and wet Qualifying Practice on Friday, the two Tony Kart drivers were the authors of great performances on Saturday on a not perfectly dry track where the Tony Kart Racer 401 R chassis powered by Vortex did very well. Nikita Bedrin conquered four victories in the Qualifying Heats, definitely getting the pole, while Alex Dunne gained three victories and a 2nd place.

Both our drivers did also very well in the Final. Dunne ended second for only 6 tenths after leading most of the 19 laps, while Bedrin managed to brilliantly defend his third place after an intense fight. Unfortunately, a penalty dropped back to the fifth position after the finishing line.

The race for Josep Maria Martì was harder due to a non-perfect Qualifying Heat. Despite this, our Spanish standard-bearer didn’t lose heart and made the most of the material by OTK at his disposal. Once again, he proved to be up to the situation by repeatedly placing himself in the top ten in the Heats and recovering 10 positions in the Final.

The general rating after two championship weekends is excellent with all three drivers of our team in the top ten: Dunne is third, Bedrin fifth and Martì tenth.

The performances in the OK category were less brilliant as the rain compromised the Qualifying Heats of Matheus Morgatto, Ryan Li Mingyang, and Sebastian Montoya. It was better for Noah Milell who placed himself in the top 20. Starting from the backlines, every heat was a battle to recover positions against a fierce line-up and with an important presence of expert drivers.

Morgatto was the author of a successful undertaking in his last race by conquering the 2nd place after recovering 14 positions, while Montoya managed to get twice into the top ten by skilfully exploiting the drivability of the Racer 401 R. Despite the placings, however, they both couldn’t enter the Final.

Milell, instead, managed to run the Final after gaining a second, a fifth and an eighth place in the Heats. The start from the second part of the line-up didn’t make the race easy for our standard-bearer but, despite the pouring rain which made the last phases of the heat even more excited, Milell ended 15th after a great comeback of 12 positions.

The quality of the OTK material was strongly reaffirmed by Dino Beganovic (WARD Racing) who brought the Tony Kart Racer 401 R powered by Vortex onto the third step of the podium at the end of a weekend where he had always played a leading role.

The Tony Kart Racing Team will be back on track with the OK and OK Junior categories for the third round of the FIA Karting European Championship scheduled on the Kristianstad circuit in Sweden, from 30th May to 2nd June.