One week after its 24-Hour car race, Dubai roars once again this weekend with another major racing event, this time on the karting scene with the famous O-Plate taking place for two days on the Kartdrome of the national circuit. 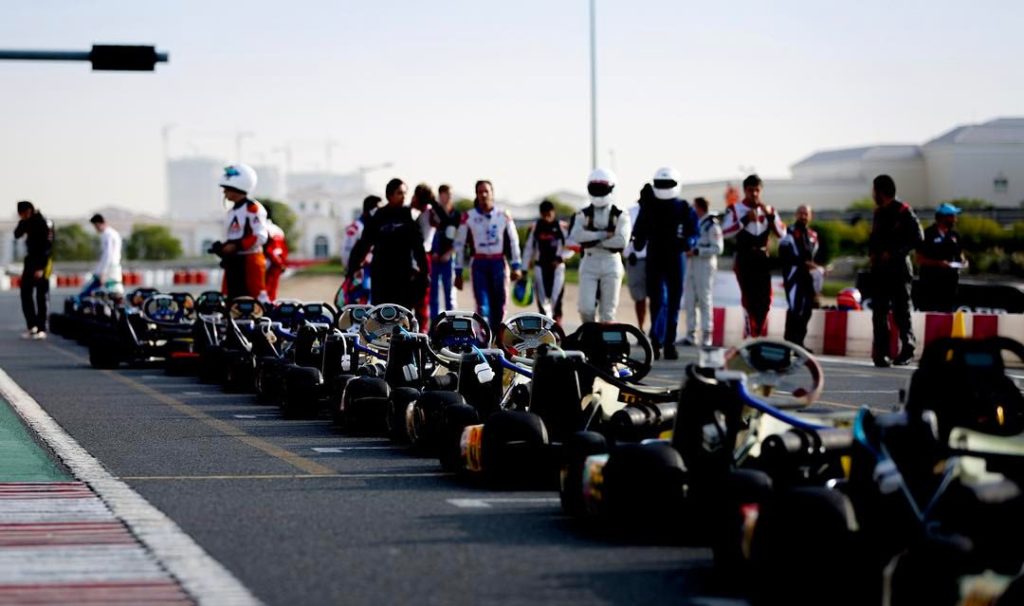 The O-Plate is the United Arab Emirates’ annual big weekend for professional kart racers held at the Dubai Kartdrome. The event sets local talent up against international drivers for top honors of becoming Dubai O-Plate Champions on the world-renowned circuit.

The Dubai Kartdrome answered the call by many drivers who wanted to challenge for a championship but without the pressure and expense of a full season campaign. The Dubai O-Plate event fulfills that aspiration for two race-filled days every January.  In addition, the track pulls together a large of attractive prizes that will be awarded to the top drivers in each category.

The winter temperatures in Dubai are normally in the mid (Celsius), which provides an ideal opportunity for European teams to test and race when conditions back home are significantly colder.

All conditions are met to perfectly start the karting season, and victory in the Grand Final of each class guarantees a ticket to the IAME International Finals at Le Mans in October. So with a lot to play for, and several other prizes on offer – including a test drive in an FIA Formula 4 UAE car – awaiting the Dubai O-Plate champions, let’s have a look at the likely contenders.

One of the favorites heading into this weekend must be Indian ace Shonal Kunimal whose level of performance in the UAE IAME Series speaks for himself with eight wins from nine starts so far. His opposition will be fierce though, as Italy’s Nicholas Stura – who was fastest of all at the recent Sahara Cup – is sure to be stronger than in previous rounds.

Another name to keep an eye on is Kareem Azzi, who lies just behind Stura in the series standings, whilst both Emirati star Mohammed Al Qassemi and Leonidas Peruzzi of Greece are close matches in terms of speed. The only other driver to take a Bambino win in the UAE IAME Series is Romanian youngster Lennard Titica that we have seen regularly fighting in the top six at last year’s event.

This year’s Bambino O-Plate champion will be awarded with a Parolin Cadet chassis complete with IAME 60cc Cadet engine, as well as a month’s testing with the highly rated George Gibbons Motorsport squad.

It’s going to be hard for anybody to beat Filippo Parmeggiani in his current form, as the Italian currently tops the standings for both Cadet and Rookie classes in UAE IAME (both will share the same field). But bear in mind that, 12 months ago, Maison Rudman was the fastest driver of the category on that very track. Zachary Stimpson was never outside the top 3 in last year’s Bambino field and is almost certainly going to be bidding for more. British drivers Luca Houghton and Oliver Naylor are also likely to come out fighting from the very start of the weekend.

There are several racers in contention for the Cadet honors this year, with so many strong names in the running including Sebastian Murray – who is currently 2nd in the UAE IAME standings – and UAE Rotax Micro Max International winner two years ago Harry Hannam.

Three of the fastest young hotshots from South Africa will be bidding for glory too: Enzo Rujugiro, Anesu Maphumulo Luviwe Sambudla. One of the stars of the Sodi World Series is in action too, with Federico Al Rifai hoping to continue his recent run of three consecutive Junior Cup wins. It’s also worth keeping an eye on Maximilian Dexter, another strong Brit.

European talent is burgeoning with Italy’s Sofia Necchi sure to push for victory, Germany’s Benjamin Wade will want to threaten the podium runners and also Ylies Maillard will tread in the footsteps of GT racing father Guillaume. The eventual winner can enjoy IAME World Final tickets for Le Mans in October, and a weekend’s racing run by the Energy Racing team at the Trofeo Andrea Margutti at Lonato on the first weekend of April in the Mini 60 category.

A few drivers have chosen the Dubai O-Plate as a starting point for what could be a pivotal season. Cian Shields made an impressive start to his 2018 IAME campaign in Valencia and newfound confidence over the year may be the catalyst to making him a winner in Dubai. But there will be pressure from Morocco’s top young ace Suleiman who has been making waves in Europe and even further afield. Jamie Day will have local knowledge on his side and will certainly be tough to beat, but the trio of drivers from the BirelART Middle East squad want to show their mettle and Abdelrahman Fraij and Fahed Al Khaled will wave the Jordanian flag proudly as Abdelrahman Al Dullami will use his expertise of the circuit to good effect.

Alfie Rigby became Super One Honda Cadet champion back in the UK in 2018, and his first International event as a junior could be the sign of things to come but there are others who could spoil the party. French racer Alice Haynes has always been a tough adversary in the Middle East, and Khaled Saab’s feisty IAME Euro campaign should stand him in good stead on home soil. Austrian Constantin Reisch will be hoping to give the Brand Racing team a brilliant victory after his triumph in last year’s event, and with other top talents such as Egypt’s Seif Al Naggar, Spaniard Andrey Ouziel and Karl Saad of Lebanon snapping at their heels, it could be a very unpredictable weekend.

Not only will the winner receive a race entry for the IAME World Finals at Le Mans, but thanks to the BirelART Middle East team, they will race for the squad at the event in October with a fully funded drive.

With plenty of international talent, the X30 Senior battle could have many twists and turns ahead. BirelART’s Middle East squad is being captained by the likes of German star Valentino Fritsch and Jordanian racer Manaf Hijjawi, both who have enjoyed strong 2018 campaigns. Elliot Harvey is also eager to continue his comeback charge in a convincingly fast manner, whilst former BirelART UK Junior vice champion Harry Barlow has regularly proven to be a qualifying specialist and if he bags pole position, he could be very hard to catch.

Joey Hanssen will be hoping the Dutch flag flies high by Saturday afternoon and his credentials stand him in very good stead, whilst Brazilian ace Liam Crystal could give CRG plenty to shout about. India’s new hero Kyle Kumaran could well be exactly the man to bring X30 Senior glory to the Brand Racing outfit, whilst local man Alex Wareing has the insider knowledge of the Dubai Kartdrome that could give him the edge. There are other racers to keep an eye out for such as Mexico’s Mauricio Hernandez, Bahrain’s Rashid Al and Switzerland’s Denis Bahar as all have the potential to wrap up the O-Plate, but not without a threat from Romanian driver Vlad Dobritoiu who along with British teammates Joshua Ingle and Myles Fleming will surely be contenders from the early stages of qualifying.

The MLC and Dojomoto squads are teaming up to offer the X30 Senior winner the chance to race in their colors at the IAME International Final at Le Mans, and the XCEL Motorsport team will also reward the O-Plate champion in Senior with a test day at the Dubai Autodrome in their FIA Formula 4 UAE car.

Sharing the grid with the Senior drivers will be the inter-class battles of the Master category. Local talent comes in the form of Craig Shenton and Rami Azzam, but with Greek hotshot Dimitris Papanastasiou and fast Russian female Ekaterina Kazakova in the all bets are off.

Janno of Germany has had an impeccable in the UAE IAME Series thus far with two final victories out of three and appears to be the man to beat, but his closest rival in the standings Hussain Umid Ali of Oman won’t be prepared to come second place when it really counts. The two Indian charges Taher Barbhaya and Prashant Kochhar could well become factors if setup goes their way in the run-up to the main event, and last year’s winner Dario Rubio is back again to defend his crown and hopefully return to the IAME World Finals at Le Mans, as whoever wins the class this weekend can expect a free ticket, as well as a TAG watch!

The gearbox categories could end up as a bit of a walkover for the talented sisters Amna and Hamda Al Qubaisi as X30 Shifter is an important part of their career progression, particularly with Amna now emerging as a candidate for the W Series. Their team-mate Saeed Al Ali will be unlikely to prepare to be beaten by them, whilst Italian star Silvio Musso could snatch it from them all with German talent Maxi Fleischmann also set to be a major character in the pecking order.

A depleted veteran field could be just what the doctor ordered for local hero Walid Al Qassemi but he won’t have it all his own way with Indian star Brad Dias likely to be part of the action throughout. In addition to the IAME Finals ticket and a TAG Heuer watch, the Shifter champion will also have a day’s assessment in the YMC team’s Toyota TRD 86 GT racing car at the Dubai Autodrome.

The weekend will also feature action from the Sodi World Series Senior and Masters Cup.

The full schedule of the event is available here.

Click here and here to find the Sportive and Technical regulations.