The exciting story of Sodikart and endurance racing has been enriched by a new and particularly brilliant chapter at the 34th edition of the Le Mans 24 Hours Karting, held on the last weekend of September. With many of its chassis competing, Sodi has achieved excellent results at the most famous endurance karting race in the world. 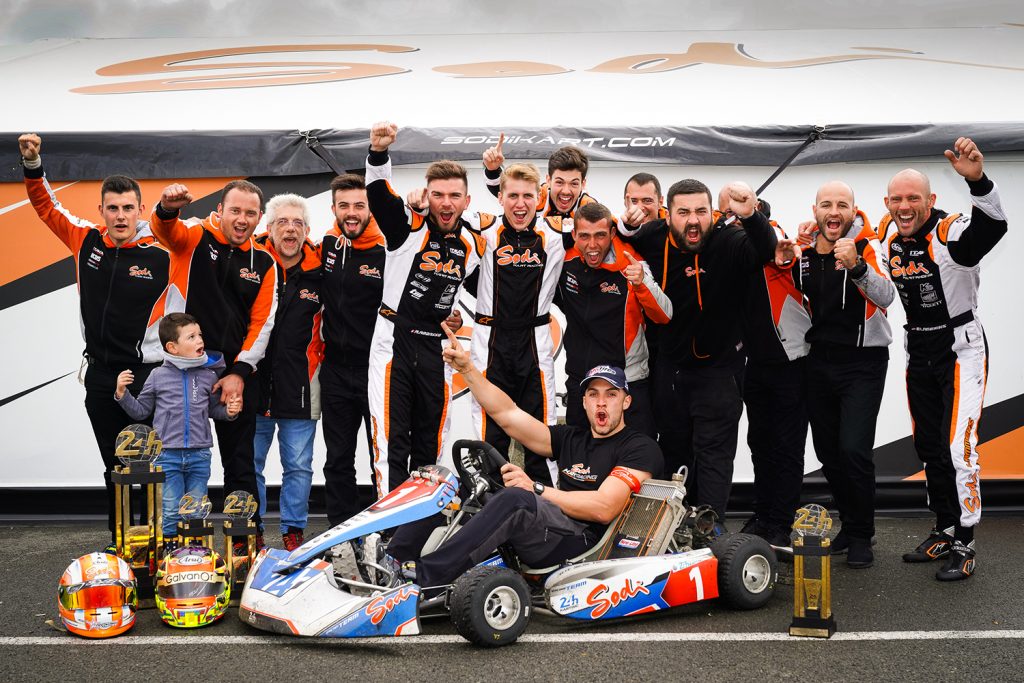 The factory Sodikart GP1 team won the overall classification with its second consecutive FIA Karting Endurance Championship, while the GP2 class concluded with three Sodi chassis on the podium.

The 24 Hours Karting field was the culmination of the rise in competitive strength for the world’s leading kart manufacturer. Sodi chassis accounted for more than 50% of the entry at Le Mans, a significant increase since the previous edition. The performance of the French chassis, coupled with their high-quality manufacturing, convinces more and more endurance teams, a particularly demanding discipline for equipment.

As part of the FIA Karting Endurance Championship for OK-powered GP1 karts, the official Sodikart team was confronted by the top endurance racing specialists. Sodi Racing Team’s Team Manager Julien Dexmier used Nicolas Scelles’ experience to prepare for the event, while Jordan Grégoire managed the team during the weekend. As in 2018, the engine was built by the TM Racing factory and closely attended to by Franco Drudi, the top technician. Regarding the drivers, the three official Sodi drivers Anthony Abbasse, Bas Lammers and Adrien Renaudin were joined by a young and increasingly convincing driver in international KZ2 within Team CPB Sport, Jean Nomblot.

The No. 1 – Sodikart quickly took the lead on the first lap before being slowed down by a minor mechanical problem (broken valve). The team made it a point of honour to return to the front ranks without delay and to lead against very determined opponents while following a 24-hour race strategy. Sodikart progressively outdistanced its rivals in the late evening and had a lead of almost ten laps in the early morning. The rain, which appeared around 8:00 am, couldn’t stop the triumphal march of the Sodikart team. After 1446 laps, more than 2000 km of racing, Bas Lammers crossed the finish line at 3:00 pm as the winner with 13 laps ahead of its immediate rival, the No. 55 Rouen Espace Karting, also using a Sodi chassis. Another Sodi, No. 24 Wintec, set the fastest lap in the race.

The battle proved tighter in the GP2 category. There were repeated lead changes at the beginning of the race, then during the night without the leaders being able to maintain their advantages during the adventures of the race. Rain in the early morning continued to change the situation. The poleman No. 72 SO 24 KMD managed to take control finally after 20 hours of racing. It was another significant success for Sodikart in winning the GP2 class, six laps ahead of No. 76 Circuit Europe, the first Master, and No. 36 Cormeilles KMD, for a 100% Sodi podium.

Bertrand Pignolet, the President of Sodikart, was delighted by these new victories in addition to an already very full record of 2019: “We set ourselves the goal of retaining the FIA Karting Endurance Championship won last year. The victory of our team was even more impressive this year, despite strong French opposition. I want to congratulate our drivers as well as all the team members, who have done a great job. I am also very satisfied that the quality of our products allows other teams to shine as was the case in GP2.”