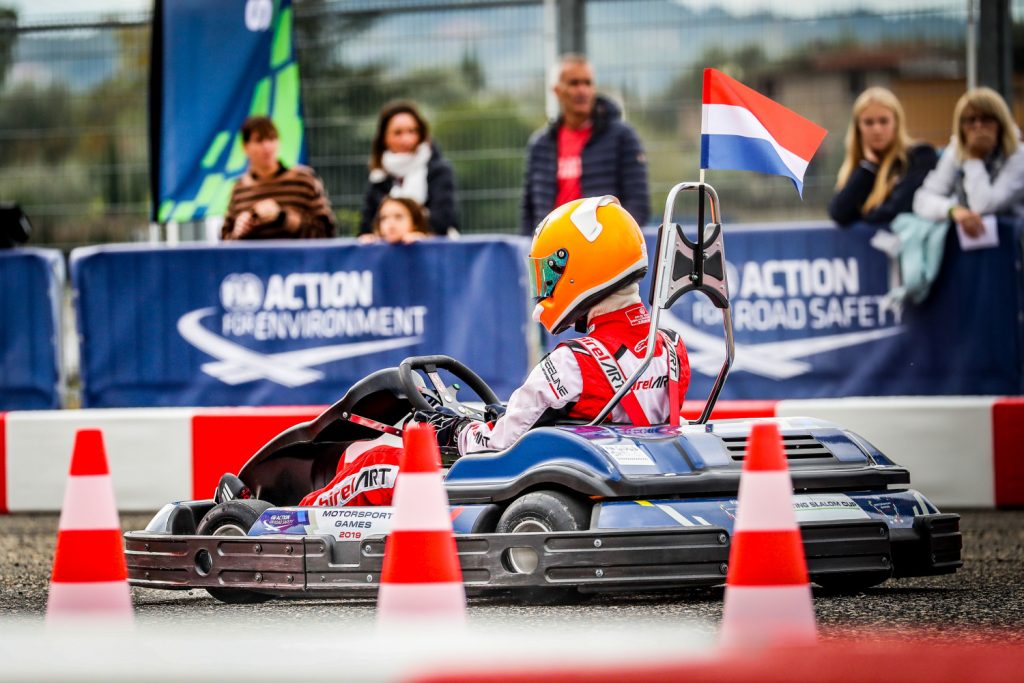 The medal hopefuls were whittled down to eight nations last Saturday with just three rounds remaining on Sunday to decide which young duo would leave Vallelunga with the gold.

Tipped as favourites before the event – and even more so after a stellar showing on Saturday – Germany were dumped out at the quarter-final stage by Portugal. The combination of teenage twins Matilde and Martim Fidalgo prevailed, though a mere 0.731s separated the two nations when each driver’s times had been combined.

The Netherlands did for Austria thanks to Girls on Track Karting Challenge finalist Pothof and teammate Van Loenen, while Russia’s march towards the medal showdown continued unabated as the pairing of Olesia Vashchuk and Vladislav Bushuev defeated Croatian duo Stefani Mogorović and Sandro Ivanjko. In the fourth quarter-final, Belgium bested Belarus thanks to another strong showing from Manon Degotte and Antoine Morlet.

In the first semi-final match-up, the Netherlands saw off Portugal, with Pothof and Van Loenen triumphing by 19.430s on combined times. Belgium booked their spot in the final next, defeating Russia by 12.751s to set up a Low Countries derby in the gold-medal showdown.

Before that, however, there was a bronze medal on the line as Portugal did battle with Russia. Despite missing a shot at gold there was no dip in performance from Vashchuk and Bushuev, who secured Russia a second medal of the FIA Motorsport Games after Ilia Fedorov captured bronze in Saturday night’s Drifting Cup contest. Vashchuk set the fastest time over the bronze medal match, completing the course in 52.504s with no penalties.

And so to the final showdown for the gold medal. It was a close-run contest, with Morlet proving to be the star performer for Belgium by setting a blistering best of 48.929 on the first run. The Dutch were close on both, however, and with Pothof and Van Loenen producing consistent efforts it was they who emerged victorious. The winning margin was a mere 3.925s, but it was enough to give the Dutch their first medal of the FIA Motorsport Games.

Nina Pothof, Team Netherlands: “We are very happy to be here and to represent the Netherlands. We were a bit unlucky in the beginning but we still made it to the final and won, so we’re very happy.”

Bastiaan van Loenen, Team Netherlands: “It’s beautiful to be here, to represent our country and of course to win a gold medal. We started with a lot of bad luck but we worked our way through it and ended up first, so I think it’s been a good weekend.”

Manon Degotte, Team Belgium: “I think that I could have done a better job during the final as I struggled to manage my stress, but it remains an incredible experience. I wasn’t expecting to have such a great result!”

Antoine Morlet, Team Belgium: “Overall it was a very good weekend. We managed to be competitive from the first sessions and did a good job. We dipped during the final but we kept on fighting, ending up with a really good second place for Belgium.”

Olesia Vashchuk, Team Russia: “This was a very difficult weekend for us. We started in eighth place and now we’ve finished third, which I think is great progress. We are very happy about this. We lost to Belgium in the semi-final but we are still happy to be third and not fourth!”

Vladislav Bushuev, Team Russia: “This is an amazing result. It has been amazing for me because rain is my favorite weather [for driving]. We are really happy.”